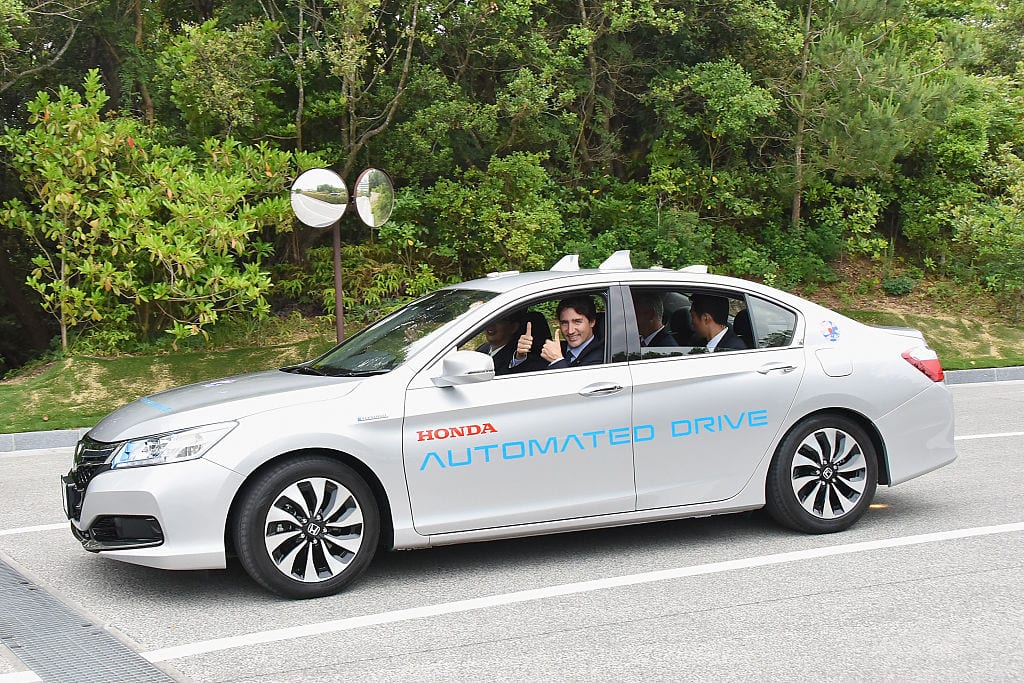 Back in 2017, Justin Trudeau was speaking at a town hall event in Peterborough, Ont., and was asked about his government's decision to approve an extension to Kinder Morgan’s Trans Mountain pipeline, which seemed in tension with his environmentalist commitments. He replied:

We can’t shut down the oil sands tomorrow. We need to phase them out. We need to manage the transition off of our dependence on fossil fuels but it’s going to take time and in the meantime we have to manage that transition.

This was widely considered to be a gaffe of the Kinsley variety, which is to say the type in which a politician "accidentally reveals something truthful about what is going on in his or her head." Trudeau was acknowledging that somewhere in that woolly brain of his is the desire to shut down Canada's oil sands, the backbone of Canada's western economy, and a key sector of the national economy as well.

The representatives of affected Canadians were compelled to respond. Rachel Notley, whose socialist New Democratic Party was enjoying a rare period in power in Alberta, said, “[Our] oil and gas industry and the people who work in it are the best in the world and we’re not going anywhere, any time soon.” Jason Kenney, who would replace Notley as premier two years later, asked whether Trudeau's "phase-out" meant "he wants to hand-over all global oil production to Saudi [Arabia], Iran, Qatar, et al?" Then-opposition leader Brian Jean replied, "If Mr. Trudeau wants to shut down Alberta's oil sands... he'll have to go through me and four million Albertans first." The pushback was such that eventually -- that is, more than a week later -- Trudeau walked back the comment, saying that he "misspoke," and that he had “said something the way I shouldn’t have said it.”

Fast forward to our present calamity, which has seen Canada's oil and gas industry pounded by a perfect storm consisting of the COVID-19 pandemic and its attendant lockdowns on the one hand, and the Saudi/Russian production war on the other. Back in the middle of March, as the nature of these twin crises was becoming clear, news began to surface about Ottawa's proposed response.

The federal government is preparing a multibillion-dollar bailout package for Canada’s oil and gas sector that is expected to be unveiled early next week, sources say.... [G]overnment insiders are saying little about the details... but the oil and gas sector can expect to get more access to credit, especially for struggling small and medium-sized operations, and significant funding to create jobs for laid-off workers to clean up abandoned oil and gas wells.

One senior Alberta source said the province is expecting Ottawa to provide $15-billion in relief to an industry that has been hammered by the COVID-19 crisis and the price war between Saudi Arabia and Russia that has cratered oil prices and energy-company stocks.

Finance Minister Bill Morneau assured the nation on March 25th that the government understood that "the energy sector is in a particularly challenging situation," and that the rumored bailout was imminent, not "weeks [but] hours, potentially days" away.

Well, not hours or days, but nearly a month later details of the relief package were made public, and they were underwhelming to say the least. Reports of a $15 billion package were off by almost an order of magnitude, as the actual package came to $1.7 billion, largely geared towards environmentalist priorities. Whereas oil and gas representatives had been asking mainly for new lines of credit and an easing of regulations, the actual package earmarked the vast majority of dollars for the remediation of abandoned oil wells and methane-gas emission reduction.

As Grant Fagerheim of Whitecap Resources put it, “This is not going to do anything... If this is as good as it gets, it will do very little or nothing to assist with operations for companies.”

What changed? Well, for one thing, the environmentalists got involved. Around the time of Morneau's pledge, a coalition of environmentalist groups wrote an open letter to Trudeau arguing against such a package, saying

"Giving billions of dollars to failing oil and gas companies will not help workers and only prolongs our reliance on fossil fuels."

They seem to have had an influence. As one oil executive observed to the National Post:

[T]he announcement appeared to adhere closely to Ottawa’s tendencies around environmental messaging, rather than addressing immediate concerns on private sector balance sheets. “I think they made the calculation that it would be politically unpalatable in Ontario and Quebec to provide direct supports to oil and gas."

Of course, Canada's environmentalist groups were elated and were quick to offer praise:

Josha McNabb of the clean-energy think tank Pembina Institute said well cleanups and methane reductions are good steps toward reorienting Canada’s economy toward a low-carbon future. “Those are types of things that are going to lead to an oil and gas sector that is more competitive because it’s cleaner, and also (develop) the kind of expertise that is going to be in demand,” she said.

Even more to the point was the statement put out by Tzeporah Berman of Stand.Earth, which read,

Today, Prime Minister Trudeau made clear that Canada’s bailout package will prioritize addressing the climate crisis and building the cleaner, safer economy we need. This is the kind of leadership the world needs .… This bailout announcement is a major turning point for oil and gas politics in Canada.... [W]inding down the oil and gas industry [is] a hard, but necessary part of achieving [Canada's Paris Agreement climate] targets.

Of course, Trudeau's cabinet is itself brimming with borderline enviro-activists, including Catherine McKenna, Navdeep Bains, and Steven Guilbeault (the latter a full blown activist, who spent ten years with Greenpeace before running for office). None of them needs much pressure -- public or private -- to leave the resource sector out in the cold. No doubt when Morneau said that relief was "hours, possibly days" away, that was based on his perception of the negotiations as they stood at the time. Perhaps he was even trying to hurry his fellow ministers along. But he appears to have gotten ahead of his skis, and in the end the greenies won out.

Furthermore, despite requests from industry representatives, the Trudeau government insisted on going ahead with its plan to double the Federal Carbon tax and merely delayed the implementation of their Clean Fuel Standard by a few months.

“Just because we are in one crisis doesn’t mean we can forget about the other crisis, the climate crisis, that we’re facing as a world and as a country,” said Trudeau.

It must be mentioned that one request from the resource industry was included in the relief package, namely expanding credit availability for small and medium sized energy companies, and there has been talk of further assistance aimed at ensuring that the industry maintains liquidity. There's a good argument for such interventions -- since government ordered lockdowns are a major contributor to the industry's plight, it makes sense that the government would help shoulder the burden while oil and gas companies work their way through this. And it's worth noting that, as the energy sector has contributed more to the Canadian economy over the past 20 years than any other, a lot of that money comes from oil and gas to begin with.

Even so, the core of this package makes plain the Prime Minister's priorities. Weighted as heavily as it is toward capping off old wells, it serves mainly as an instruction to an ailing industry that it had better restructure itself with an eye towards closing up shop for good. Rahm Emmanuel famously advised Barack Obama in 2008 to never let a good crisis go to waste, and Trudeau and his ministers appear to have taken that to heart. Never mind that the resource sector makes up roughly 10 percent of the Canadian economy; that, as this pandemic has reminded us, it contributes the material to make personal protective equipment and ventilators; or that the Green Energy Industry on which they have pinned their hopes has been shown to be a sham. This is their moment. They will not let it pass.