Do MAGA Republicans Cause Street Crime? 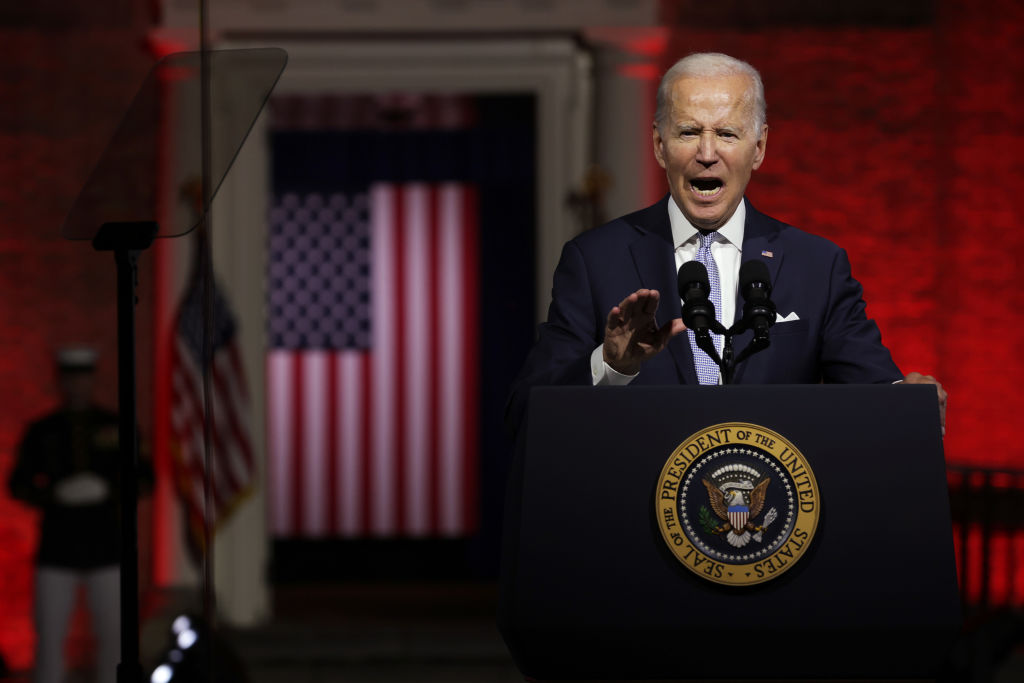 "An extremism that threatens the very foundations of our republic."

If you were to judge the state of affairs in today’s America based solely on President Biden’s assessment, you might assume the greatest threat to your personal safety is that posed by all those “MAGA Republicans” he so logorrheically denounced in his speech to the nation from Philadelphia last week. “MAGA Republicans,” he said, “do not respect the Constitution. They do not believe in the rule of law. They do not recognize the will of the people.”

Such a curious speech it was, with the words inspired by Vladimir Lenin and the cinematography by Leni Riefenstahl. The president mentioned MAGA Republicans 13 times before he finished, with the references growing more and more ominous as he proceeded. “MAGA Republicans,” he darkly intoned, “look at America and see carnage and darkness and despair. They spread fear and lies – lies told for profit and power.”

And the viewer was left to think: “Sinister bunch, those MAGA people. I must secure the doors and windows and be on the lookout for them.”

But if you were to go out on the streets of America today in search of actual acts of violence committed by this group, which the president came just short of labeling as Enemies of the People, would you find any? And when you did encounter genuine carnage and despair, when you witnessed actual affronts to the rule of law, which in most cities wouldn’t take long at all, do you think you could attribute any of it to MAGA Republicans?

If your senses can bear it, take a few minutes to peruse the Twitter feed from Street People of Los Angeles, one of several feeds where you can find videos, photos, and news stories illustrating the lawless, dystopian depths to which large swaths of Southern California have descended. As you watch the videos, ask yourself how many of the people shown committing the various acts of depravity are MAGA Republicans, and how many would be more inclined to vote for Democrats?

Transient sucker punches elderly customer eating lunch alone at a cafe in Hollywood, steals his wallet and phone. Hero steps up and takes the thief down. @amcresttechnologies on YouTube @enuffisenuffla pic.twitter.com/r9Twr0O0Si

Look closely at the hundreds of videos you can find on the internet of the recent phenomenon of street takeovers in Los Angeles, where crowds converge on major intersections and commandeer them into use as temporary raceways, occasionally leaving behind a looted convenience store and even a dead body or two when they move on. Do you see any clothing or bumper stickers betokening allegiance to the MAGA movement?

And of course it’s not just Los Angeles. Street takeovers, or “sideshows,” have become common elsewhere, Chicago, for instance, where responding police officers routinely come under attack from the mobs. Do you see any MAGA hats or T-shirts on any of the people shown committing these crimes, or do you think they’re more likely to vote for the party that’s run that city since the Earth cooled?

President Biden of course reminded us of the Jan. 6 riot at the U.S. Capitol, as we are incessantly reminded of it by his many servants in the elite media. We should brook no excuses for anyone’s criminal behavior that day, but neither should we overlook the wide variance in what that behavior was. It is true, as the president said, that some Jan. 6 protesters “brutally attack[ed] law enforcement,” but it is also true that the great majority of them are guilty of nothing more than trespassing, or even "parading," a crime most often punished by a modest fine. Let all the Jan. 6 protesters have their day in court without delay and let each be judged according to his own misdeeds, but to claim that even the most committed of them represented a clear and present danger to the republic, as the president did on Thursday, is beyond absurd.

And when discussing the menace posed by MAGA Republicans, it bears reminding that of those whose deaths have been attributed to the Jan. 6 riot, the only verified victim of deliberate homicide was Ashli Babbitt, an unarmed woman who, for no legal justification I am able to discern, was shot and killed by a U.S. Capitol Police lieutenant. Unlike any number of people killed by the police in recent years, Babbitt’s death aroused little curiosity in the press, whose members yawned when federal authorities declared the killing justified in a memo that was insulting in its cursory brevity.

There can be no gainsaying the perception that the law itself and the fervor with which it is enforced are sometimes calibrated so as to align with the interests of those in power. We have reached the point where Washington, D.C., and all its corridors of power are regarded among the opinion makers of the news media, the entertainment industry, and academia as the rightful province of Democrats, and that any time Republicans gain control of them it is regarded among those same opinion makers as a usurpation to be corrected by whatever means necessary, to include the mobilization of the FBI in the cause.

How else to explain President Biden’s fixation on the supposed dangers posed by MAGA Republicans while ignoring the very real mayhem committed by leftists? Was the effort to identify and arrest every last Jan. 6 protester commensurate with that directed at those who rioted at Donald Trump’s Jan. 2017 inauguration, and those who for an appalling 100 straight nights laid siege to the federal courthouse in Portland, Oregon? Was there a similar effort expended to bring to justice those who rampaged in cities across America following the 2020 death of George Floyd, even those who committed murder in his name?

Though ignored in President Biden’s speech and absent from any of his policy prescriptions, there is a very real violent crime problem in America today. We are lately told to be comforted by the fact that murder in the U.S. has declined from last year, but less comforting is the knowledge that this slight downward trend follows the massive increase that began in the summer of 2020—the Summer of George Floyd.

Neither the president nor his trusted stenographers in the media will dare talk about who is responsible for this bloodshed, but be assured it isn’t MAGA Republicans.

3 comments on “Do MAGA Republicans Cause Street Crime?”