The Malign Genesis of ESG - Part I

Courtesy of the World Economic Forum, of course.

In the weeks since the S&P 500 announced Tesla’s removal from its ESG Index while inviting Exxon to join, but leaving Chevron out, the incongruous nature of the environmental, social and governance (ESG) construct has never been more obvious. It reveals what some might consider proof of the fraud that ESG represents. But what exactly is ESG? Where did it come from? Understanding its genesis and purpose of ESG will clarify what it actually is, not what many purport it to be.

Beginning in 2000, the World Economic Forum (WEF) embarked on an initiative that over two decades later can only be described as a Trojan-horse attack on free markets, private property, and democratic institutions. Founded in 1971 by German engineer and economist Klaus Schwab, the WEF describes its mission in part as, "improving the state of the world by engaging business, political, academic, and other leaders of society to shape global, regional, and industry agendas." Agenda-shaping it seems can be transformational, for good or bad, and quite lucrative.

Well-funded and well-organized, what has grown from that initial effort over two decades ago, is a sophisticated network of NGOs, foundations, and nonprofit entities working to achieve unprecedented ideologically inspired political, social, and financial change inside America and throughout the world, using the ESG construct. 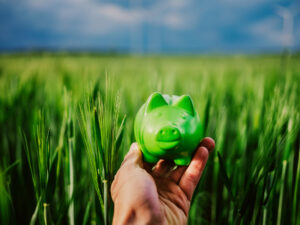 With the promise of profit, this network engaged key asset management and banking partners, including giants like BlackRock, Vanguard, and Bank of America. Together these activist profiteers, best described as the ESG/Industrial Complex, are engaged in an extraordinary effort to fundamentally undermine and replace free markets while circumventing democratic institutions of governance and lawmaking. Seeking to force companies into behavior based on political ideology—often in defiance of the best interest of their investors—the ESG Industrial Complex represents a nefarious source of boardroom bullying and attacks on industries with which they politically disagree but whose assets they seek to control.

Using the pretense of social diversity and environmental protection needed to repair damage caused by capitalism, this network established the ESG construct. It represents a geometrically increasing impediment to many industries and the larger corporate culture. Though nebulous and ill-understood by both Wall Street and Main Street alike, it constitutes competing frameworks, reporting systems, and scoring systems for environmental and social reporting—but it lacks continuity and a quantifiable measurement. A meta-analysis of more than 1000 studies on ESG performance found that, “studies use different scores for different companies by different data providers.” These self-ascribed arbiters of politically appropriate values, behavior, and outcomes intend to identify, scrutinize, and then using ESG scores, punish public and private companies—and eventually individuals—who do not agree to live by the network’s validation feedback loop.

Objectives articulated by one of the data collection members of the ESG network include:

Though not yet widely adopted in much of corporate America, ESG has been aggressively embraced by most publicly traded companies and the financial and banking sectors. Ninety-eight percent of America’s top financial companies now disclose ESG scores, and 82 percent include the information in their financial reports as of the end of 2020. Acting as ESG advisors, these banking and asset-management firms have been able to realize premiums for management and advisory fees. For these firms, ESG represents a lucrative revenue-generating spigot and a clever mechanism by which to gain control of capital and at scale, private property. It offers them a mechanism by which to redirect and control capital and property in ways that align with their political worldview.

After decades of coordination and collaboration, the network not only has well-defined initiatives and objectives, but also defined timelines to what they call a “transitioned world.” Success for ESG necessarily harms entire swathes of society in a free market, democratic system. It is a model intended for government to manage the means of production by “transitioning” the world toward increased regulatory control, social scoring, and communal property rights using the pretense of carbon emission neutrality—a model underpinned by socialist and communist principles, including a communal stake in for-profit companies and the development of a new financial system that directs capital flows to never-defined “global goals.” 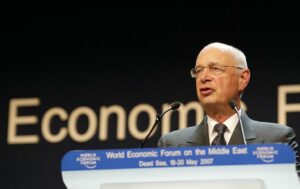 Schwab: A finger in every pie.

In its most recent report, “Accelerating the Rate of Change: 2021-2025”, the Carbon Disclosure Project, (CDP), one of the WEF-financed entities foundational to the development of the ESG construct, asserts: “all businesses—including private companies—need to overhaul their operations and ensure they will remain viable within environmental boundaries. Governments must set the example and provide the regulatory environment that supports and encourages responsible corporate action. Both businesses and governments alike must align their actions with equitable outcomes that alleviate unequal burdens created by climate change.”

These ESG collaborators are overt in articulating their intentions and objectives. In Part 2 tomorrow, I will reveal the keystone of the ESG construct and propose what must be done to render the movement impotent. I will consider stakeholder capitalism and the role economic capital holds in the fight ahead. I will explain why the domestic oil and gas sector is such a significant target by the ESG/Industrial Complex, and how controlling energy production is a necessary threshold for these activists to succeed. Finally, I will consider what Americans can do to stop this attack on our country and neutralize this threat to our way of life.