THE COLUMN: At Last, a Hill to Die On 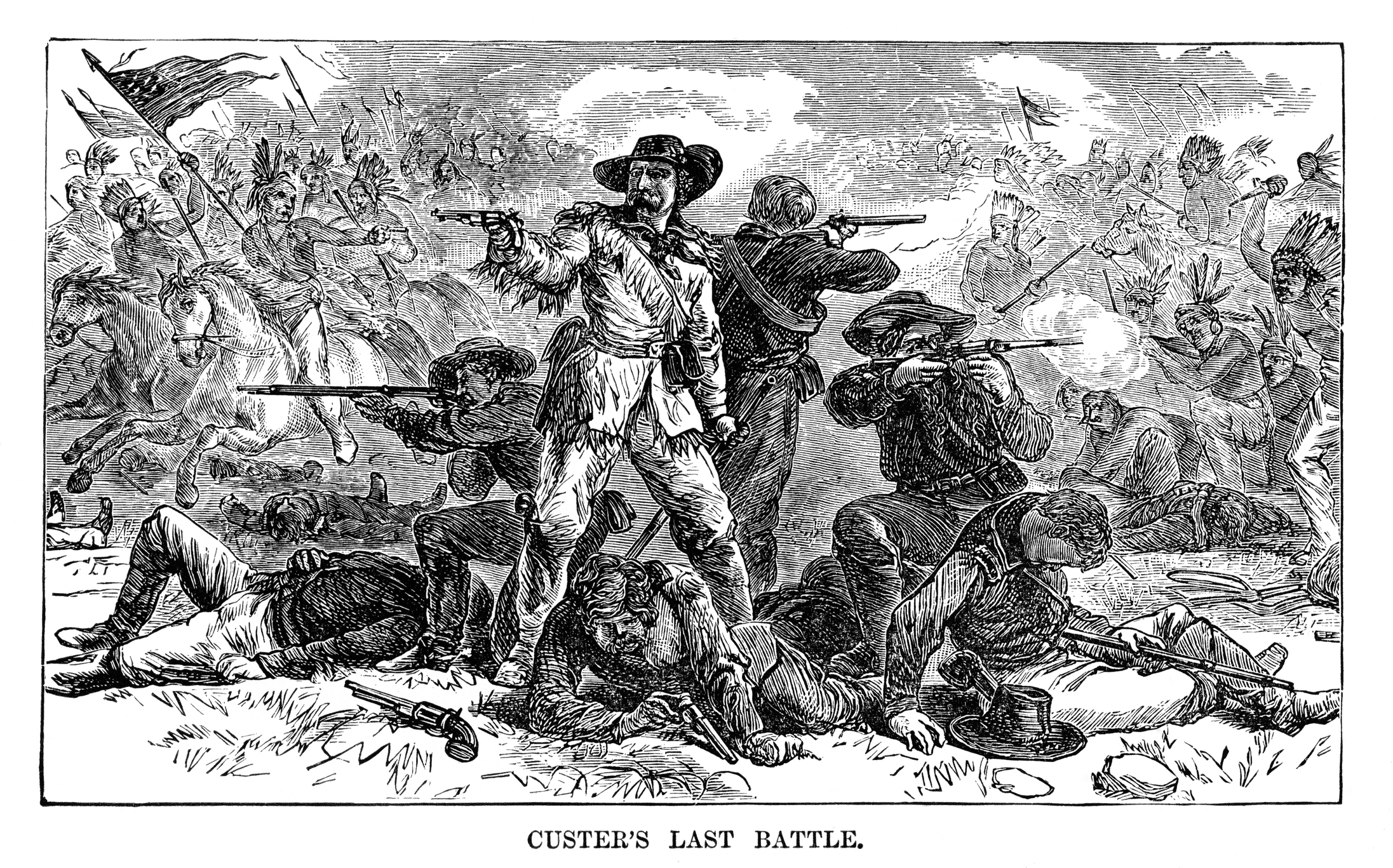 Know when to change generals.

So now the mask has dropped and, for the first time, the American people can see the modern Left in all its hateful, unadorned, vituperative, spiteful glory. Case in point: the announcement last week that the Department of Homeland Security—one of the excrescences of the Bush administration, cobbled together in its panic over 9/11—has created the "Disinformation Governance Board" in order to combat what it has, via its hitherto little-known Cybersecurity and Infrastructure Security Agency, already dubbed "mis-, dis-, and mal-information." Otherwise known as alternative points of view, but shut up, citizen.

From its Orwellian name to the repellant leftist virago of obscure origins named Nina Jankowicz who heads it (her Wikipedia entry lacks a precise date of birth, as well as her place of birth and any of the customary details about her family, ethnic and religious background; about all we know is that she's apparently married to a man named Michael Stein), this moral and political enormity cannot be allowed to stand. Especially given what we do know about Jankowicz, including her radical feminist inclinations, victim mentality, central-European/Ukrainian focus, and minimal accomplishment outside the progressive Hive Mind.

That video is from Oct. 27, 2020. Jankowicz, whoever she is, appeared twelve days earlier before Adam Schiff's Permanent Select Committee on Intelligence, which is about as partisan and anti-American a congressional body as currently exists. You can read her complete testimony just below, but here is some of what this "expert witness" had to say in the runup to the fateful president election:

I came to study disinformation through the lens of Russian influence operations. My work has led me to an unsettling conclusion: Not only have the U.S. Government and social media platforms all but abdicated their responsibility to stop the threat of foreign disinformation, domestic disinformation now runs rampant. It is amplified in the media, online, in the Halls of Congress, and from the White House itself. It does our adversaries' work for them, leaving us vulnerable to continued manipulation and leaving our democracy imperiled.

Today, I will outline three trends that exemplify the modern information space: The first is the increased use of information laundering to deliver foreign disinformation. Today, malign actors like Russia are increasingly amplifying their narratives by using authentic local voices or organizations to conceal the origin and to lend legitimacy to a given malign narrative. Perhaps the most well known example of information laundering, and one that this committee knows intimately, is the nexus of conspiracy theories related to Ukraine and Vice President Joe Biden. These unsubstantiated and misleading narratives, promoted by self interested and corrupt individuals seeking power and personal gain, were endorsed by the President's advisors, treated as fact by portions of the media, and legitimized within the Halls of Congress.

And this was before the propaganda campaign about Plucky Little Ukraine began in earnest after the Russian invasion. The "Mary Poppins of Disinformation," indeed.

You can just call me the Mary Poppins of disinformation 💁🏻‍♀️ https://t.co/eGV9lpctYn pic.twitter.com/WVQFA2bPmq

Her other two "trends" involved mean Facebook groups that "affect our civil discourse and ability to compromise" and—naturally—the fact that "disinformation often targets women and minorities." Par for the course for a credentialed Democrat-establishment hack from the Wilson Center who endorsed the obviously phony "collusion dossier"—which I noted publicly from the jump had all the earmarks of a standard Russian false-flag operation, pointing the finger at itself in order to disguise the fact that they really were behind it; naked is the best disguise—and pooh-poohing the Hunter Biden laptop story as "Russian disinformation." This is the woman we want in charge of the repeal of the First Amendment?

It is no coincidence that this Frankenstein monster and its screeching harpy boss have sprung to life just days after Elon Musk made his successful bid for Twitter, with a promise to end its blatant censorship of conservative points of view [including mine; I've been banned for "targeted harassment" since the summer of 2020, apparently for illustrating the shortcomings of such journalistic apparatchiks as Chuck Todd, Yamiche Alcindor, and Nick Confessore, as well as the "presidential historian" Michael Beschloss], throttling free discourse, seizing private information and holding it hostage, and blaming their NKVD tactics on an "algorithm" developed by their "trust and safety" star chamber.

It also, purely coincidentally, comes directly in the wake of "former" president Barack Hussein Obama's speech at Stanford University endorsing more public censorship. Be sure to click on the video and listen to Barry, who unlike every other former president and in defiance of presidential custom, still lives in the District of Columbia, just a short drive from the White House:

Biden is just a front man. Obama, April 21: social media censors “don’t go far enough,” so the government needs to step in to do the job. Six days later, Homeland Security rolls out the 'Ministry of Truth' (aka Disinformation Governance Board). pic.twitter.com/CHOD4mbE0B

(DeSantis/Tulsi 2024. By the way, has anybody heard from Trump on this? Maybe he'll address it at his next supererogatory rally.)

Let us now remind ourselves of the late historian and Soviet scholar Robert Conquest's third law of politics: "The simplest way to explain the behavior of any bureaucratic organization is to assume that it is controlled by a cabal of its enemies." At this point in American history, that is not only a theory but a fact. Having narrowly "won" the 2020 election by stealing it fair and square, the Left is putting pedal to the metal to accomplish as much of its anti-foundational agenda as it can before the clock runs out on its tiny congressional majorities this fall. Wrote Molly Ball in Time Magazine in February 2021:

There was a conspiracy unfolding behind the scenes... an informal alliance between left-wing activists and business titans... The handshake between business and labor was just one component of a vast, cross-partisan campaign to protect the election–an extraordinary shadow effort dedicated not to winning the vote but to ensuring it would be free and fair, credible and uncorrupted. For more than a year, a loosely organized coalition of operatives scrambled to shore up America’s institutions as they came under simultaneous attack from a remorseless pandemic and an autocratically inclined President. Though much of this activity took place on the left, it was separate from the Biden campaign and crossed ideological lines, with crucial contributions by nonpartisan and conservative actors...

Their work touched every aspect of the election. They got states to change voting systems and laws and helped secure hundreds of millions in public and private funding. They fended off voter-suppression lawsuits, recruited armies of poll workers and got millions of people to vote by mail for the first time. They successfully pressured social media companies to take a harder line against disinformation and used data-driven strategies to fight viral smears. They executed national public-awareness campaigns that helped Americans understand how the vote count would unfold over days or weeks, preventing Trump’s conspiracy theories and false claims of victory from getting more traction. After Election Day, they monitored every pressure point to ensure that Trump could not overturn the result...

That’s why the participants want the secret history of the 2020 election told, even though it sounds like a paranoid fever dream–a well-funded cabal of powerful people, ranging across industries and ideologies, working together behind the scenes to influence perceptions, change rules and laws, steer media coverage and control the flow of information. They were not rigging the election; they were fortifying it. And they believe the public needs to understand the system’s fragility in order to ensure that democracy in America endures.

In other words, the Left had to "fortify" the election in order to save the Republic, thus allowing themselves the honor of hijacking it. Everything they've done since then, including the destruction of the American economy, the suppression of travel, the demolition of the Bill of Rights, the disruption of the supply chain, the looming food shortages, rampant inflation, and the outsourcing of American foreign policy to corrupt oligarchs, has been to further that objective. These are bad people, intent on doing you harm.

Hence the Ministry of Truth. Already, the lickspittle media are hastening to assure us that it's for our own protection, and will never be put to malign use. Why, here's Jack Shafer in Politico, telling us that Homeland Security is just too stupid to actually use the janky Jankowicz Bureau against us:

The idea that the Biden administration would pulp the First Amendment and institute an authoritarian regime through its agents at DHS is immediately dismissible if only because it is one of the most ineffectual departments in the president’s Cabinet. Had Biden given the task to Agriculture or Commerce or another department with a better GPA in governing, we should be afraid. But DHS couldn’t stamp out disinformation or erect an American Reich if we reallocated to it all of the arms we’re currently shipping to Ukraine. It’s peopled by a confederacy of dunces and botch-artists, incapable of carrying out its current mission.

Shades of "sloppy" Sandy Berger stealing documents from the National Archives, or of poor dumb Joe Biden, wrong on every major foreign policy decision and somehow always being re-elected—don't you feel better now? Stupidity and sloth will save us!

Or will it? As I wrote in the "Mephisto at the Ministry of Love" chapter in The Devil's Pleasure Palace, none of this is an accident, bad luck, or misjudgment. There is nothing well-meaning about what these people do, and never has been:

How quickly the leftist paradigm, like Mephistopheles molting from a poodle into his own diabolical self in Faust, shifts shape. In the Devil’s Pleasure Palace, though filled with writhing naked nuns and fleshly temptations of every kind, there is no room for fun. Its pleasures, like those of the Cenobites in the 1987 film Hellraiser, lie in the infliction of pain. The flesh that shall be torn is ours. Jesus wept.

This is why the Disinformation Governance Board must be stopped now. This is the hill to fight and, if necessary, die on. Because, to paraphrase Chris Walken's line from True Romance before he kills poor Dennis Hopper: this is as good as it's going to get, and it won't ever get that good again.