Public Enemy No. 1: Now It's Fracking, not Cows! 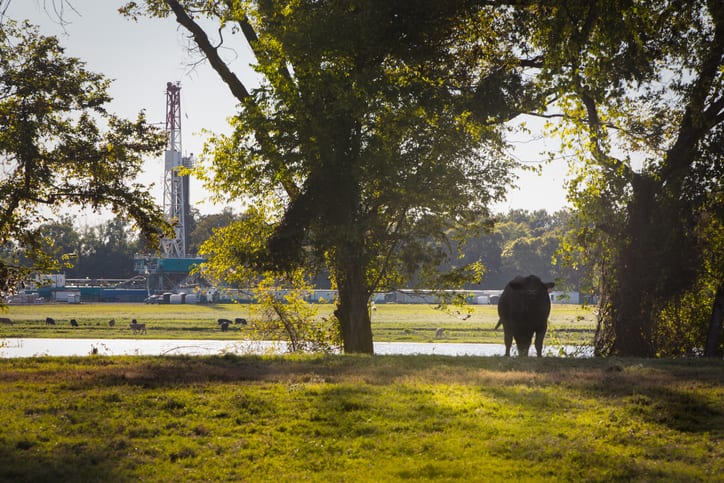 Bessie, you're off the hook

We interrupt our global hysteria about the Wuhan virus to bring you this public-service message, courtesy of The Nation:

Our leaders thought fracking would save our climate. They were wrong. Very wrong.

There’s one greenhouse gas everyone knows about: carbon dioxide, which is what you get when you burn fossil fuels. We talk about a “price on carbon” or argue about a carbon tax; our leaders boast about modest “carbon reductions.” But in the last few weeks, CO2’s nasty little brother has gotten some serious press. Meet methane, otherwise known as CH4.

In February, Harvard researchers published an explosive paper in Geophysical Research Letters. Using satellite data and ground observations, they concluded that the nation as a whole is leaking methane in massive quantities. Between 2002 and 2014, the data showed that US methane emissions increased by more than 30 percent, accounting for 30 to 60 percent of an enormous spike in methane in the entire planet’s atmosphere.

To the extent our leaders have cared about climate change, they’ve fixed on CO2. Partly as a result, coal-fired power plants have begun to close across the country. They’ve been replaced mostly with ones that burn natural gas, which is primarily composed of methane. Because burning natural gas releases significantly less carbon dioxide than burning coal, CO2 emissions have begun to trend slowly downward, allowing politicians to take a bow. But this new Harvard data, which comes on the heels of other aerial surveys showing big methane leakage, suggests that our new natural-gas infrastructure has been bleeding methane into the atmosphere in record quantities. And molecule for molecule, this unburned methane is much, much more efficient at trapping heat than carbon dioxide.

Well, as I like to say on Twitter, they never stop, they never sleep, they never quit. Just in time for fracking to have driven down the price of oil in one of the most environmentally friendly ways, putting the squeeze on the Saudis and other members of the Arab oil cartel, and dealing Vladimir Putin a blow in the shorts, we now learn (according to one of the most left-wing magazines in the country) that there's yet another problem gas associated with keeping our cars running and our houses warm: good old methane.

The EPA insisted this wasn’t happening, that methane was on the decline just like CO2. But it turns out, as some scientists have been insisting for years, the EPA was wrong. Really wrong... These leaks are big enough to wipe out a large share of the gains from the Obama administration’s work on climate change—all those closed coal mines and fuel-efficient cars. In fact, it’s even possible that America’s contribution to global warming increased during the Obama years. The methane story is utterly at odds with what we’ve been telling ourselves, not to mention what we’ve been telling the rest of the planet. It undercuts the promises we made at the climate talks in Paris. It’s a disaster—and one that seems set to spread.

As the saying goes, no one every went broke underestimating the intelligence of the American public. But here's the thing: this harum-scarum story is from 2016, during the Obama administration, when the former president promised us that we couldn't drill our way out of soaring energy costs. Well, we did -- but that hasn't stopped the propaganda drumbeat on the Left. In 2018, the website ThinkProgress hit the same theme, this time attributing the alarm to NASA (whose reliability on climate climes is, shall we say, highly suspect).

A new NASA study is one final nail in the coffin of the myth that natural gas is a climate solution, or a “bridge” from the dirtiest fossil fuels to low-carbon fuels like solar and wind. NASA found that most of the huge rise in global methane emissions in the past decade is in fact from the fossil fuel industry–and that this rise is “substantially larger” than previously thought. And that means natural gas is, as many earlier studies have found, not a climate solution.

A year later, the kiddie-news site Vox got into the act as well:

As greenhouse gases go, methane gets less attention than carbon dioxide, but it is a key contributor to climate change. Methane doesn’t stay in the atmosphere as long as CO2 and is reabsorbed into terrestrial cycles via chemical reactions within 12 years or so. But while it’s up there, it’s much more potent, trapping heat at roughly 84 times the rate of CO2. Scientists estimate that around 25 percent of current global warming traces to methane.

When it comes to reducing CO2 emissions, the chain between cause and effect is frustratingly long and diffuse. Reduced emissions today won’t show up as reduced climate impacts for decades.

But with methane, the chain of causation is much shorter and simpler. Reduced emissions have an almost immediate climate impact. It’s a short-term climate lever, and if the countries of the world are going to hold rising temperatures to the United Nations’ target of “well below” 2 degrees Celsius above the preindustrial baseline, they’re going to need all the short-term climate levers they can get.

Greenpeace and National Geographic have also piled on. There is some good news however, especially for beef lovers everywhere: fracking has now taken the onus off cow farts as the leading cause of methane gas in the atmosphere.

Fracking - not cows - is responsible for the big increase in atmospheric methane levels in the past decade, according to new Cornell University research published on Wednesday. The research, published in Biogeosciences, a journal of the European Geosciences Union, said atmospheric methane levels rose steadily during the last few decades of the 20th century before leveling off in first decade of the 21st century.

Atmospheric methane levels then increased dramatically from 2008-14, due to global human-caused methane emissions.

Previous studies erroneously concluded that biological sources - including animal agriculture, tropical wetlands and rice production - were the cause of the rising methane, according to the research paper's author, Dr Robert Howarth, the David R. Atkinson Professor of Ecology and Environmental Biology at Cornell University in the US.

What's the missing element in all these stories? Simply this: who cares whether fracking may cause the Henny-penny Left to miss its "climate goals" and its arbitrary insistence on a 2 degree Celsius upper limit? The real question should be: is the trade-off worth it? Don't cheaper energy prices compensate for some small, perhaps immeasurable, human contribution to "climate change"? Absent any evidence that the Apocalypse is right around the corner... so what?

That's the question the climate nuts can never answer.

One comment on “Public Enemy No. 1: Now It's Fracking, not Cows!”