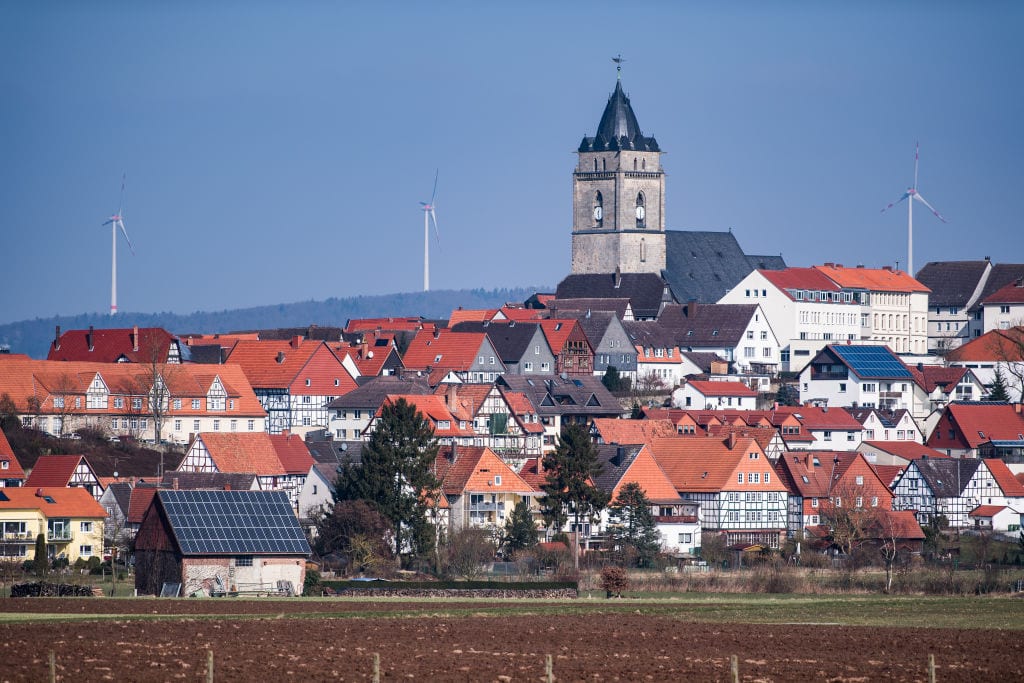 Grün in Wolfshagen, but Rot at the UN.

In his beautifully written essays, Conrad Black always shines a bright light on what otherwise might be neglected. His epistle on German energy policy is no exception.  In it he reviews the history of the environmental movement and how it formed a coalition with those who mistrusted economic growth. The left, he notes, realized the potential of this new means of achieving its ends after military conquest and revolution failed. They embraced the green movement to achieve what they could not otherwise:

The Left saw that the most effective method of obstructing capitalism was not through the revolutionary subversion of Western governments or developing countries (though some of that persisted, especially in Latin America), but in an ostensibly nonpolitical movement that assaulted capitalism under the cloak of saving the planet and making it a happy nature sanctuary.

Never mind that capitalism has greatly benefited the poorest in the world through its innovative genius and human incentives while Marxist governments give us hellholes like Venezuela and Zimbabwe.

“Over the last 25 years, more than a billion people have lifted themselves out of extreme poverty, and the global poverty rate is now lower than it has ever been in recorded history. This is one of the greatest human achievements of our time,” World Bank Group President Jim Yong Kim said. “But if we are going to end poverty by 2030, we need much more investment, particularly in building human capital, to help promote the inclusive growth it will take to reach the remaining poor. For their sake, we cannot fail.”

Because of political fragmentation, to stay in power German politicos have embraced green energy zealotry. In so doing Germany is impoverishing itself, shuttering nuclear and coal plants, increasing the (already dear) cost of electricity to consumers, and making itself ever more dependent on Russia and vulnerable to economic and political disruption. It has, in Black's words, “shut down its advanced and efficient nuclear energy program and is transforming itself into a state of thorough energy-dependence on President Putin’s threadbare Russia, chronically unreliable (apart from its rascality and duplicity).”

Lord Black suggests that people can focus on only one crisis at a time and that the Wuhan virus makes the Social Democrats' demand that the government must deal with that and “climate change” at the same time is insane. On this point, I think he’s more optimistic than I am. If Europe were on the stock exchange, I’d recommend shorting it. Here’s why I think he’s right on the genesis of this madness but he’s overly optimistic about its demise .

He’s right that the cost of dealing with Wuhan virus is high. It’s estimated that the cost of containing it will be as much as 7.2 and 20.6% of Gross Domestic Product, according to Germany’s emergency budget. This cost will come on top of the already astronomical costs to German consumers of the present energy policy. Relying on renewable energy has increased the cost of electricity substantially. German consumers are taxed to provide subsidies to solar and wind producers because these sources are by their very nature unreliable and because these facilities are so spread out, transmission lines from these distant sources must be built throughout the country. And it is predicted that these prices will increase indefinitely the more renewable sources are used.

But it will not be economically or politically easy to undo present actions and policies. Germany’s closure of its nuclear and coal powered plants continues as rapidly as the courts there will permit—the plan being to shut all nuclear power stations by 2022, Moreover Germany is well on the way to eliminating all 84 of its coal-fired plants.  The coal plants now provide about 40% of its electrical energy, the nuclear about 11%. Once shuttered, it will be costly if not impossible, to bring these sources back online. Japan is reopening shuttered nuclear plants, but the same “green” forces in Germany (and here) will certainly make such action politically difficult, although nuclear power is demonstrably the greenest source of electrical generation. German consumers may not realize that shuttering these plants has not reduced carbon emissions even as it increased their electricity costs, but to date the madness continues under pressure from the left and their “useful idiots.”

To my knowledge German consumers have not rebelled at the sharp increase (over 50% between 2006 and 2017) in electricity occasioned by the power production shift. And the madness is seeping over to France. Up until now, France has not followed the German energy lunacy. As a result French consumers pay a great deal less for electricity than do their German neighbors. France generates most of its electricity from nuclear and very little from solar and wind. Under German pressure that is changing; it should come as no surprise to those who pay attention that despite paying $33 billion for renewables between 2009 and 2018 “the carbon intensity of French electricity has increased.” In fact, per Mark Nelson and Madison Czerwinski, who seem to have most thoroughly investigated this, “France could have completely decarbonized its electricity sector had it spent $32 billion on new nuclear plants rather than solar and wind.”

One must conclude in light of rising consumer costs and increased reliance on renewables (even as they increase carbonization) that there must be another reason why governments keep ceding to green demands so counterproductive to their stated aims An obvious clue is to be found in the statement of UN Secretary General Antonio Guterres. While most of us see the spread of the Wuhan virus as a blot on the notion of globalization, the blinkered Guterres suggests it is a tribute to globalization and a call for further impoverishment of economies of the industrialized nations -- the very countries that create technological advances and provide aid to the world’s poor.

He obliquely acknowledges the economic contributions of the First World: “the G20 countries collectively account for more than 8o percent of global emissions and over 85 per cent of the global economy.” Yet he seeks to impoverish them—as Germany is impoverishing itself-- for an unattainable goal: “carbon neutrality by 2050.” Guterres contends, against all evidence, that societies will become more resilient the more they rely on sustainable energy rather than conventional sources. While most sentient observers notice that technological advancement and international aid requires capital for which capitalism and conventional power production are the best means to achieve it, he argues for less of it. Indeed, there is but a gossamer scrim hiding the real plan: redistribution from rich countries to poor, from tenable energy sources and producers to untenable ones. From democratic and functioning societies to proven failures. Following his screed it is impossible not to laugh at his concluding remarks, “Let us use the pandemic recovery to provide a foundation for a safe, healthy, inclusive and more resilient world for all people.”

In sum, his view must delight the Left, which has so far been unable to achieve its dual goals of smashing Western democracies and impoverishing all but those power mad and deceitful enough to arrogate power to themselves.