Dave Chappelle and the Death of Free Speech

You can say that again. Or maybe you can't.

Consider that somewhere in your city or town, in some cramped apartment or neighborhood coffee shop, there sits an aspiring young comedian pecking at a laptop or scribbling on a legal pad as he prepares the set he is soon to perform at a local comedy club. And as he pecks or scribbles, he looks over his five or ten minutes of material, moving bits up or down in the order in his desire to open and close with his strongest material. Then he reflects on one particular joke in the routine, one that when first written down he was certain would score with the audience but now must consider excising from the set. “Could this be the one,” he asks himself, “could this be the joke that gets me killed?”

In comedy’s long history, practitioners of the trade have been cloaked with what was once known as the “jester’s privilege,” a certain license that protected them from consequences when they made an observation that, from another’s lips, would have been viewed as transgressive. As should now be obvious to all, the jester’s privilege is dead. 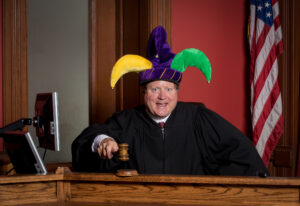 And dead, perhaps, is what Dave Chappelle might be had the man who attacked him at the Hollywood Bowl recently desired it. The alleged assailant, Isaiah Lee, 23, has pleaded not guilty to four charges: battery, possession of a weapon with intent to assault, unauthorized access to a stage during a performance, and commission of an act that delays an event or interferes with a performer. All of these charges are misdemeanors, carrying no greater sentence than a year in the county jail. Lee was originally arrested and booked on the felony charge of assault with a deadly weapon, but the district attorney’s office rejected the case and referred it to the city attorney for misdemeanor prosecution.

The D.A. in Los Angeles is George Gascón, with whom you may be familiar as a member of the crop of George Soros-funded “progressive” prosecutors lately installed here and there around the country, men and women devoted to “reforming” the criminal justice system. All available evidence suggests that wherever these so-called reforms have been instituted, increases in crime and disorder have followed, and Los Angeles is no exception.

Gascón is currently facing a recall campaign, and his refusal to file felony charges against Lee has stoked outrage among his detractors, whose number now includes podcaster Joe Rogan. Rogan took to Instagram to lament Gascón’s decision. “When you see that a person commits a clear crime,” says Rogan’s post, “and does it to one of the most loved performers alive, and does it in a very high profile public setting, and it gets captured on video, and you don’t charge that person for what they obviously did, it’s the kind of thing that makes people lose faith in law enforcement.”

Perhaps so, but loath as I am to defend Gascón, his rejection of felony charges in the Chappelle matter is entirely reasonable and indeed the only ethical choice. It may be true that Chappelle is, as Rogan describes him, one of the most beloved performers, and it is indisputably true that the Hollywood Bowl is a high-profile public setting, but neither of these factors weighs in the determination of the appropriate charge against Lee. He was arrested and booked under a charge of assault with a deadly weapon, but sober examination of the incident reveals his conduct did not match the elements of this crime under California law. 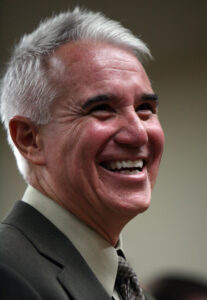 Gascon: why is this man laughing?

Yes, at the time Lee rushed the stage and assaulted Chappelle, he is said to have possessed a deadly weapon, to wit, a replica handgun built into which was a folding knife, but it was in a bag Lee carried and was never wielded at Chappelle or any of the men who pursued and subdued Lee backstage. Further, Chappelle was uninjured and continued his performance when the commotion settled. Not even the most aggressive, law-and-order prosecutor would file a felony charge given this set of facts.

Though Chappelle soldiered on and appeared unfazed, as his fans have come to expect, in his quiet moments since that day he surely must have wondered, as we all must have, what might have happened had Lee been more determined to cause him harm. Lee somehow carried his weapon through the Hollywood Bowl’s security measures, then to the foot of the stage and finally onto the stage itself. Lee easily could have inflicted a mortal wound on Chappelle with such a weapon. And consider that if a replica handgun passed through security with such apparent ease, what would have prevented Lee from bringing a real one?

Returning now to our aspiring comedian, what assurance does he have that one of his jokes will not ignite in some member of his audience a violent impulse similar to that which stirred within Isaiah Lee? If Dave Chappelle, with all his handlers and security team, can be attacked in front of 17,000 people at the Hollywood Bowl, what chance does an unknown have at the local comedy club should some lunatic try to take him out?

Dave Chappelle may well continue with his brand of comedy without the protection of the jester’s privilege, and in fact he seems to revel in the discomfiture he inspires in his critics. But those below him in the show business pecking order are likely to be far more circumspect in their choice of material. In recent years we have witnessed the homogenization of comedy, and indeed of most entertainment media, as jokes about or representations of various interest groups have been placed beyond the pale. Chappelle sparked outrage last year when he made sport of transgenderism in his Netflix special, “The Closer,” this despite the fact that the opinions he expressed on the matter are shared by at least 90 percent of Americans.

Today, it no longer matters how commonly held an opinion may be if it flies in the face of some dogma embraced by the radical left. If, for example, you express anything less than full-throated endorsement of the delusion that Rachel Levine is a woman, you may find yourself booted from social media, fired from your job, and now even physically assaulted, all with the blessing of the elites in media and academia.

So good for Netflix, which this week revised its house rules for snowflakes, a move no doubt occasioned by Chappelle's experience:

The document adds a new directive for employees to act with fiscal responsibility — a change that comes as Netflix in Q1 saw its first decline in subscribers in more than a decade. The updated Netflix Culture memo also includes a new section called “Artistic Expression,” explaining that the streamer will not “censor specific artists or voices” even if employees consider the content “harmful,” and bluntly states, “If you’d find it hard to support our content breadth, Netflix may not be the best place for you.”

The Artistic Expression portion of the Netflix Culture document appears in large part a response to the controversy over Dave Chappelle’s “The Closer” that embroiled Netflix last fall over what critics said were his transphobic and homophobic comments in the stand-up special. Co-CEO Ted Sarandos defended the company’s decision to keep the Chappelle special on the service, triggering a large employee walkout in protest.

Still, it now appears likely that our increasingly volatile country faces another summer of discontent, for if the leaked Dobbs opinion reflects the final Supreme Court holding and Roe v. Wade is overturned, the protests that will follow may well rival those engendered by the death of George Floyd in 2020. As on so many other issues, on the matter of abortion, our elites brook no dissent, not from you and me, not from Dave Chappelle, and not from some aspiring comedian grasping for just a fraction of Chappelle’s success.

One comment on “Dave Chappelle and the Death of Free Speech”