The Dawn of Man: we have seen the future and it works.

Remember the famous scene in 2001: A Space Odyssey when the monolith first appears? The proto-humans all gather round and practically worship the thing as a god. The same sort of thing is going on in Hawaii as we speak, except the monolith is one giant freaking battery and the worshippers are not ignorant apes, but enviro-nuts, which are pretty much the same thing now that I think about it.

The Kapolei Energy Storage (KES) project is being built on eight acres of land in Kapolei on the island of Oahu. When complete, the giant battery will be capable of storing up to 565 megawatt hours of electricity and dispatching up to 185 megawatts. In other words, it can put 185 megawatts onto the Hawaii grid for up to three hours.

By law, all electricity generated in the state of Hawaii is supposed to be produced using 100 percent renewable fuels by the year 2045. The island’s lone coal-fired power plant, with a rated capacity of 203 MW, is due to be forcibly retired next year. Plus Power, the company developing KES, says the battery will enable the grid to operate reliably once the coal plant goes down for good: “The 2022 completion of the KES project will ensure that the AES coal-fired plant will end operations, supporting the state’s goal of shifting from fossil fuels to 100 percent renewable energy generation.”

Average hourly demand in Hawaii is about 1,000 megawatts. That’s average demand, peak demand – which is what really matters when talking about grid stability – is considerably higher. But, for purposes of this analysis, we’ll use the average, which leads us to an important question: can a battery that can satisfy a little less than 20 percent of demand for a period of three hours replace a coal-fired power plant that has the capacity to satisfy 2- percent of demand more or less continuously?

The answer, which should be obvious to any high-school physics student, is no. A battery does not produce electricity, it’s just a place for electricity produced elsewhere to hang out for a while. In the case of the state of Hawaii, most of that electricity is, has been and will continue to be produced by burning oil. Roughly 65 to 70 percent of Hawaii’s electricity is generated by combustion of petroleum liquids according to data provided by the Energy Information Administration (EIA). 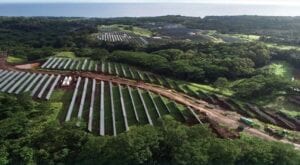 Capacity factor is a measure of how much electricity a power generation asset produces compared to what it theoretically can produce. If a plant is rated at 100 megawatts, but generates on average 40 megawatts, we say its capacity factor is forty per cent. Most nukes operate at capacity factors in the high nineties. Coal fired base-load plants are generally in the eighties, sometimes the low nineties.

Wind and solar have crappy factors because, even in Hawaii, the sun don’t always shine and the winds don’t always blow. Solar panels don’t have much to do at night and their efficiency drops significantly on cloudy days. Wind turbines can’t operate in calms or near-calms and, perversely, also have to shut down if the wind is too strong. 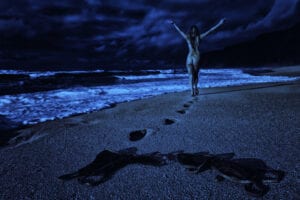 The Descent of Man: Feeling good about feeling good.

Again using EIA data, we find that last year the combined capacity factor for wind and solar was about 27%. So, while the total capacity of all renewable generation assets on Hawaii, 746 megawatts, sounds impressive compared to average daily demand, those assets will only generate about 200 megawatts on average. And when they are generating electricity it makes a whole lot more sense to pack it on the grid than sending it on a short vacation to the battery. The only time the battery will be charged using renewables is during those rare instances where there is a significant excess of renewable power. Most of the time, it’ll be charged up courtesy of fossil-fuel combustion.

Of course the battery will make a fine story for those who don’t understand how electricity works and allow eco-nuts to feel good about themselves. Will it do much of anything to help Hawaii meet its 100 per cent renewables mandate? Nope.