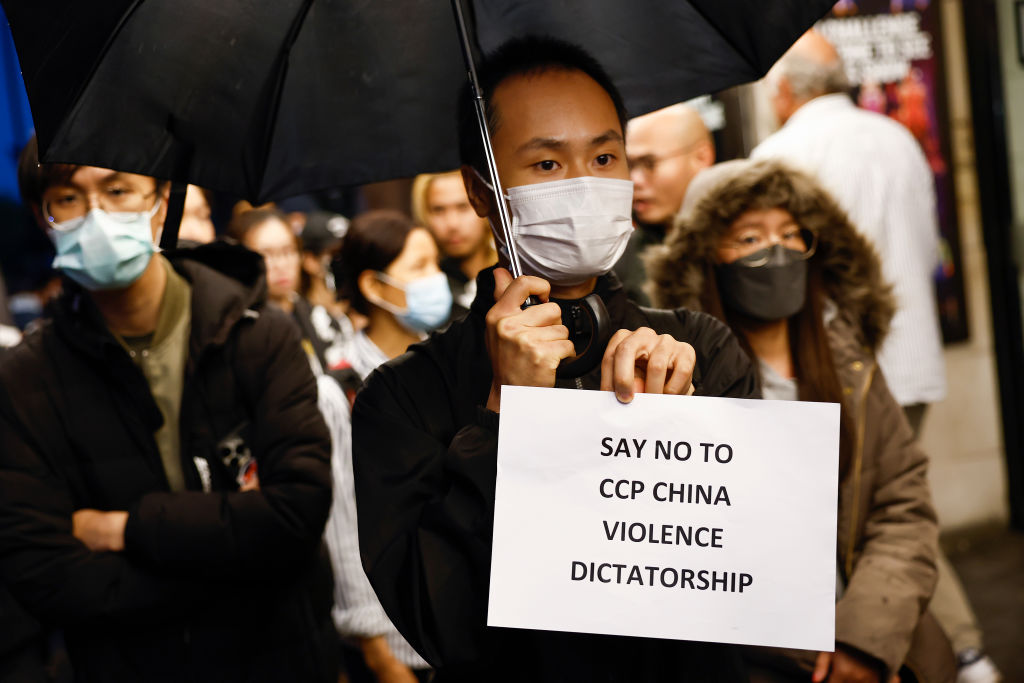 In a commencement address at Notre Dame in 1977, President Jimmy Carter observed that "democracy's great recent successes—in India, Portugal, Spain, Greece—show that our confidence in this system is not misplaced. Being confident of our own future, we are now free of that inordinate fear of communism which once led us to embrace any dictator who joined us in that fear." Carter was widely criticized on the right for implying that communism was not the existential danger conservatives thought it was, but it was clear from the rest of the sentence that he was instead criticizing America's enemy-of-my-enemy-is-my-friend strategy that had led us into bed with some distinctly unsavory characters, among them the Shah of Iran. Carter went on:

For too many years, we've been willing to adopt the flawed and erroneous principles and tactics of our adversaries, sometimes abandoning our own values for theirs. We've fought fire with fire, never thinking that fire is better quenched with water. This approach failed, with Vietnam the best example of its intellectual and moral poverty. But through failure we have now found our way back to our own principles and values, and we have regained our lost confidence.

That "lost confidence" quickly vanished when less than a year later the Ayatollah Khomeini appeared on the scene and by January of 1979 had driven the Shah from power, leading to the establishment of the "Islamic Republic" and ultimately to the hostage crisis that destroyed the Carter presidency and to Ronald Reagan's smashing victories in 1980 and 1984 and thus the fall of the Soviet Union. Moral: do not project your own domestic virtues and expectations onto men from other countries and other cultures, a critical variation on the time-honored principle of never underestimating your enemy by overestimating his fundamental sympathies with you regarding such malleable concepts as "human rights."

Which brings us to China: the Mysterious East, beloved by Hollywood and once an exotic fixture of the American imagination, brimming with sinister orientals, foreign adventurers, Sikhs and sheiks, and Mother Goddam herself in a 1926 play and 1941 movie directed by Josef von Sternberg. It's Not Like Us, never has been, never will be:

The Peoples Republic of China is a slave state boasting a record of military ineptitude unrivaled by any other large nation on earth, and is entirely of a piece of nearly all Chinese governments that have come before it. It has no affinity with the West, nor does it desire one. Almost congenitally incapable of creativity, innovation and exploration, it has instead adopted financial colonization as a central instrument of its foreign policy, using its own people as pawns in an international chess game only one side is playing. Today, having scorned them as an undifferentiated mass of coolies led by a handful of mandarins, we fear them, but for all the wrong reasons.

As I've often observed, based on the historical record, the only people the Chinese can defeat in combat are themselves, as the stupefyingly high body counts of the Taiping Rebellion and Mao's civil war attest. The British easily conquered China during the Opium Wars, and in the runup to Pearl Harbor, tiny but ferocious Japan whipped them twice, in 1931 and again in 1937—not to mention Japan's victory in the First Sino-Japanese War at the end of the 19th century. In 1979, the Vietnamese gave the Peoples Liberation Army all it could handle, repelling its invasion during the Sino-Vietnam War.

Indeed, China's futility in combat with outsiders dates back as far as the Battle of Talas in 751 A.D., when the Abbasid Muslims and some Tibetan allies crushed the armies of the Tang Dynasty, halting Chinese westward expansion into central Asia. Nor could the Chinese stop the Mongol Conquest of the 13th century, nor the incursions by the Turkic Muslim Timur (Tamerlane) of the 14th. At the head of the Ever-Victorious Army in 1863, General George Gordon (who later died defending Khartoum against the Mahdi in 1885), led his peasant army defending Shanghai armed with little more than a swagger stick; they won. On the field of battle, big China is very much Little China.

One of China's principal cities, Shanghai, was for a long time under foreign occupation, a wide-open international city with British, French, and American residential and administrative zones; during World War II, Shanghai also had a Jewish ghetto, established for European Jewish refugees fleeing both Hitler and Stalin by the Japanese in a Chinese part of the city at the behest of their National Socialist German allies. (Among the famous "Shanghai Jews" born there are Harvard professor Laurence Tribe, Hollywood producer Mike Medavoy, and concert pianist Misha Dichter.)

Which is to say, America's inordinate fear of the Chinese does not arise from any evidence they can actually fight, in the way the Japanese, Germans, and Russians could. Even today, with their massive army and plastic navy rattling the sabers of stolen (and, as they might well find out, booby-trapped) martial technology confronting a woke American military establishment more concerned with "critical race theory" and the affirmative promotion of risible transsexuals to high rank, China does not pose an existential military threat. Instead, it comes from their hand-me-down Marxism-Leninism—even their failed system of government has been hijacked from the West—has risen in direct proportion to our cozying up to them economically. And why not? If they treat their own people like slaves, why shouldn't Apple and other rapacious and immoral international corporations employ them to make the iPhones that will hang us?

In other words, China has not become a major player on the international stage by military means, but by traditional culture methods of often-unscrupulous economy savvy, effective use of bribery, and a massive diaspora that has seen Chinese communities established all over the world, including Malaysia, Singapore, India, Indonesia (where they made themselves so unwelcome that there widespread anti-Chiinese riots in 1998) and, latterly, in Africa and South America. Fear of Chinese soft power was so strongly entrenched in the United States after thousands of Chinese arrived to work on the railroads that Congress passed the Chinese Exclusion Act in 1882, which began a general tightening of immigration that lasted until the Hart-Celler Act of 1965.

Ever since the hapless Carter dumped the losing side in the most recent Chinese civil war and recognized the "Peoples Republic," China has employed its only weapon—people—as a weapon against the West and in particular against the United States. It floods the country with spies called "students," it bribes politicians and academics and then hides behind the usual cries of "racism." It obviously has suborned and corrupted the current president of the United States and members of his contemptible family even as Biden tells Americans "they're not bad folks, folks,"

Perhaps, like Carter, Biden is temporarily right for the wrong reasons regarding the Chinese threat. At the moment, China is rapidly descending into chaos—in a fine bit of dramatic irony if not actual karma, entirely owing to its own maleficent role in the creation and weaponization of Covid-19, which has resulted in totalitarian lockdowns, civic violence, and now calls for the head of dictator-for-life Xi Jinping. Whether Xi, like Julius Caesar before him, has taken a step too far and will soon be decisively deposed, remains a matter of conjecture in a land once routinely referred to as "inscrutable." But if history tells us anything, it's that China's appetite for internal bloodletting is far greater than its desire for world conquest; all we really need to do is sit back and let nature take its course.

In the end, it's still a place of obscure motives, intense tribal relationships, alien customs, and ways that are not our ways. A place that relies on the sloth and greed of others to hook them on cheap plastic electronics and third-rate steel and concrete as they willingly hollow out their own industries and junk their national pride to make a buck. It's Chinatown.

14 comments on “THE COLUMN: Big Trouble in Little China”