Late last month during a multi-day interview with a Chinese virologist and researcher who is in hiding in the U.S, I had a revelation about how the largest institutional banks feign having principles, while they avoid actually being principled. While the country is being beaten about the head with a counter-factual accusation that the two greatest threats to America are systemic racism and climate change, there exist actual geo-political and economic threats that require real leadership and genuine principle.

I had driven to the secure location to meet the doctor and followed extensive protocols to ensure her safety. What Dr. Li-meng Yan reveals about the Chinese Communist Party and the Chinese military’s malevolent misdeeds surrounding the release of the SARS CoV-2 virus left me pondering how reason has been replaced by such rhetoric.

COVID-19 is an "unrestricted bioweapon" that slipped from a Wuhan facility. This claim was according to a Chinese virologist who fled to the United States after claiming that China covered up the coronavirus epidemic. Dr. Li Meng-Yan, a whistleblower, claims that a trove of Dr. Anthony Fauci's emails backs up her assertions. In an interview with Newsmax, the Chinese whistleblower said she had emailed Dr. Anthony Fauci about her theory and "discovery."

The messages - obtained through the Freedom of Information Act - implied that the White House virus expert knows the possibility of the virus being manufactured. However, The Sun claimed Fauci downplayed it publicly.

Dr. Li said that Fauci's emails revealed on Tuesday by Buzzfeed and the Washington Post show he knew about the Chinese tinkering with viruses to make them more lethal. "Frankly, there is a lot of useful information there [Fauci's emails]," she said in The Sun's report. "He knows all these things," she insisted of Fauci in a New York Post report. 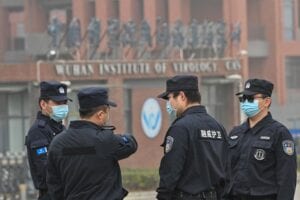 So how has "climate change" superseded Covid-19 as an existential crisis, as Larry Fink, CEO of BlackRock, in his annual ‘letter to CEOs’, thinks it has? China’s continued cunning and sinister shenanigans, in all their variations, have been conspicuously overlooked; instead of identifying the Chinese Communist Party, and all its many tentacles, as the greatest existential threat of our time, Fink posits a counter-factual. China after all makes money for BlackRock  through investments. Having actual corporate values guided by principle does not.

Dr. Yan, a medical doctor and published researcher who specializes in immunology and vaccine development, and is an independent coronavirus expert, was forced to flee Hong Kong last year because she declared that the SARS CoV-2 virus had been engineered in a lab and that it indeed had gain-of-function characteristics -- in other words, it was weaponized expressly to increase virulence in humans. While  more will be forthcoming in the weeks ahead about Dr. Yan’s knowledge of these events, it is clear that Larry Fink may need to spend a bit more time using the BlackRock’s annual RAND Corporation subscription. In his letter to CEO’s he writes,

I believe that the pandemic has presented such an existential crisis – such a stark reminder of our fragility – that it has driven us to confront the global threat of climate change more forcefully and to consider how, like the pandemic, it will alter our lives. It has reminded us how the biggest crises, whether medical or environmental, demand a global and ambitious response.

In the past year, people have seen the mounting physical toll of climate change in fires, droughts, flooding and hurricanes. They have begun to see the direct financial impact as energy companies take billions in climate-related write-downs on stranded assets and regulators focus on climate risk in the global financial system. They are also increasingly focused on the significant economic opportunity that the transition will create, as well as how to execute it in a just and fair manner. No issue ranks higher than climate change on our clients’ lists of priorities. They ask us about it nearly every day.

How Fink jumped from a pandemic to climate change being a global threat while overlooking China as the global threat that demands a global and ambitious response, requires the flexibility of a Shabari submissive.

By contrast, in the skinny jean-wearing world Fink envisions, the economic vitality fueled by the oil and gas industry is blunted, and only a few are permitted to economically benefit. Every aspect of life in this brave new "Great Reset" world becomes more expensive, more confiscatory, and more Socialist if the climate change narrative is left unrebutted. Enter China.

China’s record of environmental degradation and abuse is well known and well documented. With 1.4 billion people, many living in utter poverty, a manufacturing sector whose carbon emissions are suffocating, and largely unregulated, and a Party that controls society via a digital surveillance state the Chinese people refer to as the "Great Wall," China is the actual existential global threat, not the climate change bogey man. 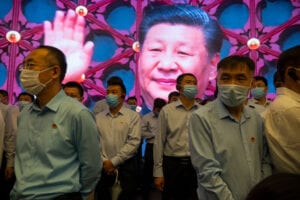 Tomorrow belongs to us.

Since 2012 when Xi Jinping began his tenure as party General Secretary (he became President the following year), more than 2 million Uyghurs have been sent to Mao-style "re-education" camps. At these camps, estimated to number more than thousand, Muslim Uyghurs have been abused, tortured, sexually assaulted, forcibly sterilized, and even killed. But climate change is the real threat?

Beyond environmental degradation, human rights abuses and corruption, the Chinese practice censorship with the help of tech companies, manipulate currency markets, steal intellectual property, have militarized artificial islands in the South China Sea, and most recently, according to Dr. Yan, have used unrestricted novel bioweapons, intended to harm people and to arrest economic activity around the world in their stated pursuit of world dominance by 2035. But institutional racism and climate change are the problem?