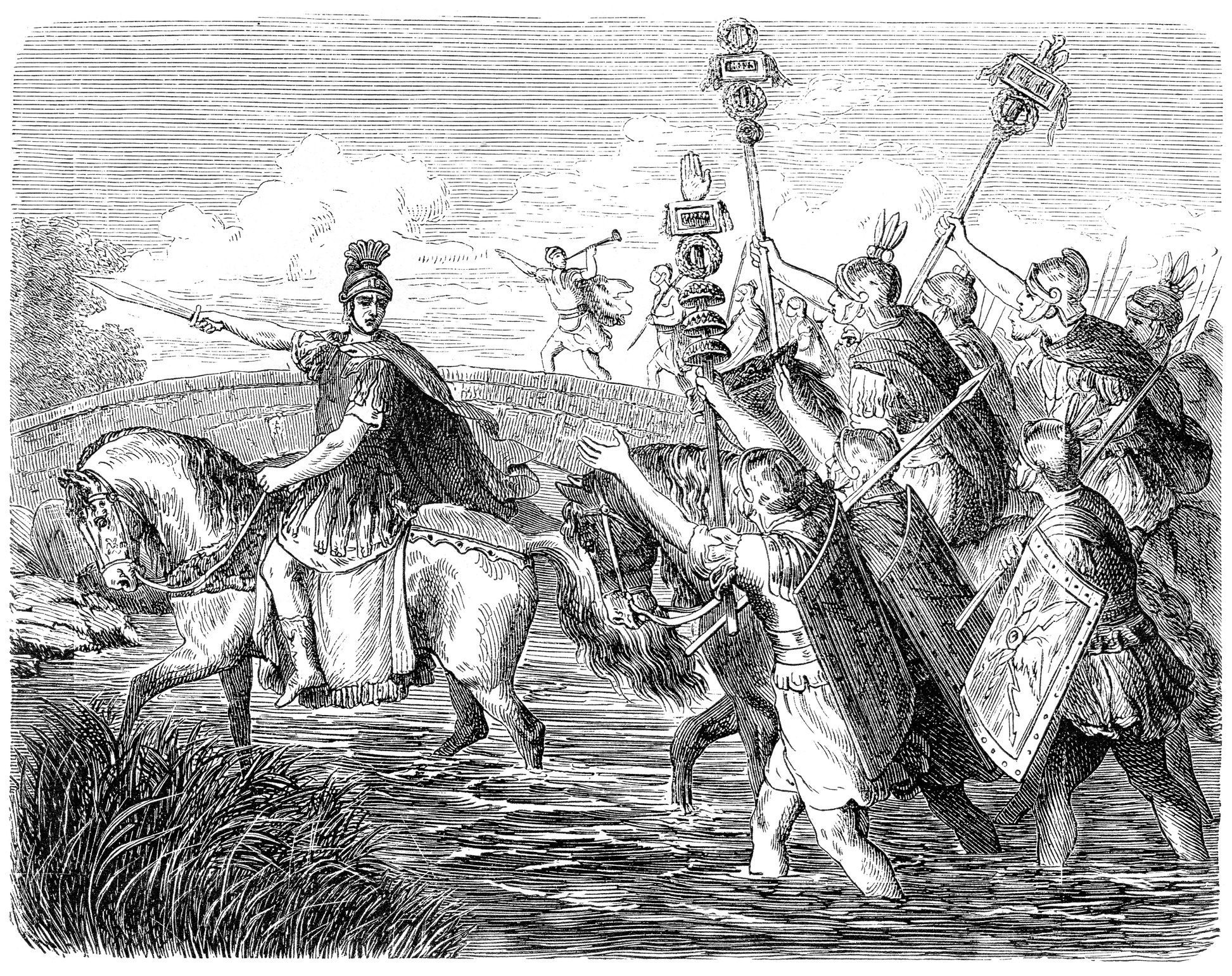 Biden, Garland, and the Democrats cross the Rubicon.

In early 49 B.C., fresh from his conquest of Gaul, Julius Caesar and his Thirteenth Legion approached a small river that separated the Roman province of Cisalpine Gaul from the Roman Republic's heartland. This stream, called the Rubicon, marked the political boundary of Rome's military might: no Roman general could bring men under arms into Italy. But Caesar, politically ambitious, was under threat. His eight-year campaign in Gaul had been deemed illegal by many in the Senate and there were calls for his head.

Further, one of his fellow members of the First Triumvirate, Crassus, had  been killed in a foolish, vanity fueled misadventure against the Parthians at Carrhae in 53 B.C., while Caesar's alliance with his  other triumvir, Pompey, had been shattered irreparably when his daughter Julia, Pompey's wife, had died in childbirth the year before. Although he was a hero to the people of Rome, Caesar knew his enemies in the Senate, led by Cicero, were plotting his downfall. What to do?

The only solution was to march on Rome and fight for power. Alea iacta est, he was supposed to have said as he led his troops across the muddy stream: "the die is cast." Thus began the civil war that destroyed the Republic and led to Caesar's own assassination in 44 B.C., paving the way for the rise of his grand-nephew, Octavius, to become Augustus, Rome's first emperor (he called himself, modestly, Princeps, or First Citizen), and thus establish the Roman Empire. Ever since, to "cross the Rubicon" has come to mean taking an irrevocable step, a daring gamble either to win or lose with the highest stakes depending on one throw of the dice. 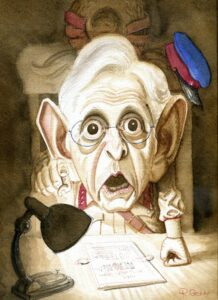 Show me the man and I'll show you the crime.

With the raid on former president Donald Trump's private residence at Mar-a-Lago in Florida last week, that's exactly what the Democrats have done.

The Democrats, a criminal organization masquerading as a political party, love to boast about their "firsts," and they are indeed impressive. Aaron Burr, effectively the party's first vice president, rose to political prominence via his control of Tammany Hall, the gold standard of American political corruption. He shot and killed Alexander Hamilton, one of the Founding Fathers, and was later involved in a trial for treason, but of course skated, as Democrats are wont to do under our system of "justice."

A mere half a century later, Democrats had become the full-throated party of slavery. After their loss in the presidential election of 1860 to the new Republican Party under Abraham Lincoln, they reacted with typical class by declaring Lincoln an illegitimate president, seceding from the Union, and firing the first shots of the American Civil War at Fort Sumter in 1861. In the 1864 election campaign, in which the Confederate states did not take part, the remaining "peace" or "Copperhead"  Democrats ran one of Lincoln's own, failed generals (George McClellan) against him. And when that failed, they assassinated Lincoln a week after Lee surrendered to Grant at Appomattox.

That's quite a record, and yet today's Democrats seem hell-bound to top it. Under the demented, corrupt hulk of non compos mentis called Joe Biden, they've destroyed the booming Trump economy, humiliated their own country with the summary abandonment of the Afghanistan war, turned loose the nation's criminals on a legally defenseless population, let loose the dogs of debt, inflation and commodity scarcity, blown up the supply chain, solidified the power of the Praetorian Deep State, weaponized the intelligence community and the FBI in the service of the Party, terrified the gullible via their reprehensible Covid scare tactics, crippled the domestic energy industry, injected the poison of Critical Theory into the national bloodstream, and castrated much of the Bill of Rights, including the first, second, fourth, fifth, ninth, and tenth amendments. As soon as they can figure out a way to quarter soldiers in your homes and apartments, you can bet they will. 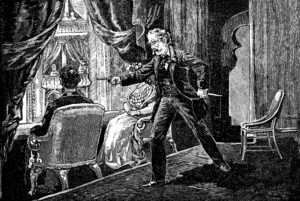 For "our democracy," by any means necessary.

Now in the vengeful attorney general Merrick Garland—whose nomination to the Supreme Court by Barack Obama luckily died in the Senate in 2017 with the arrival of the Trump administration— we have the second coming of Lavrentiy Beria, the head of the secret police under Josef Stalin in the country Democrats long most admired, Soviet Russia. (They've since transferred their affections to Communist China.) Never before in the history of our Republic—a phrase conservatives ought to be using as a counterweight to the Democrats' deceitful "our democracy"—has the nation's chief legal officer ordered an armed raid on a former president, in this case on Biden's immediate predecessor and the leading contender for the GOP nomination in 2024.

It's step of breathtaking audacity, but hardly surprising. Not for nothing is the Democrats' unofficial motto "by any means necessary." Since the days of Burr and Jefferson Davis and John Wilkes Booth, violence has always lurked just below the surface of their "higher" patriotism. Indeed, as the Sixties exemplified, it's part of their appeal. "The worst are full of passionate intensity," wrote William Butler Years in his widely quoted poem, The Second Coming, written in 1919. "Surely, the Second Coming is at hand."

A century on, it's still an apt image. The contemporary America Left, a strange hybrid of Protestant evangelism and Marxist atheist millenarianism, is fueled by the red-diaper-babyism that is the Frankfurt School's primary contribution to the realm of American arts, letters, philosophy, and mores. They're getting old now (Biden is 79, Garland is 69), and time is running out. Eternally marching under the banner of "progress" to a Promised Land that doesn't exist and will never arrive, the Left is in the midst of a long-planned (see Marcuse, Herbert, et al.) and daringly executed assault on the foundations of the United States, which latterly includes even a frontal attack on the Constitution itself. They were perfectly happy to enjoy the protections of that document when they needed them, but now that they don't, the hell with it.

The key to understand the Left, pretty much from Rousseau on, is that they believe in an "arc of history," which amazingly bends toward their preferred transient policy prescriptions in the here and now. It's a kind of misplaced messianism, with an imminent savior ready to descend to earth to establish a new kingdom of heaven, one in which they will witness the destruction of their enemies, and over which they will rule for ever and ever, amen. "The country is on fire," Trump reportedly wrote to Garland in a message sent after the raid. "What can I do to reduce the heat?" 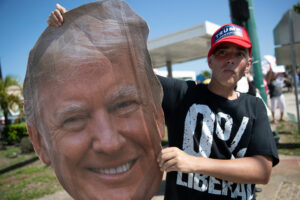 Agog at Gog and Magog.

The answer, of course, is: nothing. Their belief in the righteousness of their destructive cause is practically biblical, as is their hatred for the Gog and Magog of this story, Donald Trump, his benighted supporters, and his MAGA country, who stand in the way of Progress and therefore must be liquidated. Trump's surprise election in 2016 caught them with their pants comfortably down around their ankles, Clinton-style, but they instantly mounted a counter-counter-revolution via the "Russian collusion" hoax, the Ukrainian impeachment fracas, and their nimble corruption of the January 6 protests in the aftermath of the "fortified" Biden election. And yet they know their fingernail-hold on power can all disappear this fall, and the specter of an enraged Trumpzilla returning to stomp them into matchsticks in 2024 absolutely terrifies them. As it should.

Like Caesar, they're playing for keeps now. Either they complete their overthrow of the Republic or, in Ben Franklin's memorable phrase, they'll all hang together. The die is cast: "by any means necessary"? You ain't seen nothing yet.