Some Non-Negotiable Demands for Utopia 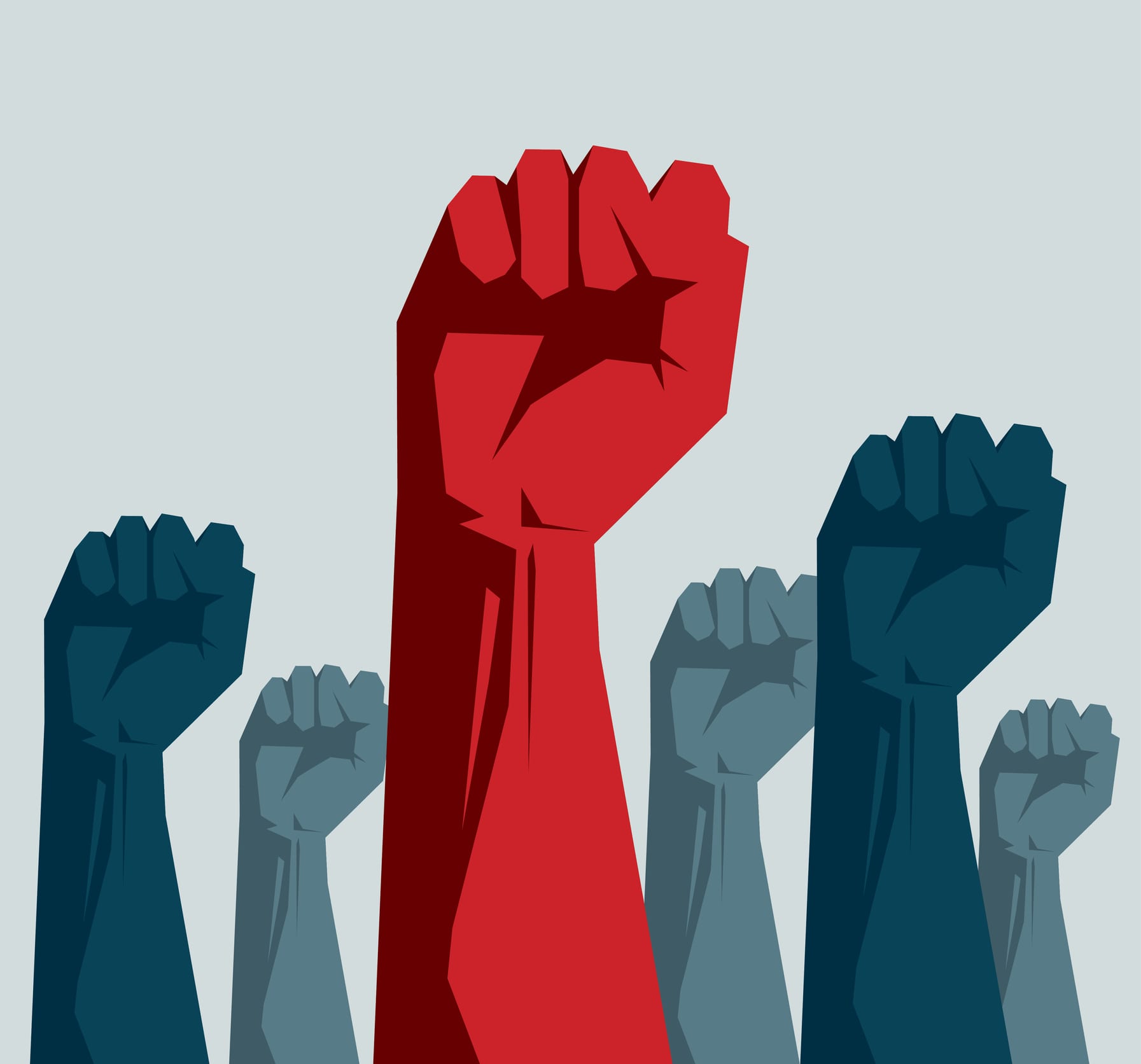 Whiners of the World, Unite!

Just when you’ve started wondering what topic you should write a column about—an activity that mostly leads to hours of more wondering—a lightning bolt strikes and clarifies your duty. On this occasion the lightning bolt took the friendly form of a left-wing petition urging me to save the world, more or less, by signing a petition making certain demands on . . . well . . . the world.

It’s easy to mock such things, and I shall try to do once or twice here, but the idea of petitioning parliaments, congresses, and governments is an ancient, honorable, and essentially democratic one. As a mode of debate it’s greatly to be preferred to hitting the heads of people with whom you disagree with mallets. And it has sometimes brought about peaceful democratic change—notably in the case of the People’s Charter of 1838 which brought millions onto the streets, made the ruling classes nervous, and persuaded Parliament to introduce most of the essentials of the country’s modern democracy over time.

The petition sent to me was somewhat more ambitious. It was addressed flatteringly to “policy makers” and it bore the grandiose title Covid-19 Global Solidarity Manifesto. It is well-designed, having that look of authentic simplicity that disarms skepticism, and it is indeed short, simple and declarative. Its nine main points begin with the words, “We demand . . .” 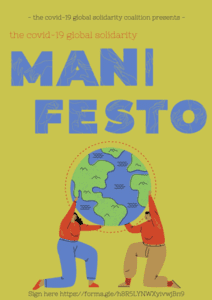 What’s being demanded we’ll come onto in due course, but the petition varies its demands with assurances that these things are going to happen anyway. Oh yes. This kind of writing is known as the “imperative indicative,” but it’s less imperative than they might wish because the element of threat is so understated. Reading it is rather like being held up by a man wearing a Covid-19 health mask and wielding a banana.

Let’s now come to the content—the weak spot here as in so many left-wing manifestos. The first demand is for “strong, universal health care systems and health care as a basic right for all humans.” Such things would certainly be desirable outcomes, but they cannot be granted as rights because they are unattainable in present circumstances and would impose insupportable burdens on everyone everywhere including those countries which currently have good health systems.

Consider this: even in progressive health care systems in rich countries there’s a constant irresolvable struggle to combine three things: universal access, the full range of (ever-expanding) medical treatments, and cost control. Pick any two. The attempt to have all three results in regular crises in which queues for particular treatments lengthen and expensive treatments cease to be available at all.

That discomfiting reality rests on the truth that the demand for health care is potentially infinite. As the former UK health minister, Enoch Powell, wrote in a 1960s book (I quote from memory): Unrestrained by price, the demand for health care rises until it consumes the entire national income. When I quoted that to a distinguished doctor of firmly liberal views on the faculty of Stanford University, he told me that he hated to agree but that he was reluctantly bound to do so.

The end result of Demand #1, therefore, would be the universalization of health poverty as the fruit of an attempt to equalize health care upwards. So Demand #2—a massive reduction in war, conflict, and defense spending—would fail as well since half of its purpose is to pay for Demand #1 and some of the other causes listed (“housing, childcare, nutrition, education, Internet access, and other social needs.”)

There is only one way the world could afford to pay for this catalogue of costly benefits and that is if we were able to achieve a fantasy of high economic growth without end. Unfortunately, that prospect is scotched by Demand #3 which calls for “the fantasy of endless growth” in unsustainable capitalist economies, “[to] be replaced with cooperatively based economies of care, where human life, biodiversity, and our natural resources are conserved and a universal basic income is guaranteed so that governments can work together to combat the existential threat of climate change.”

And here we come to the nub or gist of the problem. In a way, the petitioners are pointing to something important which they misunderstand: endless growth under capitalism is not a fantasy but the experience of capitalism over more than two hundred years. Such growth has proved to be a fantasy, however, under all other economic systems, notably those “cooperatively based economies of care” which provide their citizens with economic security, but which also restrict them to much lower living standards than their capitalist neighbors. Such economies have delivered economic wastelands despite being given a series of Western loans and investments over the years.

Moreover, the various kinds of communist/socialist economies in the last century that attempted a (more realistic) version of this program did not handicap themselves by swearing off cheap fossil-fuel based energy as the main mover of industrialization and prosperity. Quite the contrary. Lenin defined communism as “Soviet power plus electrification,” and unlike some modern environmentalists, he didn’t think that electricity grew on trees (not without the trees being chopped down, converted to wood chips and then transported thousands of miles to power stations across the world.)

But the signatories of the Covid-19 Global Manifesto want to deliver all the benefits above, including a program of universal income grants, without using cheap fossil fuel energy that underpins prosperity worldwide. Their “fantasies” of electrification provided entirely from renewables like wind and sun were recently diagnosed into oblivion by Professor Michael Kelly of Cambridge University in his monograph Electrifying the UK, in which he cites, with examples, the costs of engineering the delivery of energy—even in the cases where its generation is relatively cheap. They turn out to be enormously expensive.

It is often pointed out that electric motors are more efficient than internal combustion engines, and this is true; there is a factor of three involved. But the low energy density of batteries means that much of this advantage is lost in having to carry around a heavy battery. The power pack for a Tesla weighs half a tonne and occupies much of the floor pan of the car: for the same 600-km range in a petrol car, you would need 48 litres of petrol, weighing just 36 kg.

The £45 million battery installed by Elon Musk outside Adelaide, South Australia, can power that city for 30 minutes. It would power the emergency wards (20% of total demand) of Addenbrooke‘s Hospital in Cambridge for 24 hours on a single 80–20% discharge. Back-up is currently provided by two 1500- kVA diesel generators, which run for as long as fuel is available and cost £250,000. So if you wanted to be able to cover a 3 week’s power outage after a major storm, it would cost around 1300 times as much using batteries as it would with diesel generators.

I'm not over-confident that you can simply multiply that cost by the number of hours in a day and days in a year to get an accurate estimate of what it would cost to power Adelaide for a year, but if so, the cost would be upwards of a trillion dollars. And there are similar mind-boggling cost overruns attached to almost every Green technical insight. I doubt Adelaide’s city fathers would think that a practicable proposition. Nor would the government of South Australia, nor the Australian federal government in Canberra. Nor other governments not headed, however temporarily, by visionary idealists.

That may not matter a great deal to the authors of the Global Solidarity Manifesto.  Consider the organizations that so far have signed up to the manifesto. Here was the list as of yesterday:

My guess is that unlike the  Chartists of 1838, these bodies are looking to present their reforms to organizations representing the whole of mankind rather than to narrow nationalist democratic governments that have to pay for their policies by taxing their citizens and justifying expenditures to the voters in elections. Insofar as they seek to change the policies of national governments, they do so by  influencing UN and other globalist bodies which then lean on governments to follow them in ways that Hudson Institute scholar John Fonte has called a fantasia of “global governance.”

In other words, it’s the stage army of transnational progressives mounting another membership drive. They have little or no genuine  democratic credentials, and they frequently proclaim that their favored concerns are "too important to be left to democracy—which is all the more reason for the rest of us to apply democratic criteria to their manifestos.

There are about nine billion people in the world. Yesterday the Covid-19 Global Solidarity Manifesto had 1600 signatures. When the figure reaches five billion, call my office.

6 comments on “Some Non-Negotiable Demands for Utopia”