'You Love to See It': Negative Oil Prices and AOC 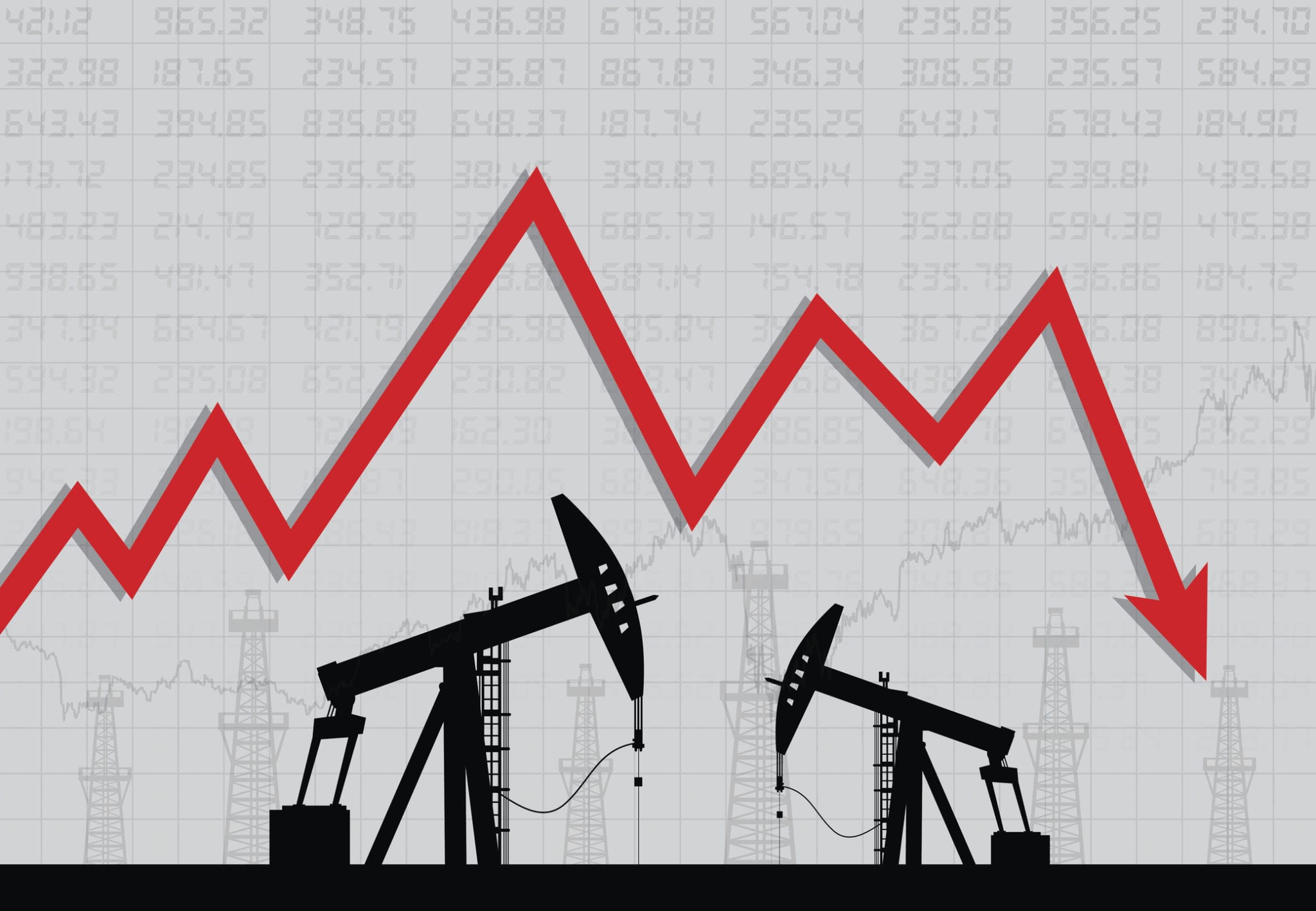 If you were following the oil market yesterday, you got to see something historic. West Texas Intermediate oil absolutely collapsed. Never before have oil futures traded in negative values, but yesterday they went all the way down to -$40 per barrel. Which means that,  theoretically, the traders who hold the contracts on that oil would pay you $40 to take it off their hands.

The collapse occurred because May contracts expire today and thus cannot be actively traded, but whoever is left holding those contracts has to actually take delivery at the end of the month. This is a problem because commodities traders don't ever actually take delivery of anything. They need crude oil refineries or storage facilities to purchase that oil from them. The problem with that, of course, is two-fold: one part supply, one part demand.

On the supply side, the Saudi/Russia oil war which began in early March and ended in a tentative agreement brokered by President Trump last week (which doesn't actually take effect until May), has led to a glut of oil, filling inventories, depressing prices, and leading refineries to cut production. Meanwhile, the coronavirus lockdowns around the world, by decreasing driving, flying, and other common uses of oil, have destroyed demand. Which is to say, oil prices didn't have far to fall before they went negative, and their passing zero was assured by the fact that a) no one is using oil and, b) we are running out of capacity to store unrefined crude.

What does all of this mean? Well, a lot of things, but one of them is that oil producers are going to start drastically cutting production and, consequently, laying off workers. From the Wall Street Journal's report:

U.S. oil companies including Chevron Corp. and ConocoPhillips have said they would reduce output. But traders say the industry isn’t moving fast enough to alleviate the selloff. This week’s price moves will be a huge wake-up call for complacent oil-company chiefs, said Edward Marshall, a commodities trader at Global Risk Management. “If they do nothing and sit there like rabbits in the headlights waiting to be hit by a car, they’ll be hit,” he said. “I wouldn’t be surprised to see even more capex cuts…even more layoffs, even more jawboning by OPEC."

Which is terrible news, considering the massive spike in unemployment since the beginning of this crisis. The men and women who lose their jobs because of this will add to that number, but they will also be significantly less likely to find new employment in the near future. For some, however, this is apparently cause for celebration: 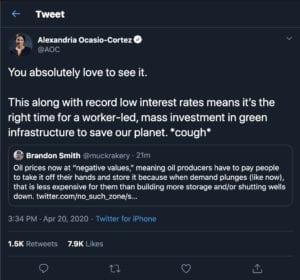 You'd think that a self-described socialist would be slightly ashamed to begin her response saying "You absolutely love to see" an event that will lead to so many people losing their jobs. But then again, socialist solidarity with workers has always been propaganda in the service of power -- which is exactly what this is. For Rep. Ocasio-Cortez, a serious destabilization of the market is just an opportunity to enact her pet legislation, and that would, in point of fact, make sure the oil market never recovers.

AOC eventually deleted the above tweet (presumably someone pointed out to her that she was saying the quiet part out loud), and replaced it with a less jubilant, but no less insane take:

This snapshot is being acknowledged as a turning point in the climate movement.

Fossil fuels are in long-term structural decline. This along w/ low interest rates means it‘s the right time to create millions of jobs transitioning to renewable and clean energy. A key opportunity. https://t.co/UqT8DI5u2I

Blogger Stephen Miller's (not the White House advisor) response to this was exactly right:

“Now that global pandemic has killed thousands and left millions unemployed, we can finally get what we want” is not the genius take she or her instagram stand think it is, which is why you don’t see the Dem nominee jumping into the boat.

As unprecedented as this market instability is, it seems likely that it will be beneficial to oil-producing market economies such as the U.S. and Canada in the long term, and detrimental to those authoritarian nations like Russia, Saudia Arabia, Iran, and Venezuela, who depend on elevated oil prices to survive. Once our economies reopen (as they are already beginning to do), consumers will be able to take advantage of the reduced prices and that, coupled with clever policy proposals on the table (including, for instance, suspending the EPA's ethanol mandate), will begin the process of stabilizing the oil market, whatever AOC and her friends think.  (Ironically, their plan would drastically reduce our economic elasticity and make us as vulnerable to market shocks as the above mentioned petrostates).

Once a return to normalcy is in sight, it will be nice to be able to look back at this from a distance and remember the moment when the current face of the American climate movement let her mask slip and cheered real human suffering for the sake of her totalitarian agenda.