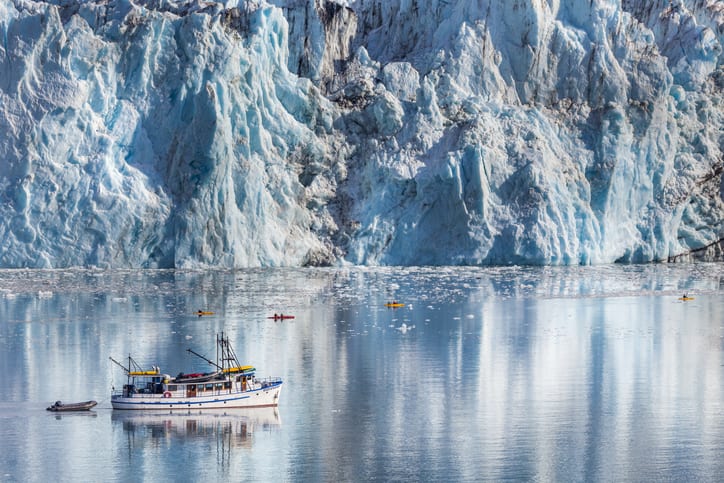 It's the End of the World: the New York Times reports tomorrow's (or someday's, maybe) news yesterday! Hedging buzzwords in bold:

Climate change has increased the risk of a huge landslide in an Alaskan fjord that could cause a catastrophic tsunami, scientists said Thursday.

Warming temperatures have caused the retreat of a glacier that helps support a steep, mile-long slope along one flank of a fjord in Prince William Sound, about 60 miles east of Anchorage. With only a third of the slope now supported by ice, the scientists said, a landslide could be triggered by an earthquake, prolonged heavy rain or even a heat wave that could cause extensive melting of surface snow.

While the slope has been moving for decades, the researchers estimated that a sudden, huge collapse was possible within a year and likely within two decades. “It could happen anytime, but the risk just goes way up as this glacier recedes,” said Anna Liljedahl, an Alaska-based hydrologist with the Woods Hole Research Center in Massachusetts, who was part of the team.

Alaska’s Department of Natural Resources, after being briefed on the findings, issued a statement Thursday afternoon warning that “an increasingly likely landslide could generate a wave with devastating effects on fishermen and recreationalists.”

Note the assumption in the first two words of the story that "climate change" is indisputable and that, miraculously, it's unfolding before our eyes right during our lifetimes! The rest of the story is filled with wouldas, couldas, and shouldas. The fact that the glacier is calving naturally never seems to occur to them, or that it's just doing what glaciers do, which is receding.

But hey, at this point it's all just speculation:

Dr. Liljedahl said that although their findings have yet to be peer reviewed, “we realized we needed to let people know.” She said the researchers hoped that money would be made available for near real-time monitoring of the slope that could provide a warning if a landslide and tsunami occurred.

And there you have it.