Meditating Upon the Black Stuff

Still down there Down Under.

Call me a cockeyed optimist. I’m not convinced that the end is nigh. True a giant asteroid might come hurtling our way. However, I still regard dire warnings of the imminent end of times as the stuff of outlandish cults. Or, more entertainingly, humourists.

I might be missing something. Alexandria Ocasio-Cortez, David Attenborough, Greta Thunberg, Prince Charles, and too many other notables to mention, think differently. They’re sure we are on our last legs; with only, what is it now, something like nine or ten years left to save the planet? Don’t hold me to this number. I get confused when threatened with extinction.

If those who do think the end is nigh were asked, I feel confident they would nominate coal as the biggest culprit. It spews out CO2 like nobody’s business. According to the U.S. Energy Department, per unit of energy produced, coal emits around twice as much CO2 as does natural gas. And, to boot, it has been the predominate source of power for industry and households for a very considerable time.

According to the Resources and Energy Quarterly published by the Australian government, thermal coal still accounted for 45 percent of global electricity production in 2018. Hence, coal is still doing its darndest to queer the planet and, shiver in trepidation, there’s 133 years of proven reserves of the black stuff still to dig up. But it’s not all bad.

To coal or not to coal? That is the question.

It’s good for Australia. Thermal coal is the fifth biggest exporter earner behind (in order) iron ore, metallurgical coal (there’s that coal again), natural gas and gold. The prime minister is torn. Electorates in coal country in Queensland gave him victory in May 2019. Careless of dire predictions of doom, they selfishly voted their wallets ahead of the planet. Yet, from royal progeny to billionaires to zealots to inner-city elites to banks to boardrooms to the media, the anti-coal clamour is deafening. Politicians wilt.

In 2017, to the chagrin of the great and good, Scott Morrison -- before he became prime minister -- theatrically brought a lump of coal into parliament to make a powerful case for coal. And now, only a few short years later, is contemplating zero net emissions “as quickly as possible.” Trying to mix coal and zero emissions is a species of double-think. He’s a politician, he won’t notice.

Coal is enigmatic. Cheap energy to some, demonic to others; and with a future which is hard to pin down. Here is a trick question. How many coal-power plants are under construction? Answer: it depends upon which newspapers or fact-check websites you read or TV channels you watch. Greens and their allies want to convince everyone that coal is uneconomic, and on the way out. Coal lobbies present a bullish outlook for coal. Different interests, different schticks, different facts.

That said, whatever source of information takes your fancy, a large number of new coal-power plants are on the way. This is simply because coal provides cheap and reliable power and the Chinese and Indians, e.g., aren’t stupid. No need to guess who is. 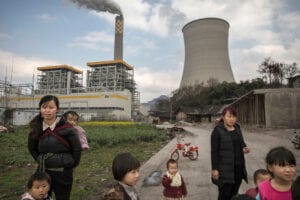 The Chinese know how to make electricity.

When I say new coal-power plants are on the way; not so much in Australia, where they are on the way out. An irony you might think in a country with rich coal reserves, which for so long underpinned the competitive advantage of Australian manufacturing. Not so to those who believe Australia has to do its bit by closing down all of its installed coal-power of around 23 GW capacity in order, wait for it, to offset the up to 250 GW or so (depending on what you read) of new capacity China is intent on building. Do the sum.

Here is something else: on December 2, the International Union for Conservation of Nature (IUCN) claimed that coal dust blowing from coal-loading ports 100 to 1,000 kilometres away threatened, the perpetually threatened, Great Barrier Reef. Peter Ridd, cancelled by James Cook University In Queensland for daring to suggest that the Reef was not under threat, described the claim as “ridiculous.” Ridiculous? How about “crackpot.”

On much surer footing than the tendentious apparatchiks at the IUCN, Michael Shellenberger (Apocalypse Never) goes into bat for coal. Coal, he says, with twice the energy of timber, saved the forests, while fuelling the industrial revolution. But for coal there might have been few trees left. Excluding those conservationists who bizarrely favour making them into biomass, everyone likes trees. Ergo, coal’s role in preserving them must be good.

Then again coal must be bad. The Economist (3 December) told us that, “unlike natural gas and oil, it is concentrated carbon, and thus [in America and Europe] it accounts for a staggering 39% of annual emissions of carbon dioxide from fossil fuels.”

That might be true, who knows, but this isn’t: “Solar farms and onshore wind are now the cheapest source of new electricity for at least two-thirds of the world’s population.” Here the poor sods at the lower end of the prosperity scale in Asia and Africa are invited to “consign coal to museums and the history books.” “Much work lies ahead,” avers editor-in-chief Zanny Minton Beddoes.

I just wonder how much work has to be done to persuade developing regions of the world to use the cheapest source of electricity? They must all be dim-witted, if Ms Beddoes is to be taken at her word. Of course, Ms Beddoes is spouting agitprop. To be kind, she can do no other as a dedicated follower of the party line.

The case against coal is not based on economics. It is the cheapest source of 24x7 power. The case stands or falls on the danger CO2 presents to the planet.

If the alarmist predictions are wrong then the trillions of dollars spent on wind and solar farms has been the gravest waste of resources in the history of mankind. As the size of the effect of man-made CO2 on global warming is matter of conjecture, a contested hypothesis at best, it is inexplicable that is has taken such an iron grip on the minds of so many in positions of influence and power.

The overwrought reaction to Covid is similarly puzzling. Perhaps when religion wanes, collective belief is more susceptible to superstition and mass suggestion. If that is so; what, I wonder, will be the next hobgoblin to scare us into submission?