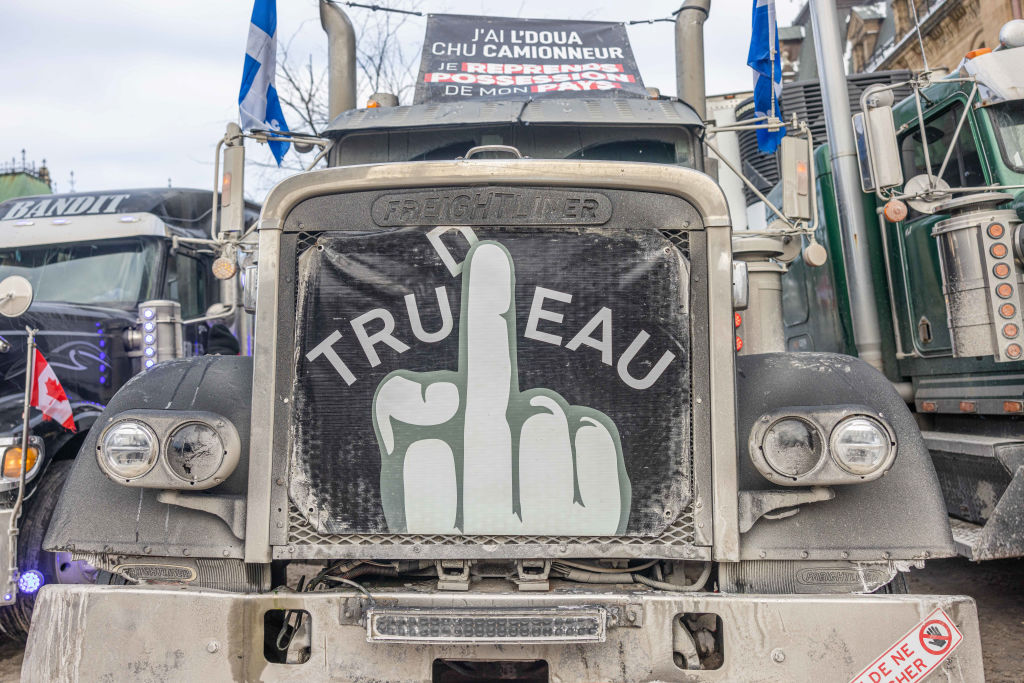 Spelled the same in French.

Breaking news: Justin Trudeau announced this afternoon that he is revoking the Emergencies Act, just two days after getting it passed in the House of Commons. From The National Post:

Trudeau credited the end of the downtown Ottawa protests with cabinet’s decision to revoke the measures, a move he said was needed to end the illegal occupation and clear streets from dozens of parked vehicles and big rigs. “We are confident that existing laws and bylaws are now sufficient to keep people safe,” Trudeau said during the press conference, adding Ottawa will continue supporting local police and authorities

This is good news, of course, but it is also worth noting that his justification for this move makes exactly zero sense. "Existing laws and bylaws" were always sufficient to keep people safe while handling the protestors in Ottawa just as they were sufficient to deal with the border blockades some truckers set up for a time earlier in the protest. And the protests in Ottawa had already ended when Trudeau put the Emergencies Act up for a vote in parliament which was, let me reiterate, only two days ago.

So what has changed? Well, I think it is safe to assume that there were three pressure points which made Trudeau and the Liberals crack.

First, polling. Much was made as the protestors were being cleared out this past weekend of the polling which found that two-thirds of Canadians supported Trudeau's use of the Emergencies Act. But public polling since that time has been more divided. Very likely the images coming out of Ottawa of baton-wielding cops in riot gear getting rough with peaceful protestors and mounted officers trampling them made people more conflicted.

Remember this image. Remember what Trudeau did to Canada. pic.twitter.com/Z5b3kfWK1y

But even the initial poll requires a deeper reading. It also found the same percentage of people who supported Trudeau's measures saying they “fear for the future of Canada,” and nearly as many said, “they have lost faith in the ability of the country to keep peace, order and good government in place.” For a majority of Canadians, the protests had become an emblem of their country in chaos. Now that the protests are over, they are likely to turn on the man responsible. My guess is that that's exactly what Trudeau's internal polling is telling him.

Second, international opinion. Canadians are extremely proud of their standing in the international community. The smallest G7 country by a wide margin, Canada has long been known as a country that "punches above its weight." But the international reaction to Trudeau's handling of the protests has been brutal. The English speaking world has been treated to a long train of headlines slamming Trudeau and wondering how Canada could go so far down this path. "Trudeau’s Destructive ‘Emergency,’" "Justin Trudeau Has Disgraced His Office," "Police forces in Canada scrutinized for excessive violence with peaceful Freedom Convoy protesters,""Justin Trudeau's Ceauşescu Moment" (referring to Romanian dictator Nicolae Ceaușescu), and on and on. It was relentless. The CBC can cover for the prime minister all it wants. Sooner or later what the rest of the world is saying is going to bleed through.

Finally, and perhaps most importantly there is the upcoming Emergencies Act vote in the Canadian Senate. The senators had their first debate on the Act yesterday and many of them sounded reluctant to give the government a win:

Many wanted to know on what basis the government decided to invoke the Emergencies Act in the first place. That information has not been made available to Parliament, most notably ongoing investigations and intelligence information. Senator Dennis Glen Patterson said: “there is a certain amount of ‘trust us’ in the government’s justification of these extreme measures.”

“This is a serious step that we’re contemplating here today,” said Conservative Senator Elizabeth Marshall. “What exactly happened that the government decided to invoke the act? Because it seemed like for three or four weeks, there was nothing, they were just tolerating it.” She continued to ask why the government appeared “to be so late in assessing this monumental threat that they’re talking about.”

Conservative Senator Leo Housakos accused Prime Minister Justin Trudeau of stoking the “flames of division” in refusing to speak to the protesters who occupied the streets of Ottawa and calling them names such as “marchers with swastikas” and “defenders of Nazism.”

The potential humiliation of losing this historic vote in the senate was likely enough to convince Trudeau to revoke his use of the act. Senator Denise Batters, in particular, tore him apart in a wide-ranging speech on the senate floor which deserves to be watched in full.

Of course, this whole episode has been a humiliation for Trudeau and for Canada as well. It will dog him for the rest of his career, one that is hopefully cut short by the voters, who are sick and tired of being ruled by a tin-pot dictator.