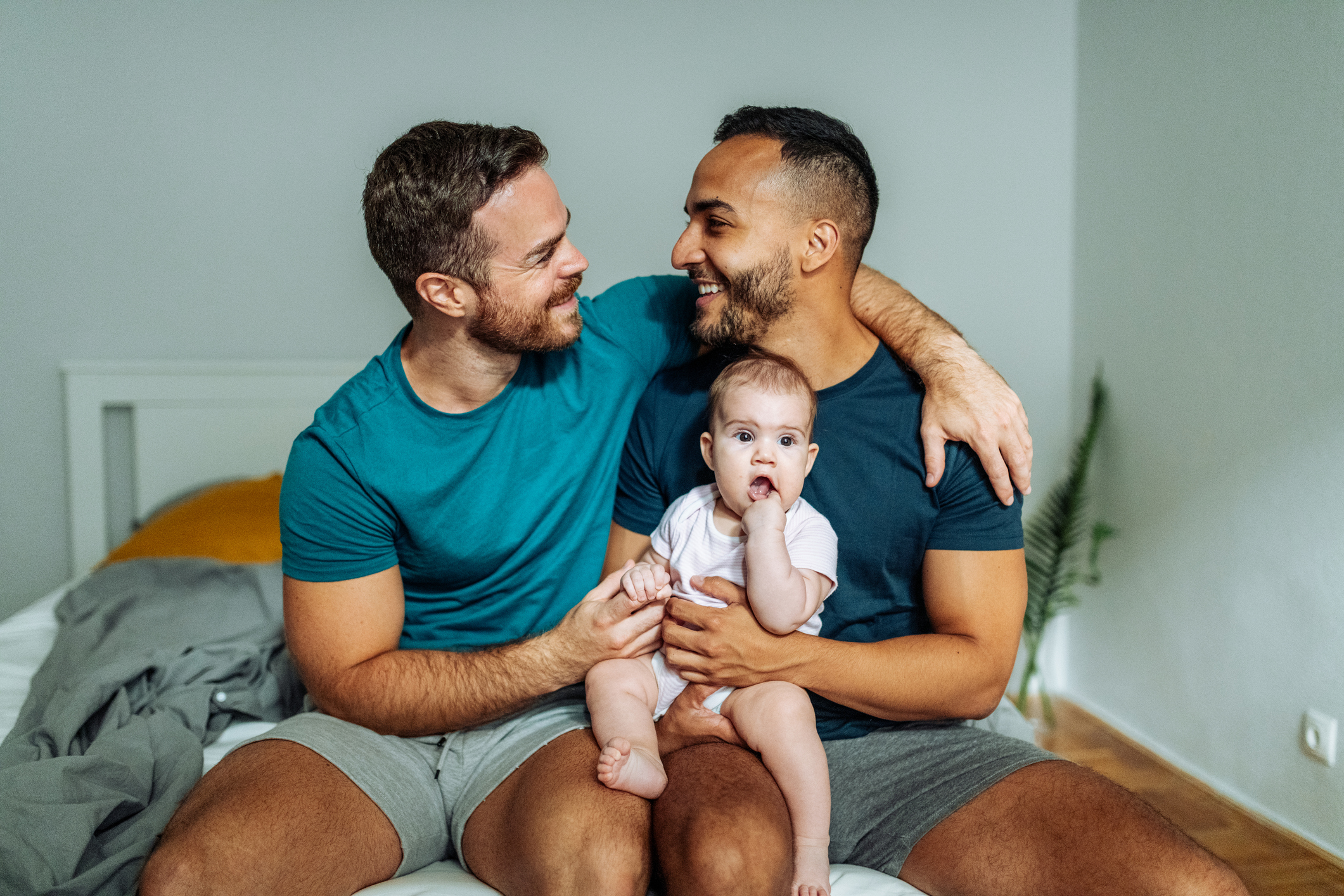 Happy families are all alike...

A sample conundrum from everyday life: If a Latino transsexual, a black homosexual, a disabled, homeless white woman, and a mixed-race nonbinary person arrive simultaneously at four-way stop sign, which of them has the right of way? Witness the dilemma playing out in Los Angeles, where some favored pets of the left, known to most as drug-addicted vagrants but to their many admirers as the “unhoused” or “people experiencing homelessness,” are preventing people from charging their precious electric cars. The Daily Mail recently reported that access to some EV charging stations on Los Angeles streets has been blocked by homeless people, some of whom have appointed themselves as the stations’ “attendants,” presumably charging a fee for their use.

So, what’s the environmentally conscious Angeleno to do when some malodorous bum stands between his Tesla and its needed voltage? Call the cops, you say? Yes, in a sane world, in a just world, the police would indeed keep the sidewalks clear of vagrants who claim swaths of public property for their own use. But this is Los Angeles, which, in its desire to be hospitable to these vagrants, is neither sane nor just. The Los Angeles Police Department, as eager as its members might be to restore order on the streets, is constrained by the city’s political class from taking action against the homeless, who, like those in most Democrat-governed cities, have in effect been made immune from most of the laws the rest of us must obey. 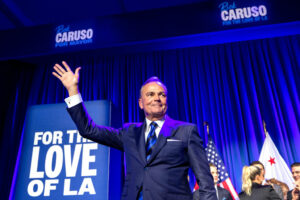 Los Angeles voters had an opportunity to change this, but in November’s mayoral election they chose the status quo, electing the reliably leftist Karen Bass over real estate developer Rick Caruso. Yes, Bass took office promising action on the homeless, declaring a “state of emergency” immediately after being sworn in last month, but anyone hoping for a significant reduction in the widespread blight caused by vagrants in Los Angeles will surely come to be disappointed.

There are two main reasons for this. First, as counterintuitive as it may seem, there is big money to be made in homelessness. The city of Los Angeles allocates $1.2 billion on homeless programs in the current budget, and Los Angeles County will add another $532.6 million to the pot in the 2022-2023 fiscal year. Some significant portion of this money flows through the various nonprofits ostensibly dedicated to helping the homeless. To the uninitiated, the term “nonprofit” may conjure images of selfless people laboring for the betterment of mankind while taking little for themselves, but while the organizations themselves do not technically profit from the enterprise, some of the individuals they employ make out handsomely.

A big name in the California homeless business is PATH (People Assisting The Homeless), which has a growth record that would be the envy of any for-profit company. According to PATH’s IRS 990 forms, total revenue has grown from $7.6 million in 2011 to $88.5 million for the fiscal year that ended in June 2020. Out of the 2020 figure, about 39 percent went to employee salaries. The CEO for that year, Joel Roberts, was paid $265,951, a bump of more than $15,000 from the previous year. He was recently succeeded by Jennifer Hark Dietz, who in her former post of deputy CEO had to scrape by on a mere $214,982 in 2020. The salaries of six other PATH executives ranged between $130,526 and $171,982 that year.

If the homeless problem were to be magically solved overnight, where would people like these go to earn such a comfortable living? No, there are too many people, inside and outside of government, who are too deeply invested in homelessness to see it ended. The more money made available to address a perceived problem, the greater the incentive to grow the apparatus that spends it and the more people opening their hands to accept it. This is how we arrived here.

I have lived in and around Los Angeles my entire life and spent more than 30 years with the LAPD. I can recall a time when the city’s homeless population was confined to the few square blocks of downtown known as Skid Row, where even among the homeless certain rules were observed. With the proliferation of organizations intended to help the homeless, with the infusion of the billions of dollars dedicated to that purpose, Los Angeles has attracted vagrants from across the country and beyond, offering them a lifestyle free of obligations in a year-round temperate climate. Today there an estimated 40,000 homeless people in Los Angeles, and those rules once observed in the Skid Row area have become but a memory as homeless encampments have sprung up in virtually every neighborhood in the city to go largely unhindered due to the misguided notions of “compassion” shared among the city’s politicians. 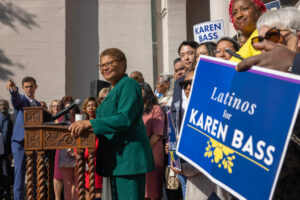 The other reason L.A.’s homeless problem won’t be soon abated lies with Mayor Karen Bass herself and her fellow travelers in municipal government. For all her talk of an “emergency,” Bass is unlikely to take the most obvious step necessary to correct it, which would be to enforce laws long on the books but in recent years ignored with near impunity among the homeless, primarily those against theft and drug use. Yes, there are law-abiding people among the homeless but they are rare. When you see a homeless encampment on the streets of Los Angeles or any other city, the safe assumption is that every one of its occupants is a thief and a drug addict.

New PATH CEO Jennifer Park Dietz decries what she sees as the “criminalization of homelessness,” ignoring the fact that, at least in Los Angeles, one would need a diplomatic passport to enjoy more immunity from the law than a homeless person. And new mayor Karen Bass, who as a teenager built houses in Cuba with the Venceremos Brigade, and who rose in Democratic politics by reliably toeing the leftist line, will be the last to tilt at any of the left’s cherished shibboleths.

Caught between a restive population grown weary of the homeless and a municipal government bent on coddling them is the LAPD, whose chief, Michel Moore, recently announced his bid to be reappointed for a second five-year term. Moore is at least as much a politician as he is a police officer, probably much more so, and while serving under previous mayor Eric Garcetti he revealed his eagerness to adopt any policy that suited Garcetti’s aims. 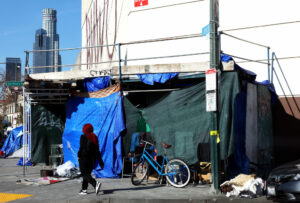 So pliable has Moore been to his political masters that his reappointment was thought to be a shoo-in, but when the Los Angeles Times, i.e., the third branch of city government, editorialized against a hasty decision on the matter, the involved parties drew back for reassessment. I read this to mean Moore, if he hopes to be reappointed, will have to do even more kowtowing to Bass and her leftist cronies, which can only mean a more constrained police force. The city saw a slight drop in homicides in 2022, which is welcome news, but robberies and every type of property crime increased while overall arrests continued their years-long decline.

In her campaign for mayor, Karen Bass promised to “dramatically reduce street homelessness” and “end street encampments.” Her predecessor made similar promises in 2013, only to see the problem grow immeasurably worse during his tenure. Unless and until Bass instructs her cops that the homeless are subject to the law and should suffer consequences for breaking it, she will have the same experience.

Do MAGA Republicans Cause Street Crime?

The Decline and Fall of the Blue Wall