Diary of an Acclimatised Beauty: Up in the Air 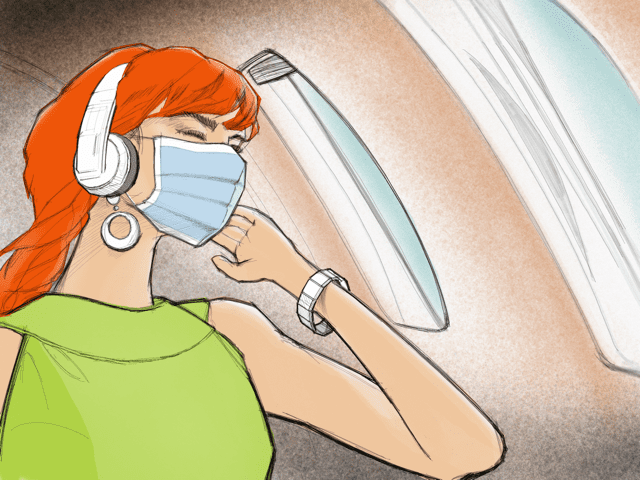 Getting home was a bit tricky, the airports are like third world countries: no newspapers, no restaurants, and no lounges (still!).  Just a lone Starbucks where no one is wearing masks either.  The upside was no lines—but that didn’t stop the TSA from ignoring the PreCheck on my boarding pass.  “That’s closed” they tell me, as eight agents stand round chatting and making me take my computer out. Seriously? How can that be closed? It’s not even a thing! It’s just their random decision. And on top of that I had to wait for the screener to shuffle back to the screen. I don’t understand how eight people in electric blue poly-blend can’t designate two people to be at the ready. Meanwhile here I am, out in the world, serving my clients and trying to make the world a better place.

Placing my computer in a plastic tray was not something I’d planned on. It’s not something I ever have to do in non-flu season -- but of course, on a day where I risk contamination and the screener literally has nothing better to do… I had to throw away my neoprene sleeve and wipe the case down with alcohol spray post-inspection.

Therapists have to be the other slackers in this crisis. I know I should be practising gratitude but they have just fled.  Part of my job has always been half-therapist. but everybody is wigged out these days -- extra wigged out -- and the shrinks should be on FaceTime twenty-four-seven, dispensing advice and pills by the truckload. How can they call themselves doctors, what with the media showing us pictures of freezer trucks parked outside of Queens hospital every day? As a public service I wanted to fly there and put giant Eskimo Pie stickers on all those refrigerator trucks but no one would appreciate that, least of all the Eskimo Pie company.

One thing I’m pretty sure about, I’m not going to be a bigger patron of the retailers who fill up my email with daily feigned concern for my health “amid corona”.  I mean, if you are concerned to the point of sending me a daily email, then seriously, just send a ventilator already.  For their part, Aspinal reminds me this is “A time for togetherness,” which upon further investigation means leather board games like chess for just under a thousand quid.  Lilly Pulitzer providing masks made from their signature prints to nurses I can forgive, because they are providing a needed, albeit trademarked, item. But for the rest—spare me the daily concern for my safety when your store has already been shuttered for weeks. I will say well done to Delta and BA for extending their mileage programs and more importantly their VIP lounges—YAY!  Meanwhile American tells me that I “remain their top priority” and I should keep earning miles by buying obscure wine from them. I swear they need nanny to tell them that’s very bad manners indeed.

More than anything I need a location tracking app to keep me up-to-date and out of jail; last week plastic bags were banned, this week it's how dare you risk the health of our employees with your reusables! And the lockdown/shelter/stay-home orders seem to be landing more than a few people in hot water -- we can drive unless pulled over, we can exercise unless??  Also needed: a divorce attorney, but they seem to be busier than toilet roll factories and everyone’s just one irritable juice-fast away from packing it in. Believe me I see those couples at dinner--equally rigid and exhausted.  And I see those same men out in the world, with a spring in their step, and a lilt to their voice -- so willing to help open a door or with a parcel.

Which brings me to my slightly early departure from sunny Palm Beach. It all fell apart when Mr. G, my client's husband, lost the cable to his noise cancelling headphones (it’s not a standard cable) and Amazon isn’t delivering -- and all on the very same week that their kids were home and the tutors aren’t showing up cause the kids were supposed to be skiing, and no one can work the sprinklers cause the gardeners won’t show up without hazard pay, and somehow the dog ate a dead iguana and suffered paralysis. And now everybody's in lockdown. Net-net, Mr. G wants out, but he couldn’t flee to a hotel or even his club, and he sure can’t flee when the kids are home so he retreated to the pool house—hence discovery of one paralysed Boykin Spaniel. It’s not the whole story but it’s enough. So I fled, because I can’t get any good work out of her in this state, and because people never forgive you if you’re around when they are at their worst.

Hovering just above this British girl's beloved Los Angeles I try to check the traffic on the 405 as I’ve always done.  There were very few cars on the road, a scattering of police vehicles waiting for… I couldn’t imagine what, a few trucks, and very few planes landing. Eerie. As we got even lower I could see some stores boarded up, National Guard trucks and very few planes parked at the gates.  What if I couldn’t get out until June? We landed and I checked my messages, hoping Mrs. G’s therapist had responded to my message -- he hadn’t.  Then I thought of ringing her but I know she does a chakra meditation before lunch. One second later…PING! A message from Mrs. G.  I’m sacked for my “incredibly selfish and self-centered behavior” followed by “Even John can’t believe you left”. So much for the chakra.

We’re at the gate. I’m not even going to respond. God, she’s such a ninny. Before me she would open with a central point from “the book that changed her life," ergo-why am I listening to you when I should be reading that book?  Heading into the terminal, nearly everything’s closed, the bookstore, the Burger King, the grilled cheese turned bulgogi spot and it just feels like a police state—everyone with their eyes down like that nebbishy accountant that’s secretly stealing from you. This isn’t my California. I hover in front of the closed Admirals Club before deciding where I can sit to get my bearings. I lean up against the locked metal roll gate at Duty Free and scroll to see what part of the world is still open—to where can I escape? That was previously Italy’s role in the world.

One unfrosted old-fashioned and a Dunkin' Donuts decaf later, I’ve rebooked myself to HNL where they have very few cases of anything flu-related and the Halekulani is still serving in the dining room. Paradise. Vitamin D, vitamin C and turmeric-infused curry is just what the doctor ordered and survival is once again assured amid plumeria-scented linens and the warm breeze that barely gets past the heavily planted entrance. It’s the self-care I need to make it through this fiasco, and is frankly just good common sense. A depressing four weeks of dried beans and helicopters overhead is not anyone’s idea of wellness -- and I have a responsibility to my clients.

And if this impasse has taught me anything, it is that, love them or hate them, everyone seems to be spending lockdown with the people who matter.  And in lieu of that, Pimm’s o'clock comes a bit earlier.

3 comments on “Diary of an Acclimatised Beauty: Up in the Air”