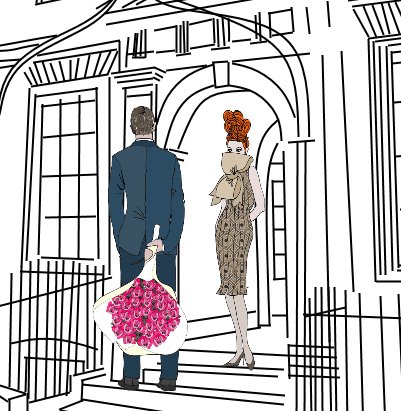 LONDON -- It didn’t take long before I was bored rigid, doing the things I did in this house in St. John's Wood as a child; stacking magnetic pennies, trying on mummy’s clothes and jewelry, and basically going through all of her neatly-organised treasures. I’d long since given up pinching cigarettes from daddy’s study which is just as well given that he no longer keeps any. I did find piles of my own games that I threw out, as well as notebooks I’d kept for reasons I’ll never understand.

I guess I thought in time they’d become interesting like the things Mother kept, but of course that wasn’t to be. Judith had all sorts of things like ostrich feathers and faded press cuttings from when her own mother was a debutante—end of an empire she always said, referring to granny's debutante season.  Hers was of course long before the daughters of self-made plutocrats got in line with cash money, and sniping journalists brought it all crashing down; 1958 would be the very last year that a debutante would curtsey before the Queen, thus ending mummy's chance of ever being presented at court, and mine for that matter.  It didn't help that Princess Margaret even more crudely remarked, “We had to put a stop to it, every tart in London was getting in.” Rather rich coming from the very reign that monetised the monarchy like never before.

“Racket” indeed. It mattered not to me though because in the end, mummy married daddy, and popping me on a horse and asking me not to fall off too often, was the best they could hope for. If I’m honest, I guess I’d kept the notebooks in the event I’d somehow managed to catapult us into a prime position in Debrett’s, but my most recent accomplishment had been getting sacked by a Palm Beach housewife turned bestselling thought leader. For this reason alone I wasn't upset that Judith was in the country. It's one thing to work for a bounder, quite another to be sacked by one, and she'd have driven this point home even if I could do nothing about it. Judith doesn't much approve of my "green distraction" as she calls it. She would have loved to tell me that the very people who employed me, and who make a living off of their own green distraction, are the ones heating and cooling 15,000 square feet.

Inexplicably, Judith had kept loads of photos of me and Patrick, (good lord!) and even arranged them in an album which is what got me to thinking about the whole hierarchy theme in the first place -- the prospect of which was now literally and figuratively miles from my life in Los Angeles. But it never would have worked with Patrick and me, what with his business interests, and total disregard for our beloved planet. It was at a dinner with his parents that he argued that climate has always changed throughout earth’s 4.5-billion-year history. I mean really how could one be so callous? Of course, I explained, it has always been changing but the really massive changes began 10,000 years ago when humans developed agriculture—only for him to counter that the planet, long before man came to be, had seen both boiling and freezing temperatures.

As I said, it was dinner with his parents so I really couldn’t do as I wished, which would have been to explain that only in the past twenty years or so that had we seen such rapid changes and that previously it had taken hundreds of thousands of years for the same amount of change! But I couldn’t, and so I didn’t, but seemingly he had anticipated what I had wanted to say and insisted an accelerated timeline was “just not accurate”. Honestly, how could he!?

I smiled sweetly over my soup as the real steam poured out of my ears. You see, Patrick had worked with my father in mineral exploration for several years before developing geophysical software to employ in the field. Deep down I knew I was right about the planet but how was I going to argue with that level of rigidity? Outmanned and outgunned, I changed the subject to a recent and rather gruesome equestrian spill in which spectators actually heard the tearing of the tendon fibres as the horse horrifically crawled on his cannons before spinning on his back, like a breakdancer in Trafalgar Square. I still have night terrors when I think of that poor horse but thus ended the dinnertime planet debate.

Back to mummy’s closet: I got to thinking that these days in coronavirus lockdown can really send the mind down a rabbit hole. Luckily, I could hear my father opening a package from Paxton and Whitfield (truly the best cheese on this planet!) and wine was soon to follow. And “soon” couldn’t come soon enough to suit me lately. I don’t ever remember wanting it to be Pimm’s o’ Clock sooner than during these dark days of eternal consignment to Boris Johnson's oubliée.

I’d hoovered my third charcoal and Aldwych goat when father asked, “Is this how it ends?” Which was so like him.

“Fair enough,” I replied. “What shall we talk about then…Boris? Patrick? I mean BORIS! And I added…“I don’t know why I said that.”

“Yes, Mother kept!” I insisted. ”Mother kept some photographs of us that I hadn’t seen…”

“Until… you found them today”

“Yes, not until today when I was going through her things, as I always do.”

“Listen,” I continued, “I know you all think I ran away to California to put this behind me…”

“Surely we don’t all think anything”, he interrupted. And okay, he had a point, I was guilty of a sweeping statement but I know they do think it.

“Ah yes” father began, “Boris it seems has found himself fifty pages in which to clarify the newly-adjusted points of lockdown. There is the as-yet elusive, although much anticipated: Step One that will begin on Wednesday. Followed by the equally elusive Step Two—to start on June first. And followed closely… by Step Three. So you see it’s all rather logical. And he continues with what he then calls, and rather aptly I might add…‘further steps. Plus he wants us all to start riding bikes again.”

Just then father got up as though he’d forgotten something and I heard our door chime. I opened the door and even with a mask, it was unmistakably… Patrick.

3 comments on “Diary of an Acclimatised Beauty: Old Flaming”