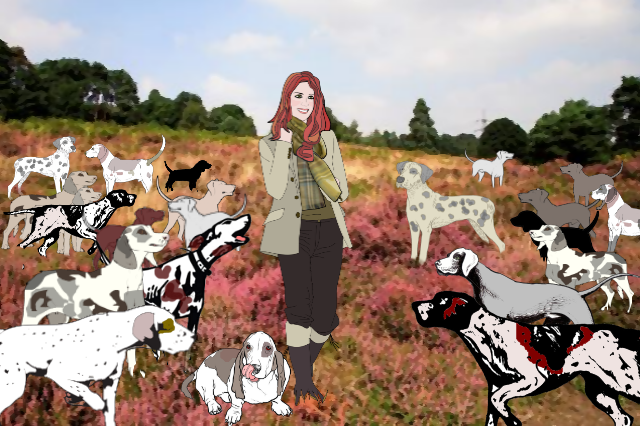 Where’s a good moth ball when you need one?

There’s nothing like a weekend in the country especially when all of London is going to be there! I’m speaking, of course, of going for a shooting holiday, and honestly I can’t wait. I’ve three days to pack, get a manicure, some new frocks, and a coiff from Daniel at Jo Hansford.

Judith (mummy) is so glad I’m preserving tradition but she forgets ‘tradition’ used to come with a small staff. She should have stayed home to help me but as usual—poof—the ever-vanishing Judith. And a shooting holiday always requires shooting clothes. Lots. So where are mine? I rifled through the wardrobe in the spare room, the crawl space in my childhood room, the trunk under the stairs—nothing. I’d hoped to take my things straightaway to Jeeves for freshening but I was going to have to wait for Judith. With little chance of success, I started poking through the hall closet when daddy became aware of my frustration.

‘Looking for something? Plastic straws perhaps? Because we’re all out—been feeding them to dolphins’, Daddy said.

‘Ha. Not funny’ I replied, ‘and anyway it’s sea turtles’. I was not in the mood. ‘I’m looking for my sporting clothes’. I said.

‘Oh my god, NO!’ I shouted back. He knows they aren’t there but he can’t resist a chance to bug me about my house in LA.

‘Maybe at the country house?’ he said.

‘Why would they be at the country house?’ I asked. 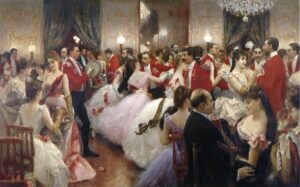 UGH! Of course that’s where they were. And now I had to decide whether to drive to the country or pop over to James Purdey. ‘Tradition’ doesn’t make it easy to be an environmentalist. The risk of buying new was that only Americans show up to a hunt with spanking-new clothes. It’s just not the done thing. What a mess!

I thought of calling Isabella Lloyd Webber whom I know from so many eventing weekends but I knew she’d sooner pay someone to break in her clothes than show up looking naff. I bit the bullet and immediately felt better upon arrival at Purdey’s. The salesman was quite chatty and said I’d just missed Gemma Owen who left with three bags (new!), that they’d shipped loads to Delphi and Marina Primrose (new and new), and they’d earlier served Lord William Gordon Lennox, though one expects to see him in new everything—I’d never seen him out of his signature cream suit.

When I reached home I saw my broker had called twice. WHY?? I’m not some high-flying trader with margin calls. I’m not even sure I know what a margin call is but seems he wanted me to sell all interests in rechargeable e-scooters. I’d taken a rather large position owing to the benefit to the environment. Plus we expect them to be wildly popular once they become permanently legal. But it seems London had 130 e-bike blazes in the last year alone.

‘But it’s the trial period…’ I protested, and he told me e-bikes had caused more than 200 fires in New York, including a quite-bad high-rise fire. He went on about impending lawsuits, poor-quality parts, and an entire e-scooter maintenance facility had gone up in smoke. 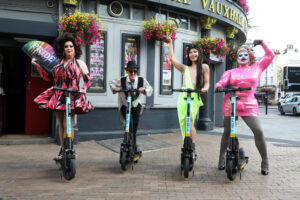 It's all fun and games until somebody bursts into flames.

‘But that’s China’s fault—they are giving us poorly-designed batteries, we just need more regulation’ I insisted. I heard my father snicker in the background and I realised just how futile my protest sounded. ‘Fine then sell!’ I said. ‘Sell it all’. It was a blow and felt I was letting the planet down. All except for the black smoke and lithium solvent contamination.

I put my new clothes in the solarium to air out and headed up to my room. It had been a trying day but all of my hard work paid off when two days later our helicopter loomed over Inveraray—the first of several spectacular locations. I hadn’t been here since their now-defunct horse trials.

The estate was now focused on winning a Purdey Award for Game Conservation and even before the hunting ball we had to sign a declaration that we, and all connected with the shoot, were conversant and in compliance with the Code of Good Shooting Practice. Inveraray’s entry this year was habitat improvements and species biodiversity.

When I got to my room and opened my bags the unmistakable smell of 'new' filled my air… it was a mix of plastic, and wool sizing. Where’s a good moth ball when you need one?

I took my place at dinner, escorted by the future Duke of Argyll and his good friend Max, a known Jack-the-Lad swept in. ‘Oooh! I know you! I’m sure I do’ he insisted. But I only knew him from his reputation: a brash, cocky university dropout who was making a career of his fast friendship and love of shooting.

Our dinner was served… this year’s winning recipe entry to the Fieldsports competition: ‘Snipe Jacket Potatoes’. It was a whole snipe, complete with head, and long legs crossed almost comically and encased in a potato cocoon. It was so much more disgusting than any bug I’d ever served and I started gagging. ‘That’s it… you’re her… that bug hostess!’ Max exclaimed as I continued to gag and fled the table.

I decided to stay away at least until the next course. My mobile lit up with a text from my broker… ‘ALL OUT’ he wrote. I tapped back to him… ‘just out of curiosity what was the exact stock symbol of the shares we just sold? I may wish to recommend it to a new friend’.

Diary of an Acclimatised Beauty: Hailing

One comment on “Diary of an Acclimatised Beauty: Hunting”