Diary of an Acclimatised Beauty: Hostessing 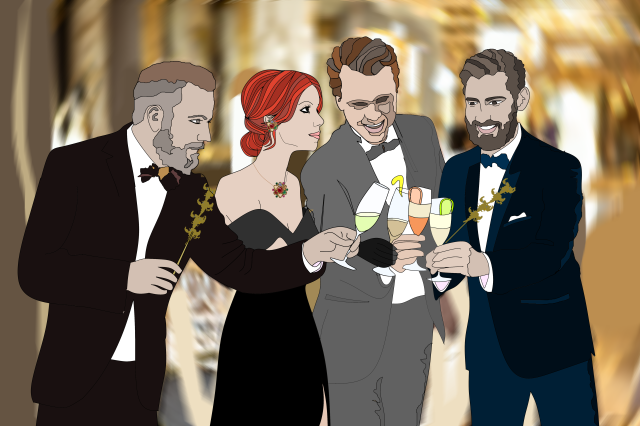 Twenty-somethings will eat anything on a stick.

Late start today because my refillable shampoo pouch went wonky on me and spilled everywhere. Literally everywhere. If I were home in California, I’d just leave a note for my housekeeper but I’m at my childhood home in St John’s Wood and Judith (mummy) will likely notice and not be happy. A product stops being eco-friendly if the whole lot is wasted. UGH!

I was already a bit grumpy as my fellow eco-warrior, Bill Gates, came out against eating bugs on the eve of my latest insect cocktail party. Never mind all I’ve done to further the cause! But it’s cocktail week here in London, and so cocktails it is—bugs and all. And definitely no invite for Mister Turncoat Gates. 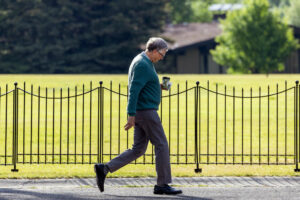 Does eating bugs make you fat?

Honestly I couldn’t believe his cheek! After buying up vast amounts of farmland and starting  ‘All Things Bugs LLC’, he was now telling people it wouldn’t end climate change. Can you believe it? I thought this was irresponsible in the wake of Hurricane Ian, which has now brought renewed focus to the climate crisis. For his own part, my father couldn’t keep himself from sending me a link to all the hurricane-drenched Teslas, now bursting into flames as the batteries corroded. It’s wasn’t a good visual.

There was also the inability to release the Tesla hood latch whilst a fire burned below but no power, no latch. I’d struggled with the occasional glitch on my own Tesla but shooting flames was a whole different story. A video soon went viral of a firefighter cutting into the bonnet with a rescue saw. I was frustrated that the day’s focus was on this instead of the planet. But as soon as I brought this up, Daddy reminded me that the planet had once been mostly water.  Oh Daddy, give it a rest!  So many things were not the way I planned them so I went up to my room to haggle over a catering order.

Covid may be over but a newly minted ‘Covid VAT’ sprung up in its place. Seriously? I didn’t understand how this came to be and marched right back downstairs and asked my father— ‘How is this called Covid VAT'?

‘As opposed to what? Carbon VAT? Or Windmill VAT?’ he asked.

‘No! I mean as opposed to regular VAT’.

‘Well clearly they got rid of that!’ he said.

There’s no talking to Daddy when he’s in a cheeky mood but the truth of the matter is I was being assessed 20 percent on all the alcohol due to ‘Covid VAT’. I didn’t push as I needed to focus on my event and he’d promised to turn up with Judith and another couple to round out the large number of twenty-somethings who’d RSVP’d. 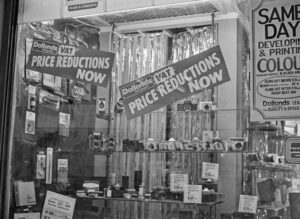 Judith had asked me three times if it was ‘Actually cocktail or just cocktail’. Sometimes I wonder how it is she’s my mother. I’d also told the venue I needed double the number of staff. A necessity these days because so many just don’t turn up ‘post-Covid’.

When I arrived it looked like a soundstage switching between scenes.  My wait staff was lined up against the wall scrolling on their phones as they waited for the tables and drink stations to get set up. The rest of the room was jammed with workers madly stacking chairs, pulling down the last group’s stage, and failing to open the wall dividing two connected rooms.

With forty minutes to spare I wasn’t panicked but that wall was not budging. The temperature of the room was absolutely glacial, and the other room—a sauna. An issue I understood would be solved when the wall came down, but down it was not. I asked three people to make sure they hoovered the floor, they didn’t—and still there was the wall. If I were in California someone would tell me that Mercury was in retrograde or have some explanation as to why the simplest things were made difficult.

With fifteen minutes to spare, a man began to knock against the wall in an attempt to coax it on its way. The panels were swaying in dangerously high arcs—but it remained.

Six minutes—no vacuum, two separate rooms and a group of guests queuing outside. This was not good. With four minutes to launch another man turned up with a spanner, and magically the wall disappeared, the floor was hoovered and a spot on the carpet was made to vanish. I hadn’t seen anything in England work this well since I was a child and before I knew it, the room was filled.

My buffet glistened. These were the largest crickets I’d ever seen and they formed an impressive serpentine line. The other creepy crawlies were equally artistic and looked almost good enough to eat. Thank God for the twenty-somethings. They would eat anything on a stick. 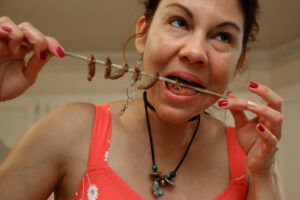 ‘I’ve just met your mother.’ said a too-fashionable gentleman who looked to be media. ‘Fascinating’, he added.  ‘She said you must get your eco-sense from her’. Was he mad? I smiled and ditched him in search of Judith. She was in a pale grey Saint Laurent, with matching fox stole.

‘Hello dear’  she said, ‘I’M RECYCLING! Isn’t it great? This is chinchilla as you may know, and maybe not the thing with your set, but even if it were not farmed, which it was, or at least I think it was— fifteen years ago this animal was not endangered.  And always better to use what you have, right? I think you could say I was ahead of my time!’

‘Uhh, yes. One could’,  I said, and I moved away lest someone snap a picture of us together. Her argument seemed rational but frankly I was out of my depth. In my haste to get away I ran smack into David Montgomery, newspaper mogul. Now married to the Hon. Sophie Montgomery, and in whose first wedding to the Earl Of Woolton I was a bridesmaid.

‘Who is in charge of this thing and is there anything else to eat?’ he asked. ‘I mean do you understand where this leads? No meat! Michelin is taking back stars from meat-centric restaurants and awarding them to chefs who serve more veg than meat’.

‘Yes, really. And the nerve of them! An outfit that made their way selling road tires, now wants to lecture us on climate!’

‘Uhh, yes. Crazy stuff.’  I said. ‘And do you remember my parents'? I said, leading him to them. Just now I didn’t think Judith could be any more appropriately dressed.

3 comments on “Diary of an Acclimatised Beauty: Hostessing”