Listening to Democrats suddenly begging the oil and gas industry to increase domestic output resembles nothing so much as the serial spouse-abuser who promises to be good, only to resume their abuse as soon as the cops leave, all the while pining to shower their cheap mistresses (in this case solar and wind energy) with ever more expensive gifts.

Energy Secretary Jennifer Granholm, to whom Donald Trump’s famous epithet “low-energy” applies better and more literally than to any other target, is begging the oil and gas industry to ignore the administration’s repeated assaults, and to carry on as if Trump was still in office:

We are on war footing. That means [crude oil] releases from the strategic reserves all around the world. And that means you producing more right now if and when you can. I hope your investors are saying this to you as well. In this moment of crisis, we need more supply. [Emphasis added].

Would those be the same investors that the Biden administration and woke capitalists like Black Rock’s Larry Fink are trying to intimidate from investing in fossil fuel production? The same companies for whom the Biden regime has sought to raise the cost of capital (with partial success already) through administrative harassment, such as setting the Federal Reserve and the Securities and Exchange Commission after them? The same industry whose viability the Biden administration’s Federal Energy Regulatory Commission (FERC) is trying to hobble with restrictions on new oil and gas pipelines? Never mind proposed or half-built pipelines such as the Keystone XL. 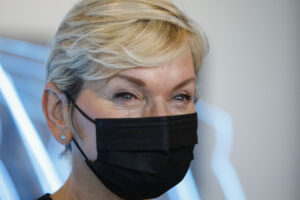 Granholm: Big Nurse is not happy.

There are ongoing efforts to shut down existing pipelines such as Enbridge’s Line 5 pipeline under a small stretch of Lake Michigan that transports more than 500,000 barrels of Canadian oil and petroleum products a day to the U.S. A court has temporarily stopped Gov. Gretchen Whitmer’s attempt to close Line 5, and FERC has abruptly halted its anti-pipeline rulemaking. But the crazed anti-pipeline activists will be back. The Biden administration is “studying” the issue, which means attempting to find another means to shut down Line 5, and FERC will surely return to its strangulating ways.

Unknown to most consumers, pipelines are the most versatile part of the energy supply chain, as they transport much more than crude oil between refineries. They can transport a wide variety of distillate products in addition to crude oil—propane in the particular case of Michigan’s Line 5—which adds to the overall resiliency and adaptability to consumer and industrial needs from the energy sector; Line 5 provides over half of the propane supply to propane-dependent parts of rural Michigan, for example. Non-pipeline transport, chiefly trains or trucks, is more expensive and difficult to secure.

Still other administration actions display its fundamental hostility to domestic oil and gas production. The Interior Department is dragging its feet on new required five-year plan for oil and gas leases in the Gulf of Mexico. Due in June, the plan is far behind schedule, and in the absence of the new plan no new leases can be processed. (Needless to say, Interior’s plans for offshore wind power leases are breezing through the department’s review process very quickly).

On the surface a neutral observer might think the Biden administration’s current energy policy is schizophrenic. It is actually mendacious, and rests on a cynical calculation that both the oil and gas industry and finance capitalists won’t play along in the long run. The great irony of America’s self-inflicted energy disaster is that profits for incumbent oil and gas producers are soaring, as are their stock prices. So naturally Democrats are going back to the Jimmy Carter playbook and demanding a “windfall profits tax” on current energy producers. In other words, please produce more, but don’t expect to get to keep any profits from expanded activity! 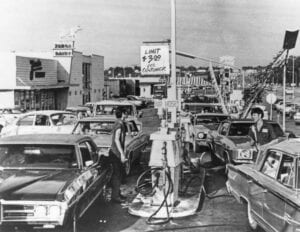 Oil and natural gas, like real estate, have been prone to boom and bust periods for more than 50 years, as large global price epicycles have delivered fat profits in boom times and inflicted severe pain during recessions and cycles of overproduction. Following the most recent wave of bankruptcies in oil and gas over the last decade, the domestic industry and its investors have at last become more disciplined about production and investment strategies. Neither producers nor investors are likely to be taken in by the administration’s temporary relief of the government boot on their neck. They know that once the current “crisis” has passed, the beatings will resume.

The last missing piece of this maddening puzzle brings us back to the opening analogy of oil and gas as the abused spouse of American industry. The oil and gas industry, with precious few exceptions such as Chris Wright, founder and CEO of the comparatively small Liberty Oilfield Services, does not defend itself against the green onslaught. Most of the oil and gas majors implicitly apologize for providing a product everyone uses, and promise to “do better” (that is, go out of business slowly) just as the abused spouse will internalize blame for the bruises her husband inflicts.

Not since Mobil Oil’s Herb Schmertz (ironically a liberal Democrat most of his life) fought back against the left in his famous “advertorials” in leading news publications in the 1970s and 1980s has the petroleum industry made a sustained defense of itself. A major oil company that tried this today would likely face an internal revolt from its woke millennial staff in the HR and public-relations departments. But until and unless the petroleum industry stands up for itself again, the abuse at the hands of the left will intensify until they are beaten out of existence.