Covid Elephants in the Room 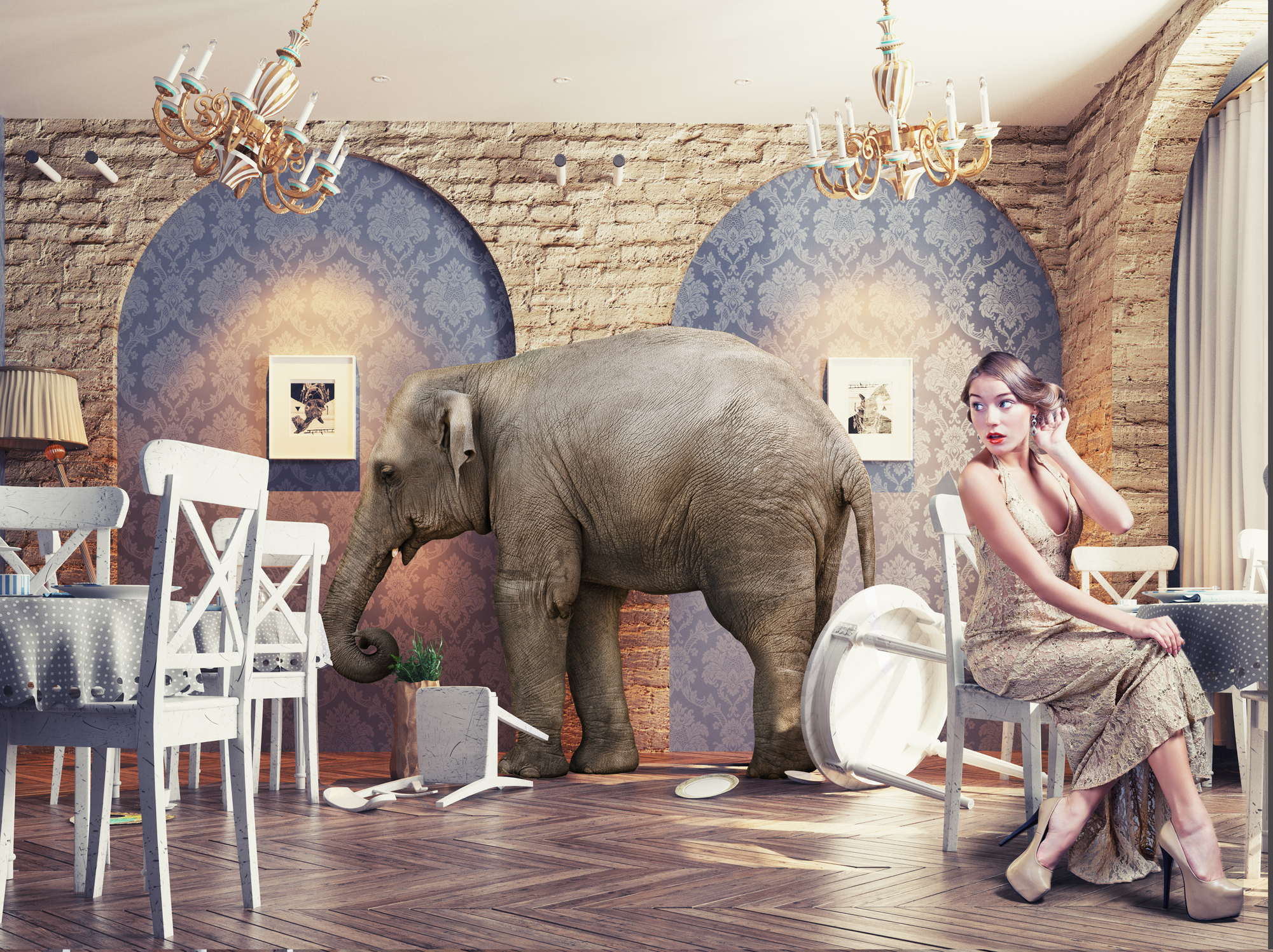 How things have changed! The Covid “room” was once filled with white coats and blue suits, all advocating for stringent measures to fight a novel coronavirus: compulsory masks, social distancing, house arrest, punitive fines, devastating lockdowns and mandatory vaccines to eliminate the perceived threat of mass infection. And there was always space for more politicians, medical officers, presumed “experts” and media personnel to convene, often unmasked and in close proximity to one another. No longer.

The Covid “room” now seems to have shrunk, having become almost too small to accommodate a growing herd of elephants. An elephant in the room is often sufficient to damage a consensus. But by my count, there are at least eight elephants in the room trumpeting their inconvenient truths, all jostling for space, gradually crowding the previous occupants into the corners.

Elephant 1: According to the World Health Organization, no friend of skeptics, the mean Covid infection fatality rate (IFR) seems close to statistically insignificant, rounding to a figure of 0.20 percent. As the paper concludes, “Most locations probably have an infection fatality rate less than 0.20 percent.” The figure is confirmed by the Yale BMJ survey, which concludes: “The IFR of Covid-19 in community-dwelling elderly people is lower than previously reported. Very low IFRs were confirmed in the youngest populations.” Indeed, “younger age strata had low IFR values (median 0.0027 percent).” Similar values have been reported on many other sites and exposés, demolishing the Big Lie marshalled to terrify a population into submission to the administrative state. 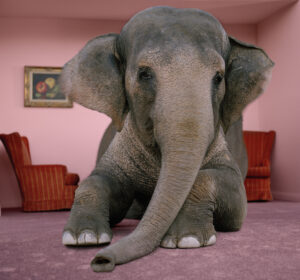 Elephant 2: It turns out that domestic pets, mainly cats and dogs—though I have met domesticated ferrets on leashes or poking their noses out of jacket pockets—are virus shedders. Over the last few years my wife and I have lived in different parts of Vancouver, which by my lights may be the most animal friendly city in the world. On our many walks and outings, we have met innumerable masked people strolling with their unmasked dogs—some wheeling their cats in baby carriages—exploding the fable they have been living by.

Admittedly, the consensus is that animals were first infected by humans and then transmitted the virus back, though the trajectory seems on the face of it rather hard to prove. Denmark slaughtered 17 million infected minks; should cat and dog lovers do the same to their cherished pets? Or should animals be masked and social-distanced? I suspect that would be a bridge too far for pet owners who have no compunction applying the same regime to themselves and their fellow humans. As my U.K. research colleague Martin Parker (to whom I owe the impetus for this article) points out, the animal reservoir alone puts paid to the fantasy of Covid-zero.

Elephant 3: Israel, which many regard as the vanguard and petri dish of escalating Covid policy. Over 80 percent and rising of the population have received the staple two shots and over half the population have received the third booster; yet Israel is experiencing a dramatic surge in cases and deaths. Many excuses have been offered for this failure: easing restrictions too early, insufficient interest among the Haredim and Muslim communities, not enough booster shots—the list goes on. But there is no doubt that vaccine effectiveness wanes within months (always assuming that the vaccines were truly effective to begin with). Indeed, the majority of internet sites and official venues do not even trouble themselves with alibis but herald a magnificent success. The vaccines work, even if they don’t.

Elephant 4: Sweden. The country did not lock down, did not require masking, did not close the schools, and allowed most businesses to remain open. Vaccines are available on a voluntary basis. Despite the lies and dire predictions of Sweden’s virtual destruction, the country has prospered relative to others; even the BBC has had to admit, grudgingly, that Sweden has fared better than other countries. As Jeffrey Tucker shows in Liberty or Lockdown, Sweden’s  comparatively favorable results came about “because it refused to violate human rights.” 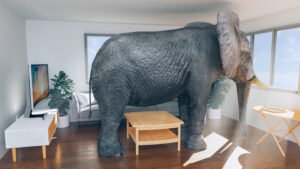 Looking for a way out.

Elephant 5: It is now known that natural immunity is a better option than vaccine immunity. Vaccinated people may pose as great or greater a risk to society via transmission as do the unvaccinated. A Johns Hopkins University study of July 31, 2021 states: Vaccinated and unvaccinated individuals have similar viral loads in communities with a high prevalence of the SARS-CoV-2 delta variant. Owing to robust natural immunity, people who recover from Covid are significantly less likely to transmit the virus than those who have submitted to the jab. The Lancet finds “no correlation between vaccine-induced neutralizing antibody levels and viral loads or the development of symptoms.” As Grant Brown explains in an important C2C essay, we cannot inject our way out of this pandemic.

Elephant 6: Vaccine Adverse Events. There is growing anxiety among accredited health professionals and ordinary people that the vaccines generate serious side-effects that equal or outweigh their putative benefits. Passive reporting sites like VAERS in the U.S. and Yellow Card in the U.K. do not tell the whole story, recording only a small fraction, perhaps as little as 1 percent, of vaccine-caused infirmities and deaths. The real count is much disputed but appears to be unacceptably high. An encyclopedic volume by Peter and Ginger Breggin, Covid-19 and the Global Predators, presents a list of official government and medical sources attesting to the hazard, which can be dismissed only at our peril.

Elephant 7: Social collapse. The virtual destruction of the global economy; the disruption of supply chains; the casting of untold millions into poverty and solitude; the irruption of stagflation; the dismantling of the middle class and the annihilation of small business, throwing hundreds of thousands into bankruptcy, accompanied by “the greatest upward wealth transfer in modern history”; the demolition of Charter and Constitution, including the suspension of due process, the right of assembly and freedom of worship; the censorship of information; the establishment of a health cartel determining what is permitted and what is forbidden; the shuttering of schools and sequestering of children, depriving them of their pivotal formative years and blighting their future development; the mounting number of “excess deaths” owing to stress, depression, suicide and prolonged deferment of critical medical procedures, arguably eclipsing the Covid morbidity rate—all such factors lead to the stark conclusion that the orchestrated response to the virus was likely degrees of magnitude worse than the disease itself. 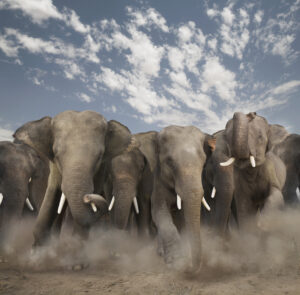 Ready or not, here they come!

Elephant 8: Vaxxports, the political mammoth of the herd. The Canadian edition of The Epoch Times observes that “Vaccine passports mandated by governments will create a highly intrusive surveillance system” that can force citizens “to reveal their health information but can also track their whereabouts.” Dr. Ann Cavoukian, former Ontario Information and Privacy Commissioner and currently executive director of the Global Privacy and Security by Design Centre, worries that an individual’s driver’s licence, phone number and other personal information will be on record, establishing a “global infrastructure of surveillance,” in effect, the Covid State.

Of course, this is not just a Canadian instance of surveillance monitoring, but applies across the board to all Vaxxport nations. Similarly, The Sociable warns that “Covid passport mandates are fueling authoritarian social credit systems, digital identity schemes,” on the Chinese model—what is known as “corporate communism.” When one’s privacy is invaded, one’s most valuable “property” is compromised: one’s selfhood. Creating a system of medical apartheid and political oppression, the vaccine passport is the ticket to a totalitarian state.

It is true that elephants are an endangered species, no less so in the savannas of progressivist ideology and medical demagoguery. But when elephants congregate in the room, they claim a lot of space, carry considerable weight and do not consort agreeably with their adversaries. Admittedly, one must avoid the ingestion of hopium, an opioid that can enfeeble the will to act and ride the elephant. But things do change, and when the elephants finally emerge from the room, it may be triumphally and with much trumpeting.