'What an Artist Dies in Me!' 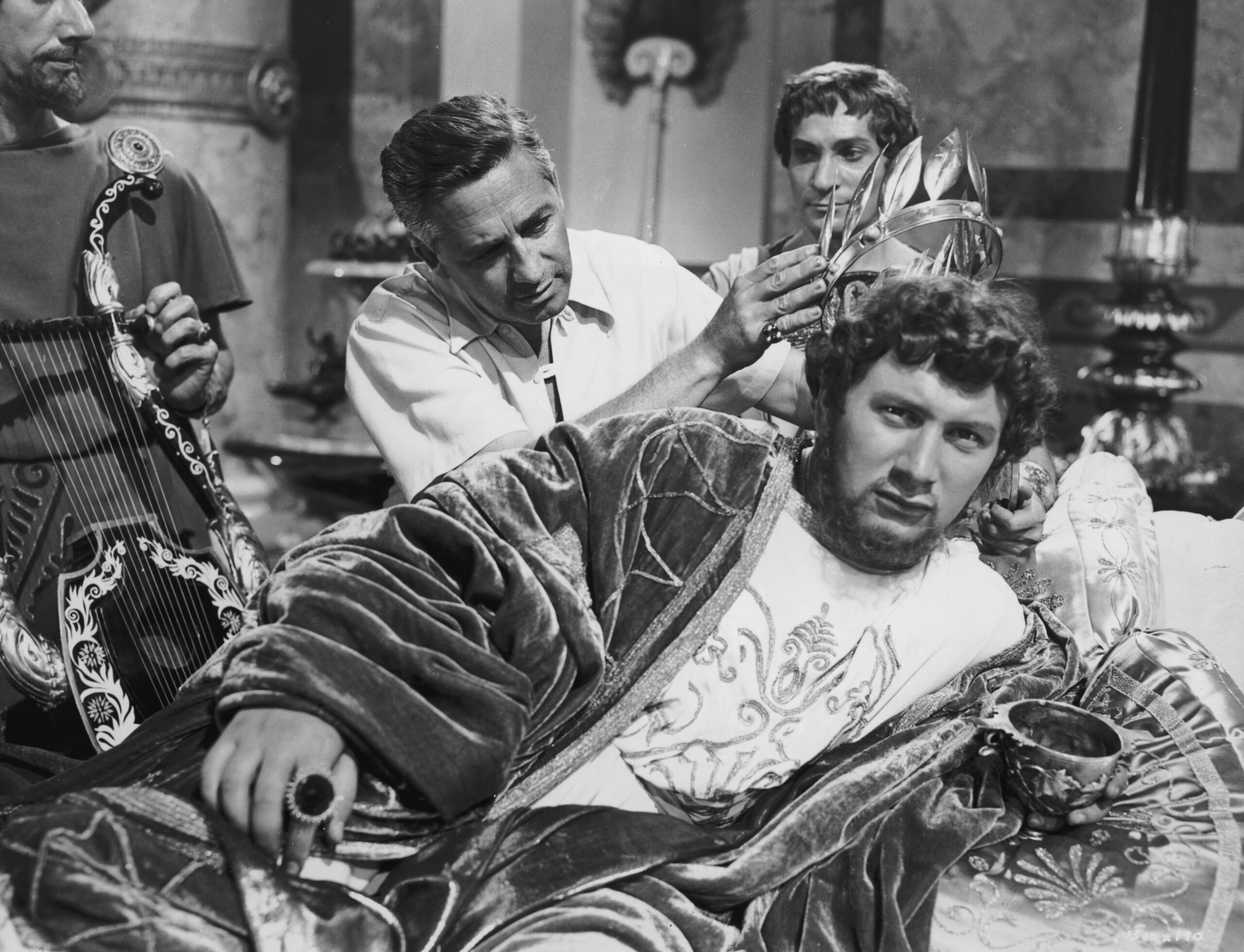 This week, the-Pipeline.org has published the first of what we plan as a series of timely but well-considered "Againsts"  concerning various aspects of the current crisis: Against the Great Reset, published by Bombardier Books in cooperation with Simon and Schuster. Edited by myself, the roster of writers includes Michael Anton, Salvatore Babones, Conrad Black, Jeremy Black, Angelo Codevilla, Janice Fiamengo, Richard Fernandez, David P. Goldman, Victor Davis Hanson, Martin Hutchinson, Roger Kimball, Alberto Mingardi, Douglas Murray, James Poulos, Harry Stein, and John Tierney. What follows here is a brief excerpt from my essay, the final one of the book, "What an Artist Dies in Me!"

Or so the Emperor Nero was supposed to have said, just before one of his freedmen helped him drive a dagger through his throat in the year 68 A.D. Too afraid to die a noble Roman by his own hand, declared a public enemy by the Senate, his castrated transsexual catamite, Sporus, by his side, the last of the Julio-Claudians went to Hades piteously declaiming what a loss to the world his death would be.

We remember Nero today primarily as the man who fiddled, or rather played upon the lyre and sang, while Rome burned as he pondered some architectural improvements. As the man who murdered his own mother (Agrippina the Younger, the model for all scheming momsters), as well as two of his wives—Octavia, the daughter of Emperor Claudius, and the pregnant Poppaea, who formerly had been married to one of his closest friends, Otho, who later briefly succeeded him as emperor. And as the man who threw the early Christians to the lions, when he wasn’t covering them in pitch and setting them ablaze as human torches, according to some hostile accounts. 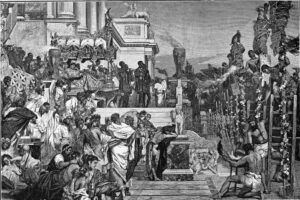 But we remember him still, despite his notorious reputation as a sexual deviant, even by Roman standards, a matricide, an uxoricide, and the unworthiest descendant of the line of Mark Antony and Germanicus, a category that also includes the stiff competition of Caligula. He considered himself, however, a great poet, musician, singer, and actor, who spent much of the period 66–67 A.D. in Greece, where he competed in the Olympic Games as both an actor and a charioteer. And his last words, more poignant and delusional than most, tell us how he saw himself. He was not just the emperor, a demigod, and the absolute monarch of a still-expanding empire: he was a bard and a singer.

The nexus among art, religion, and power is an ancient one, dating back to the wellsprings of humanity. To the seer and the shaman were given tribal standing; the man of insight and ability won leadership. The talent to conceive and draw big game on the walls of caves—three-dimensional objects in two-dimensional space—was tantamount to summoning them to the slaughter. To evoke the as-yet-unborn Schopenhauer, the world was both will and representation, and it would take millennia of scientific and philosophical advancement to try—imperfectly—to separate them.

The path from reification to the middle step of representation—objectification—led, perhaps paradoxically in the eyes of modern “feminists,” to more abstract concepts of beauty, with their attendant webs of nuance, recollections, desires, hopes, dreams. Writing in his book, Beauty, the late Sir Roger Scruton noted, “Metaphors make connections which are not contained in the fabric of reality but created by our own associative powers. The important question about a metaphor is not what property it stands for, but what experience it suggests.”

This was the next step in the creation of art (throughout this essay, I will be using the term “art” to encompass all the arts, not simply painting and sculpture), because at root, art is about beauty and nothing but beauty. No matter how brutal the art may be, how coarse and even nihilistic, beauty in a free society is always present by its absence, the standard against which the emptiness of evil is measured. The corruption of art is therefore an act of the purest evil. Small wonder that totalitarian movements such as the Great Reset fear its power and must co-opt and destroy its independence.

The Greeks had Mount Parnassus, sacred to both Apollo and Dionysus and their attendant arts, and perhaps the home of the Muses as well. Later, pedagogues developed the notion of the Gradus ad Parnassum, denoting the steps to mastery novices must take as they ascend to the peak of artistic attainment. And, as noted in my Introduction, the great German novelist Thomas Mann synthesized these themes and many more in 1924 his masterpiece, The Magic Mountain—located, as fate would have it, in Davos, Switzerland, in the heart of the Swiss Alps, which also happens to be the locus of the World Economic Forum’s annual celebration of obscene wealth and unbounded ambition—a fitting locale for our latter-day emperors.

However, instead of encountering Mann’s indelible cast of characters at the Berghof sanatorium—the scalding intellectual Naphta; the rationalist, secular freemason Settembrini; the seductive hot kitten, Clawdia Chauchat of the Kirghiz eyes; and the despotically exotic Mynheer Peeperkorn—we find waiting for us instead the clinical dispassion of Klaus Schwab, as Teutonic in mien and accent as the character of Dr. Szell in Marathon Man. We half expect him to ask us, “Is it safe?”

In the year 1643, in France, the Sun King assumed the throne. The Age of Exploration was well underway. The English civil war raged. The Thirty Years’ War was nearing an end. And in the sovereign state of Venice, La Serenissima, the Italian composer Claudio Monteverdi premiered the last of his works in a new art form called, fittingly, opera (works). Its name: L’incoronazione di Poppea. Its main characters: the beautiful Poppaea Sabina, soon to be called the Augusta, whose favorite saying was that she hoped she would die before she got old; and the man born Lucius Domitius Ahenobarbus and ended up as Nero Claudius Caesar Augustus Germanicus—or, simply, Nero.

Its final, ravishing duet, “Pur ti miro” (“I adore you, I embrace you, I desire you”), Poppea and Nerone (performed today by a woman or a countertenor, castrati being largely unavailable, except among the progressive gender dysphorics) sing of their undying love. No matter that Nero has killed his mother and made his marriage to Poppaea possible by eliminating the prior Mrs. Nero, Claudia Octavia. No matter that we know the marriage will last only three years, when Nero will kick Poppaea and her unborn child to death in a fit of pique, and then marry again, taking not only Statilia Messalina to wife but an emasculated boy made up to look, and function, exactly like the dead Poppaea.

We know the tragic ending but they don’t—and it doesn’t matter. In this radiant moment, one of history’s greatest monsters is resurrected as a lovesick hero, transformed not by dramatic fiat but by the otherworldly power of Monteverdi’s music, which makes us forget history and be carried along by an alternate reality we briefly prefer to believe. The artist Nero fancied himself is thus given immortality—but not absolution—in the field in which he most desired it.

Art, like the Christ figure, has conquered death. This is its power, which cannot be reset. This is why religious and secular authorities fear it, seek to diminish it, try to co-opt it, reduce it to a grubby economic transaction, send it to a prison camp, hang it. Like Boccaccio’s Decameronians, holed up in a fashionable villa to avoid the Black Death but with absolutely no storytelling ability, they await and encourage the collapse of contemporary civilization so that they might improve it, along with their own fortunes. That artists subscribe, consciously or not, to the Nietzschean doctrine of eternal recurrence never seems to occur to them; even if they’ve never read Cloud Atlas, perhaps they should harken to the sextet by Vyvyan Ayrs.

Artists neither mourn nor celebrate their subjects; rather, they exhibit their own power to resurrect the dead or summon the nonexistent to squalling life, whether their characters are sacred or profane. Profoundly indifferent to morality, yet completely human, art exists on its own terms, open to all to inspect, embrace, imitate, or reject. From the Roman Empire to the seventeenth-century Venetian court; from the Zauberberg a hundred years ago to Davos Dorf today, many have tried to geld it or beat it into submission, but art and artists will always have the last word. There is no Reset, neither by gods nor bonzes, but there is always rebirth. And that is forever the province of the glory, jest, and riddle of the world—Man.