The World Turns on 'Davos Man'

Perhaps the surest sign the bloom is coming off the Great Reset is that progressives are turning against what is now disparagingly referred to as the 'Davos Man'. Rather than lionizing the attendees of the annual World Economic Forum as enlightened billionaires eager to save the world, as was formerly the case, New York Times economics correspondent Peter S. Goodman's new book depicts them as profit-seeking wolves disguised under the sheep's clothing of virtue. In this telling, rather than using the Covid-19 pandemic as an occasion to reform and heal the world, the very crowd behind the Great Reset used the opportunity to loot it.

The New York Times cites the case of Marc Benioff, founder, chairman and CEO of Salesforce, as an example of a Davos Man whose fortune exploded during the pandemic. "The lockdowns were adding to his wealth — estimated at more than $10 billion — as his company, Salesforce, tallied record sales of software that allowed people to work from anywhere. ... And the ordeal was affirming a faith that Mr. Benioff had been preaching for decades: that business leaders were the ultimate guardians of human progress." Now the Left doesn't share that conviction any longer. Why the sudden falling out? As Vanity Fair points out, the "billionaire circus in Davos" has been running for decades without a hiccup.

What changed was on the outside, the Great Disappointment, compounded of the failure of the elites to end the pandemic, tame inflation, stave off energy shortages and prevent international military tension -- despite all the emergency powers they gathered unto themselves. A global backlash against elite rule has begun. Faced by failure everywhere and cascading protest, an effort  to escape consequences has begun. The Left says they're not to blame for Biden's problems and as Matthew Continetti notes, Goodman's book in deconstructing Davos finds only the 'private' part of public-private shareholder capitalism is to blame.

The book is a master’s course in selective indignation. In this telling, public-sector failure doesn’t exist. Every ill is the fault of the private sector. Debtors have no agency, creditors do. Davos Man can’t catch a break: According to Mr. Goodman, Amazon’s wage hike in the spring of 2021 didn’t really count as a raise because it was done “more as a way to harm competitors than to redress unfair treatment.” One prominent Davos Man, liberal hedge-fund billionaire George Soros, appears only briefly in the narrative. Mr. Goodman identifies him as “the financial trader and democracy advocate.” Then there is Mexican billionaire Carlos Slim. Government connections made him one of the world’s wealthiest men. At one point, he was the single-largest individual shareholder in Mr. Goodman’s paper. He doesn’t appear at all.

But finger pointing is not enough to ward off impending disaster for the public-sector progressives. Christopher Caldwell also writing in the New York Times, says not just Joe Biden but the Democratic Party is experiencing "one of the most drastic reversals of party fortune that Gallup has ever recorded." At the heart of the catastrophe is the failure of their attempt to "go big" and sell "a story about America — about the depth and pervasiveness of racism — about the depth and pervasiveness of racism, and about the existential dangers of Mr. Trump — that a great many Americans, even a great many would-be Democrats, do not buy." In other words it is a comprehensive rejection.  The pandemic years, rather than providing a triumphant opportunity to remake the world, has proved instead a debacle for the nomenklatura unseen since the fall of the Soviet Union. 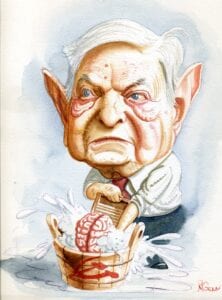 Did somebody say György Schwartz?

Nothing exemplifies this reversal of fortune more dramatically than events in Canada, where a massive convoy of trucks materialized seemingly out of political nowhere to challenge everything. It is the gigantic, vague, and leaderless character of the current political protest in the West that has pundits on edge. They don't know what to make of it -- they're not even sure what "it" is. Facile conspiracy theories cannot explain "it"; and although there are personalities associated with recent events, the personalities did not create or lead it. They too are hanging on in suspense, awaiting developments.

There is disquiet abroad in the world, and it is not the spirit of the elite-led Great Reset, rather something emergent and distinctly different. Who knows what it is? Chinese President Xi Jinping, like Justin Trudeau, has all but vanished:

... hunkering down in Beijing for more than 700 days. Xi’s disappearing act is occurring at the same time he and the Chinese Communist Party (CCP) face serious domestic headwinds, including rampant energy shortages, rising unemployment, and a real estate market teetering on the edge of collapse. Times have clearly changed since before the Covid-19 pandemic... if Xi’s latest pronouncements are any indication, there is something else keeping him awake at night: growing fears about resistance to his rule from factions inside the CCP.

There might be more out there keeping Xi and other leaders awake at night beyond the mere fear of internal dissension, though its features as yet cannot be clearly made out. Perhaps it will turn out to be the awaited Great Reset after all, but not the version the organizers of the World Economic Forum expected but something altogether different; and it will have come from other aspirations and towns than a small resort village in Switzerland.

2 comments on “The World Turns on 'Davos Man'”