THE COLUMN: Why Are We In Ukraine? 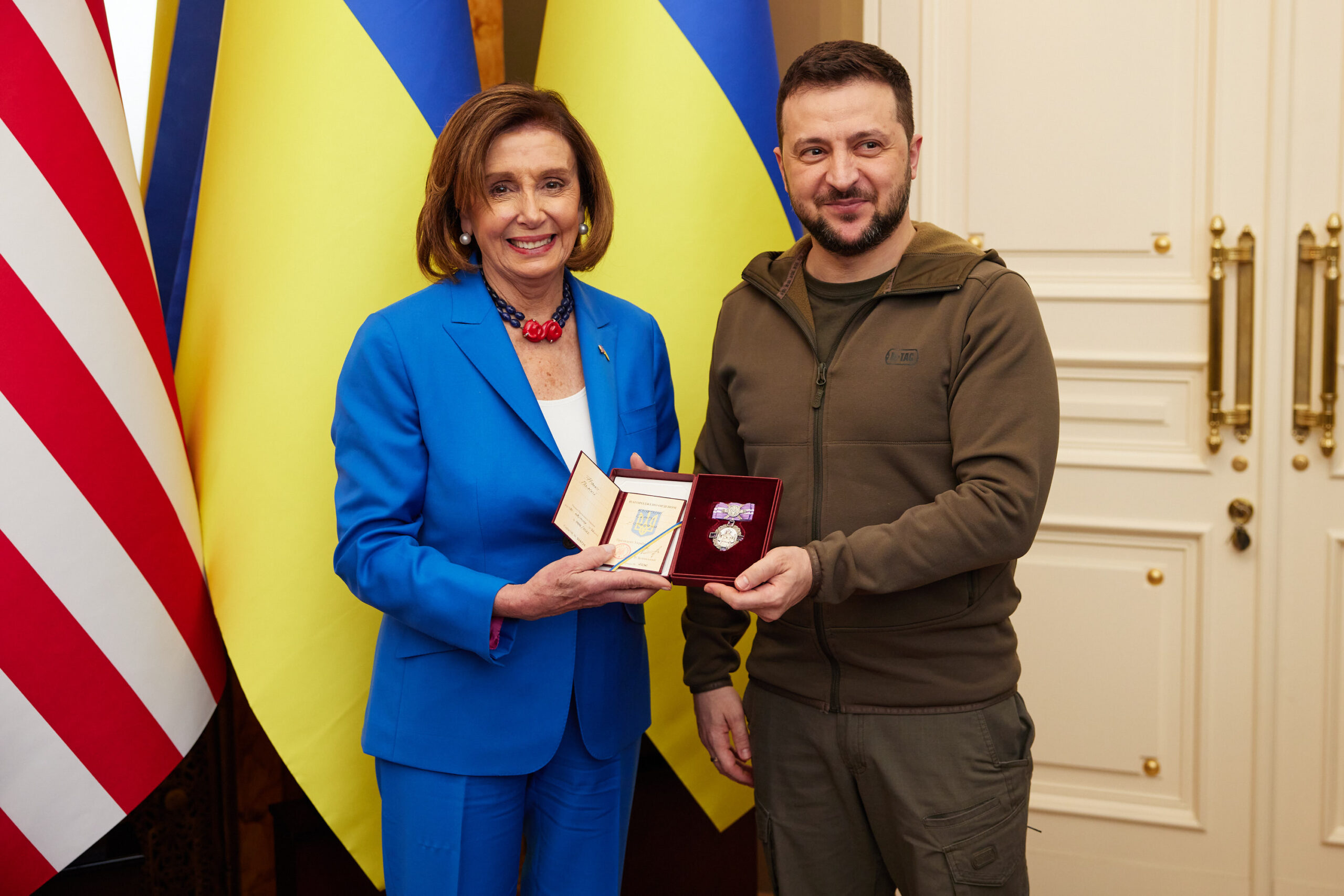 By now, it's a commonplace to observe that, in accordance with Conquest's Third Law of Politics, our country is ruled by a cabal of her enemies. The brief Trump interregnum between 24 years of Clinton/Bush/Obama—in retrospect, nearly indistinguishable in the havoc each wreaked on the United States—and now the first term of Joseph Robinette Biden, Jr., is barely a blip on the radar screen of Progressivism. As Mark Antony observes during Caesar's funeral oration: “The evil that men do lives after them; the good is oft interred with their bones.” Welcome to the boneyard of America.

This is, alas, true regardless of whether the men themselves were of good character. Clinton wasn't, Bush more or less was, Obama isn't, and Biden is one of the worst men ever to assume the presidency: a bully, a liar, a plagiarist, a mediocrity and, at this stage of his senescence, a clear and present danger. As for Trump, no one ever mistook him for a secular saint, and indeed he was brought down and done in by his own manifest personal imperfections, poor personnel choices, and chronic inability to control his self-destructive solipsistic nature. But in Trump's case the good he did has already been interred with the bones of his presidency, and we are now left at the mercy of a vengeful Permanent Bipartisan Fusion Party determined to bring us to heel and ruination.

Case in point: the Ukraine. Back in 1965, an accidental president, Lyndon Baines Johnson, hit upon the brilliant idea of fully involving the U.S. in a pointless war in Vietnam and southeast Asia. Nobody wanted this war. "I ain't got no quarrel with them Viet Cong," observed Muhammad Ali around that time, upon learning that his vengeful draft board had just reclassified the heavyweight champion of the world from 1-Y (qualified for service only in time of war or national emergency) to 1-A. Most Americans agreed with him. LBJ, however, didn't care. We had to save Asian boys from the consequences of their imported Gallic laziness and martial impotence.

What a steaming pile of Texas codswallop that was, and even those of us who were in high school at the time knew it. But thus began the Forever Wars, the latest incarnation of which is currently being held in Kiev, Ukraine, formerly the Ukrainian Soviet Socialist Republic. Although it's in a war zone, the manifest lack of danger to visiting American politicians and aging rock stars is quite obvious, as Jill Biden, Nancy Pelosi, and even Mitch McConnell have all showed up in party attire to what's supposed to be a live-fire zone, to take in the sights and perhaps enjoy a few golden oldies. Cui bono, or should I say cui Bono? As the playwright David Mamet notes in his new book, Recessional: The Death of Free Speech and the Cost of a Free Lunch: "When all politicians are agreed, someone is getting bought off."

This would be the same Ukraine whose dirty fingerprints are all over every significant scandal of the past several years, including the odiferous Burisma deal with the Biden family, as well as various electoral shenanigans in which prominent members of the amoral establishment political-consulting class have been involved up to their eyeballs, including David "Jake Lingle" Axelrod, Steve Schmidt, Mark Penn, Paul Begala, and Paul Manafort. As U.S. News noted in 2014:

Manafort isn’t alone in plying his trade in the former Soviet republic; as the Times noted in 2007, former Bill Clinton pollster Stan Greenberg was working for Ukraine’s then-president, Viktor Yushchenko, as were GOP operatives Steve Schmidt and Neil Newhouse. By the 2010 presidential campaign, the Times reported, Yuschenko had retained another former Clinton strategist, Mark Penn, while then-Prime Minister Yulia Tymoshenko had hired David Axelrod’s old firm, AKPD Media. (It’s a small world after all: Schmidt would go on to manage John McCain’s 2008 presidential campaign against AKPD client Barack Obama; Newhouse would in 2012 poll for long-time client Mitt Romney in his presidential bid.)

The U.S.-Ukraine political nexus hasn’t just involved campaign work. As Reuters’ Mark Hosenball and Warren Strobel reported last December, the European Centre for a Modern Ukraine, “a Brussels-based organization sympathetic to [Yanukovych] and his political party” had paid nearly $1.5 million over the preceding two years to the firms of lobbying heavyweights like Republican former Reps. Vin Weber and Billy Tauzin and Democrat Anthony Podesta (whose brother John is a senior counselor in the White House). Where the Centre gets its funding is unclear, Reuters reported: “In a filing with the European Union, the group listed its budget for the financial year ending in November as 10,000 euros, or about $14,000 – a fraction of the $1.46 million it paid the Washington lobbyists.”

It's also the birthplace of Alexander Vindman, the professional rat fink who was one of the central figures in the bogus first impeachment of Donald Trump, which was occasioned by Trump's raising the issue of the Biden family's involvement in the Ukrainian financial sewer system:

I was a 44-year-old U.S. Army lieutenant colonel assigned to a position equivalent to that of a two-star general, three levels above my rank. Since July 2018, I’d been at the National Security Council, serving as the director for Eastern Europe, the Caucasus, and Russia. Recently, deep concerns had been growing throughout the U.S. foreign-policy community regarding two of the countries I was responsible for. We’d long been confused by the president’s policy of accommodation and appeasement toward Russia. But now there were new, rapidly emerging worries. This time the issue was the president’s inexplicable hostility toward a U.S. partner crucial to our Russia strategy: Ukraine.

"Our" Russia strategy"? Easy enough for a guy born in Kiev to say. And "inexplicable" only if you're rooting for the other side. But if like all of the Democrats and at least half the Republicans in Congress you're on the bipartisan team Gravy Train, elbow deep in the one supply chain—the military-industrial complex's arms-procurement racket— that's working just fine, you're sitting pretty while real Americans suffer. After all, nothing's too good for keyboard whiz Volodymyr Zelensky and Plucky Little Ukraine, so the hell with your baby formula.

True, the latest money-laundering bill to emerge from Maerose Prizzi and Yertle the Turtle's congress is temporarily on hold because that skunk at the garden party, Rand Paul, refused to make unanimous this latest looting of the American treasury:

Kentucky Republican Sen. Rand Paul defied leaders of both parties Thursday and delayed until next week Senate approval of an additional $40 billion to help Ukraine and its allies withstand Russia's three-month old invasion. With the Senate poised to debate and vote on the package of military and economic aid, Paul denied leaders the unanimous agreement they needed to proceed. The bipartisan measure, backed by President Joe Biden, underscores U.S. determination to reinforce its support for Ukraine's outnumbered forces.

The legislation has been approved overwhelmingly by the House and has strong bipartisan support in the Senate. Final passage is not in doubt.

Of course it's not. Why would it be? From LBJ's Vietnam to Bush pere et fils' unfathomable obsession with Iraq and Afghanistan, to the Establishment's newfound fealty to the Ukraine and its roundheeled banks and politicians, and their proxy war with Russia, Americans of my generation have hardly known a moment's peace. And for what? No bono here: the nation's economy is shot, its infrastructure's a joke, its military can't fight, its police are hamstrung in the face of decriminalized crime, its institutions are all under assault by the demon spawn of the Frankfurt School, and its domestic tranquility has been torn asunder.

Instead of listening to Johnson, we should have listened to a far greater president, the man who won the war in Europe, and one of the finest military/logistical minds this country has ever produced. Naturally, in his day, he was scorned by the Democrats as "stupid" and "inarticulate," just as pretty much every Republican president elected since has been. But hear him out:

All class, and not bad from a poor kid from Abilene, Kansas. Ike's gift was a clear-eyed assessment of reality, an understanding of his enemies, and the willpower to get the job done. He, better than most of his contemporaries, grasped the rapid increase in technological change and its unholy partnership with the federal government occasioned by World War II. "Today, the solitary inventor, tinkering in his shop, has been overshadowed by task forces of scientists in laboratories and testing fields." But even with (and perhaps due to) his long years of military service, beginning at West Point and ending as Commander-in-Chief, he was under no illusions about the dangers of such a partnership ahead:

A vital element in keeping the peace is our military establishment. Our arms must be mighty, ready for instant action, so that no potential aggressor may be tempted to risk his own destruction... American makers of plowshares could, with time and as required, make swords as well. But now we can no longer risk emergency improvisation of national defense; we have been compelled to create a permanent armaments industry of vast proportions... This conjunction of an immense military establishment and a large arms industry is new in the American experience... Yet we must not fail to comprehend its grave implications....

In the councils of government, we must guard against the acquisition of unwarranted influence, whether sought or unsought, by the military-industrial complex. The potential for the disastrous rise of misplaced power exists and will persist. We must never let the weight of this combination endanger our liberties or democratic process. We should take nothing for granted. Only an alert and knowledgeable citizenry can compel the proper meshing of the huge industrial and military machinery of defense with our peaceful methods and goals, so that security and liberty may prosper together.

The ancient Romans had a stricture against keeping legions under arms in the Italian heartland. It was Caesar's defiance of this edict in 49 B.C. when he crossed the Rubicon with the Thirteenth Legion and headed for Rome, that ultimately spelled the end of the Republic and the descent into civil war. Now here we are, being driven toward war with Vladimir Putin's Russia by a relentless military-industrial propaganda campaign organized by a corrupt gerontocracy in command of our armed forces in support of a dubious cause, for absolutely no good reason of state.

What are we going to do about it?

11 comments on “THE COLUMN: Why Are We In Ukraine?”