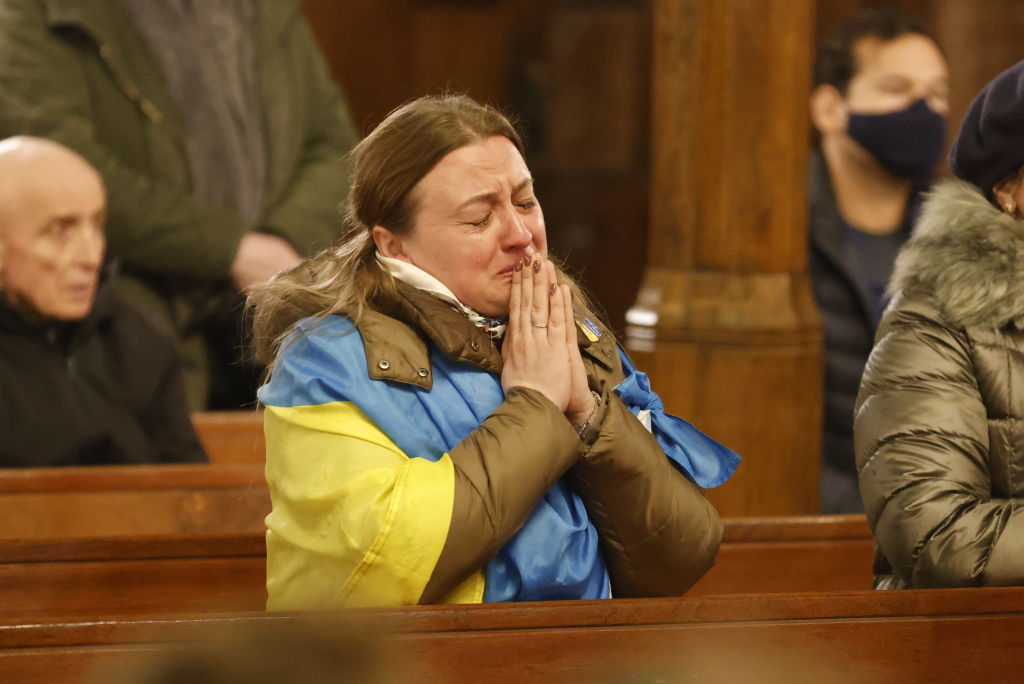 And so, just like that, Covid hysteria has suddenly receded, the manifest limitations of "green energy" have revealed themselves, and "gun control" suddenly doesn't seem so urgent in light of plucky little Ukraine's citizen-soldiers. Inflation is soaring, pocketbook issues are back on the table, and the outbreak of a real shooting war in the Ukraine, in which people are fighting and dying, has suddenly yanked the word "catastrophic" back from the realm of mental illness and into reality. As the late British prime minister Harold Macmillan is supposed to have replied when asked what was his greatest challenge: "Events, dear boy, events."

Amazing what happens when reality bites. The small stuff, the transient concerns, the self-indulgence in lunacy and cultural suicide suddenly slips away, revealing bedrock truths beneath. The prolonged propaganda assault by the national media, led by the unabashedly racialist New York Times, on the traditions and institutions of this country has screeched to a halt as people stare in disbelief at supermarket receipts and gas pump prices and watch the shelling of Kiev on their televisions. Perhaps now words like "assault" and "hostile environment" won't be thrown around with such gay abandon:

So much for the dreaded "assault" rifles, which now seem to have some usefulness after all. Note as well that these "assault" rifles aren't firing themselves, but are instead wielded by responsible adults in an actual hostile environment in defense of their lives, their families, and their homelands—exactly the conditions under which the Congress and the several states ratified the second amendment.

Vladimir Putin's aims have been clear for decades to anyone who knew anything about Russian history. Raised in the Soviet Union, he regarded the collapse of his country as a great tragedy, but he is not trying to restore anything like the U.S.S.R. Rather, his ambition is to reanimate the Rodina of Tsar Alexander, the scourge of Napoleon who also played a large part in the formation of modern Europe at the Congress of Vienna. To that end, he has cemented an alliance with the Russian Orthodox Church—the historic soul and animating spirit of the country—which forms, along with the coterie of gangsters that emerged from the ruins of the KGB, his power base.

He's long had his eyes on Kiev, in many ways the heart of Mother Russia but unfortunately for him occupied by his Slavic cousins, the Ukrainians who, having experienced the Soviet Union, have little desire to re-unite. Like Poland, Ukraine lives in a bad neighborhood between two ugly neighbors, Germany and Russia , one in which the borders keep switching around. But the foolish American notion of pushing the moribund corpse of NATO eastward, into Albania, Bulgaria, and the Baltics has been seen by Putin and the Russians as both a humiliation and a provocation.

"Climate change," too, has been back-benched for a while. Not a peep out of the usual suspects complaining about all the carbon emissions from the land and air power unleashed on the Ukraine by Putin and the sorry shambles of the once-formidable Red Army as their genuine assault on a neighboring sovereign nation has seemed to sputter. But never fear, intrepid eco-warriors such as John "Mr. 16 Weeks in Nam" Kerry, who racked up more medals-per-hour than Audie Murphy, are here to keep the focus where it belongs:

John Kerry: “I hope that President Putin will help us stay on track with respect to what we need to do for the climate.”pic.twitter.com/uAEkSeqvpj

And to think that this man was almost president of the United States. Then again, an even bigger fool currently sits in the Oval Office. Like Kerry, Joe Biden is a lifelong government functionary with no real-world experience but a huge chip on his shoulder over what he perceives as non-recognition of his genius. Biden is that Irish archetype, the braggart on the far barstool mouthing off and trying to provoke the real men of the community into taking a poke at him. The more they ignore him, the angrier he gets. Until reality slaps him in the face.

What is Biden to make, then, of his abysmal approval ratings, his demolition of the American economy in order to satisfy his "green" saboteur/enablers, and his consummate ineptitude at handling the levers of government except signing "executive orders" shoved under this nose by chief of staff Ron Klain. With his first act in office, the cancellation of the Keystone XL pipeline, Biden suddenly threw the booming Trump economy into reverse without even hitting the clutch, causing the engine to conk out. By choking off energy supplies—the lifeblood of the economy—in order to appease the Luddite god of the malevolent Greens, Biden has now been reduced to begging other countries, including Russia, into selling us oil. How's that for diplomacy?

All but the most demented Democrats, however, hate personal privation, so now of course there are calls to restart the pipeline again. Forget the former fretting over the environment and "public health"—the all-purpose excuse for punitive fascism these days. Ah, but how some outfit calling itself the "Natural Resources Defense Council" crowed just thirteen months ago:

The takedown of the notorious Keystone XL (KXL) tar sands pipeline will go down as one of this generation’s most monumental environmental victories. After more than 10 years of tenacious protests, drawn-out legal battles, and flip-flopping executive orders spanning three presidential administrations, the Keystone XL pipeline is now gone for good. The project’s corporate backer—the Canadian energy infrastructure company TC Energy—officially abandoned the project in June 2021 following President Joe Biden’s denial of a key permit on his first day in office. But the path to victory wasn’t always clear.

Many had hoped that the disastrous project was finally done for in November 2015, when the Obama administration vetoed the pipeline—acknowledging its pervasive threats to climate, ecosystems, drinking water sources, and public health. But immediately after taking office, President Donald Trump brought the zombie project back to life, along with the legal battles against it. By the time President Biden took office in 2021, ready to fulfill his campaign promise to revoke the cross-border permit, the dirty energy pipeline had become one of the foremost climate controversies of our time.

That was then, this is now:

A spokesperson for Montana’s other U.S. senator, Jon Tester (D-Montana), said, “Senator Tester was Montana’s leading champion for the Keystone Pipeline for more than a decade, and he was bitterly disappointed when the project was canceled. Senator Tester will continue to work aggressively to support responsible natural resource development that will create good-paying Montana jobs, secure our energy independence, and defend our national security.”

This push from Daines comes as oil prices jumped to $100 a barrel this week, as tensions escalate between Russia and Ukraine.

Which brings us to the latest, highly politicized "thinking" on the Left regarding the prolonged and by now thoroughly tiresome Covid hoax. Via the power of the media, a standard coronavirus (akin to the flu) with a 99 percent survival rate, and which claimed the majority of its victims from the ranks of the elderly and the morbidly obese, was transformed into the Black Death, and unleashed an army of meddlesome, fearful Karens upon the nation. Now that the transparent falsity of the claims the government made for the virus and for the efficacy of the vaccines is beginning to sink in, suddenly the "science" is not so settled after all, and maybe it's time we—you guessed it—declared victory and pulled out.

Here is the literal memo to the Dems from Biden's polling firm. Declare a win over Covid and move on. I suspect CDC will get the memo. Will @GavinNewsom and @lapublichealth? We shall see. SOTU is Tuesday. pic.twitter.com/1Enk5SIITk

These are addressed to a man who just two months ago gleefully threatened a winter of "severe illness and death" on the unvaccinated. Instead, predictably, now that Heisenberg has left the building Covid has essentially vanished. But for the past two years, we had the luxury of obsessing about a passing illness that posed almost no danger to most of us, but did hand the government the tools to lock us down, create health passports, restrict the free movement of peoples, and abrogate the constitutional guarantees of freedom of speech, assembly, and religion.

And whaddya know? No more mask mandates on Capitol Hill for Brandon's big State of the Union speech tomorrow night!

The US Capitol's attending physician said Sunday that masks will be optional on Capitol Hill starting Monday, just a day before President Joe Biden will deliver his State of the Union address in the House chamber. Citing new guidance from US Centers for Disease Control and Prevention, Dr. Brian P. Monahan said in a memo that "individuals may choose to mask at any time, but it is no longer a requirement."

"New guidance." Thanks, but Real Americans have had just about enough of governmental "guidance." A bright shining lie, as I wrote in these pages not long ago. You know they're just itching to do it again, but we need to make one thing perfectly clear: no more "mandates," ever.

Even Saturday Night Live is making fun of them. So you know this prank is running out of steam.

"There is a great deal of ruin in a nation," observed Adam Smith in the 18th century. But how much ruin, exactly? Russia is testing that proposition now, and the United States under Biden is not far behind. Events, dear boy, events.