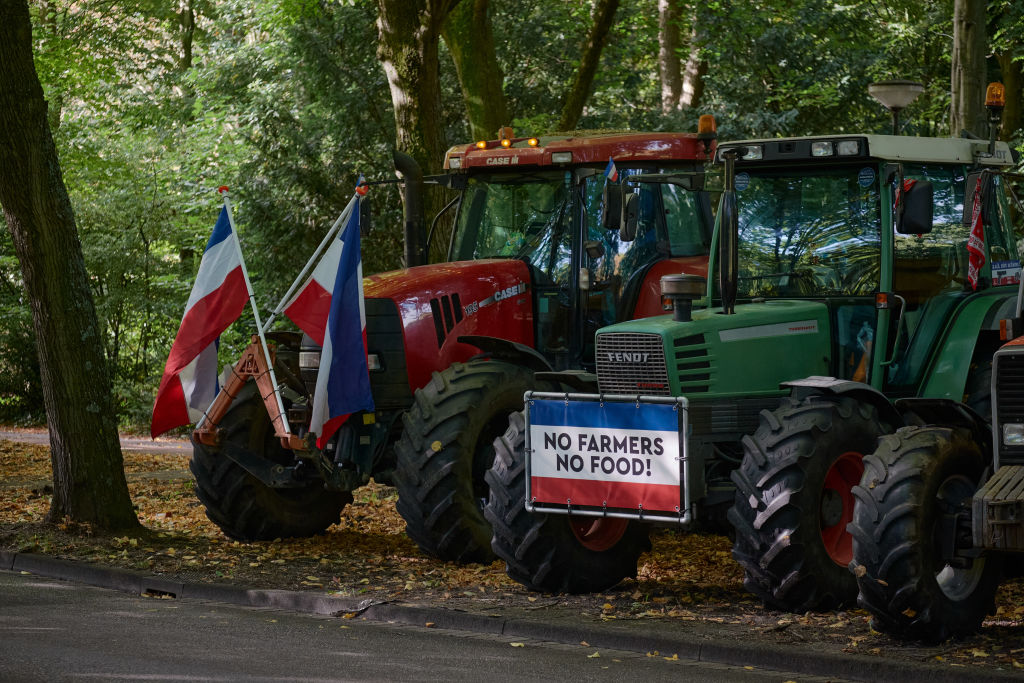 Farmers protesting their own government in the Hague.

This past summer we reported on the tensions between the farmers of the Netherlands and that nation's government. The latter, at the behest of the E.U., had enacted various overweening environmentalist regulations, including a plan to slash the emission of gases like nitrogen oxide and ammonia by 50 percent by the end of this decade. These regulations were aimed squarely at farming, which is a sizable portion of the Dutch economy. They've already implemented nitrogen licenses, which are required for any new activity -- including the expansion of existing farms -- which emit the gas, and are pushing significant livestock reductions.

Dutch farmers have been understandably upset at these impositions, feeling that their livelihood has been unjustly targeted. They've undertaken mass protests, including blocking agricultural distribution centers and dumping milk rather then sending it to market, to force the country to acknowledge what life without their produce is like. In rowdier moments they've even sprayed manure on highways and used tractors to "slow-walk" roads, leading recently to what The Telegraph referred to as "the worst rush hour in Dutch history with 700 miles of jams at its peak."

Unfortunately the government, led by Prime Minister Mark Rutte, has refused to change course. It has recently unveiled plans to "buy and close down up to 3,000 farms near environmentally sensitive areas." They insist that farmers will be well-remunerated, and unconfirmed reports suggest the government's purchase price will be around 120 percent of the value of the farms in question. One thing that is confirmed, however, is that they're not asking:

“There is no better offer coming,” Christianne van der Wal, nitrogen minister, told MPs on Friday. She said compulsory purchases would be made with “pain in the heart” if necessary.

It is worth pointing out the characteristic utopianism of environmentalist public policy at play here. For one thing, these anti-farming mandates come at a time when the war in Ukraine has created significant disruption in the global food supply. In fact, as The Scroll's Clayton Fox pointed out, increased food insecurity is something that the Dutch government has recently acknowledged in another context:

On Saturday, in a jaw-droppingly ironic video commemorating the Holodomor, Stalin’s deliberate starvation of millions of Ukrainians from 1932 to 1933, Prime Minister Rutte committed $4.1 million to the World Food Programme, saying that the Netherlands was glad to support not only countries in need of food, but also Ukrainian farmers. It appears that the Netherlands is subsidizing beleaguered Ukrainian farmers while bribing their own to shut down forever.

Has it never occurred to him that "countries in need of food" might benefit even more from an increase in the supply of food? Money is nice and all, but you can't eat it.

But there's another aspect of Leftist utopian tendencies that this lays bare -- their disdain for their own nation, its customs, and its people. The Netherlands is the world’s second-biggest agricultural exporter, after the United States. Anyone who has spent time with farmers knows that the work is more than a job for them, and that is especially true for Dutch farmers, who have tended to carry the way of life with them wherever they go. As we wrote in our last post,

The Dutch are proud of their farming prowess, and it lives on even when they've left home. The United States and Canada are home to scores of ethnically Dutch farmers whose families made their way west to escape the great wars of the 20th century, and much of modern South Africa was built by the Dutch farmers, or Boers, who arrived there in the 17th century. Farming is in their blood.

But Mark Rutte and the E.U. want that way of life to come to an end. It is as shameful as it is short-sighted.

4 comments on “More War on the Boers”