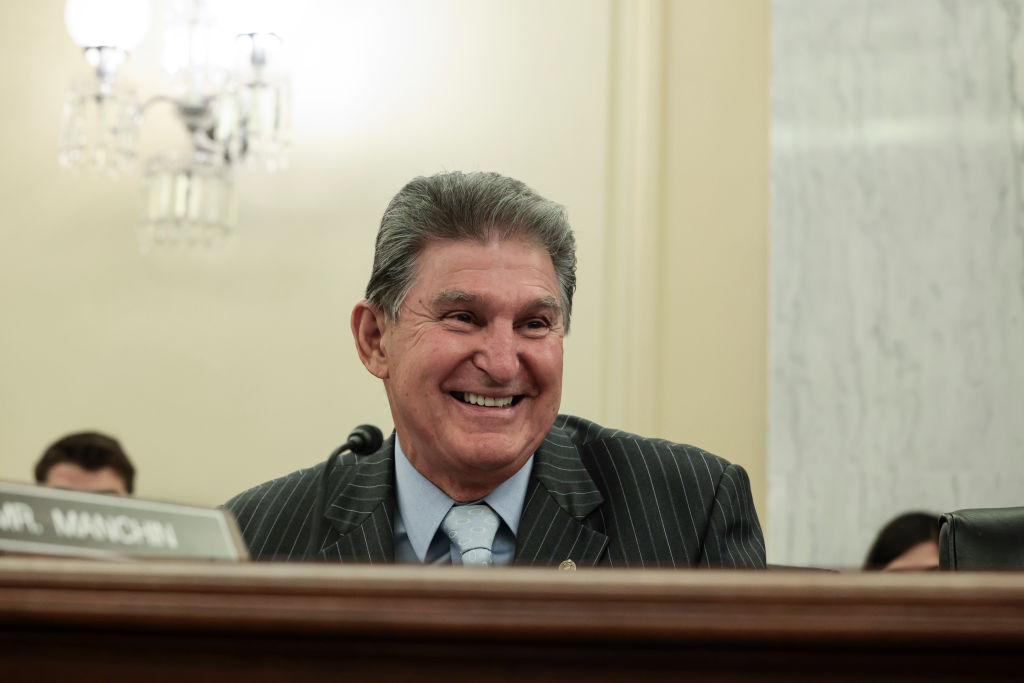 Senator Joe Manchin, last of the Blue Dog Democrats, has announced that he is officially a "No" on the fiscally irresponsible, $3.5 trillion "Build Back Better" bill. Which is to say that he's dropped a lump of West Virginia coal into Joe Biden's stocking, while delivering mirth and jollity to the rest of us. Just call him Father Christmas!

The details are spicy -- supposedly Senator Manchin was angry (understandably) at the White House for releasing personalized statements targeting him for holding up BBB (at a time when he's been continually harassed by far left activists, who've taken to camping outside his house) when they know full well that he's far from the only Democratic senator with serious reservations about the bill.

Privately Senator Sinema has been telling people it’s not just her and Manchin who are opposed to #BuildBackBetter — many of their Democrat colleagues are opposed as well, but afraid to speak up. She tells them they’re “hiding behind her skirt.”

In the end, frustrated by the long, pointless negotiations, he gave the White House just 30 minutes' notice before he went on Fox News to drop his bombshell. In the interim, he refused to take the panicked phone calls of White House staffers, desperate to head him off at the pass.

So, what did the senior senator from West Virginia save us from? The New York Post explains:

The $5 trillion BBB bill would have been a handout to Democrat-backed unions, federalizing child-care and pre-K workers into their ranks. It was full of gifts for everyone from rich people living in Democratic states (via the state and local tax deduction) to journalists (via media subsidies). Besides being a colossal waste of money, its “climate change” subsidies would have hurt Manchin’s state of West Virginia...

The legislation would have driven up the cost of everything for everyone — adding to our already historic inflation. It was nowhere close to being “paid for,” as President Biden claimed. And yes, it is $5 trillion, not the $1.75 trillion Democrats dishonestly advertised — by pretending programs would disappear after a year or two, when they knew they’d extend them forever. Even not accounting for that gimmick, the bill would add at least $367 billion to the federal deficit.

Not jolly enough for you yet? Then check out this piece at NPR, which sobs over Manchin's decision to destroy the world in a climate change-y blaze just for kicks:

With billions of dollars for clean energy, the Build Back Better legislation has the potential to substantially and rapidly cut heat-trapping emissions in the U.S. But Sen. Joe Manchin, D-W.Va., rejected the bill on Sunday, and that means Build Back Better is effectively dead at a time when scientists say the world can't afford to wait on climate change. "It's really disheartening," says Leah Stokes, associate professor of political science at the University of California, Santa Barbara. "We don't have any more decades left to waste, and failure is not an option."

Why on earth did they seek out a poli-sci professor to comment on the climate situation? More:

The legislation earmarked $555 billion for renewable energy and clean transportation incentives over a decade in the country's largest climate change investment ever. The policies are crucial for President Biden's goal of cutting greenhouse gas emissions 50%-52% by 2030, compared with 2005 levels. Even that goal may not be enough to avoid climate change's most destructive impacts, scientists warn.

Note that even BBB wasn't extreme enough for these people, for all their wailing and gnashing of teeth over its demise. Build Back Better is already pretty unpopular in Manchin's home state (it polls worse there than in the country overall, and that's saying something). In any event, for braving this near universal condemnation, Senator Manchin has made all of the right enemies. Merry Christmas, Senator!