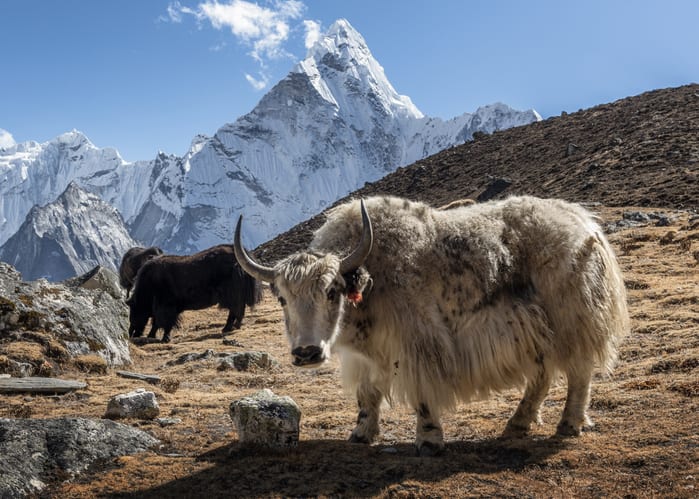 The only possible explanation for natural phenomena (floods, earthquakes, the heartbreak of psoriasis), or any movement of peoples from prehistoric times to the present (Attila the Hun, take a bow) is global warming. There is literally nothing it cannot do as it continues on its rampage against those who have inflamed Mother Gaia, melting glaciers and setting forest fires in its wake. Why, it's even bringing the mighty Himalayas to their knees:

High in the Himalayas, on a rugged plateau dotted with empty mud huts, an exodus has begun. In the village of Dhye, crops are stubby, dead stalks. Water is scarce. The only school closed a few years ago. With dwindling food, most families have packed their belongings and left, driven out by a faceless, man-made enemy. They are Nepal’s climate-change migrants, and there will be more.

“I love this village,” said Sonam Chhiring Gurung, 76, one of the final holdouts, “but I can’t survive here much longer.”

There was a time when reporters actually reported, but today they all want to be screenwriters and storytellers, and so setting the correct emotional tone from the outset is crucial -- softening you up so that you'll more readily buy what they're ultimately trying to sell you. But first, Apocalypse Now.

Climate change is remaking the Himalayan region, putting at risk millions of South Asians who depend on its water resources and pushing mountain dwellers in northern Nepal, home to the world’s highest peaks, to build new settlements at lower altitudes.

Glacial melt has accelerated in the 1,500-mile-long Himalayas. Land once used for growing vegetables has become barren. Yak herders say they are struggling to find grazing patches for their animals. Scientists have found that rising temperatures could spread malaria and dengue to new areas of the Himalayas, where mosquitoes have started to appear in the highlands.

It's like a supernatural force that must be appeased. Ancient Aztecs sacrificed human beings on a disassembly line of death in order to calm an angry god. Christians prayed for deliverance. Modern man, even more nobly, would destroy his entire civilization if it would save just one plant or peasant.

Now it's time for the predictions. Stop me if you've heard any of these before:

Researchers estimate that the number of climate-change migrants — those fleeing natural disasters, droughts or other calamities — could reach a billion by the end of the century.

South Asians are among the most vulnerable. Last year, after an unusually weak monsoon, water nearly ran out in Chennai, one of India’s biggest cities. In Bangladesh, up to 18 million people face displacement by 2050 from sea rise alone, according to the Environmental Justice Foundation. Extreme heat is making people sicker and poorer, and could sharply diminish the living standards of 800 million people in the region if goals for mitigating climate change are not met.

Warmer Himalayas could have disastrous consequences for the subcontinent. Last year, in one of the most complete studies on mountain warming, scientists warned that even if the world’s most ambitious climate change targets were met, at least one-third of Himalayan glaciers would melt by the end of the century.

If global warming and greenhouse gas emissions continue at their current rates, the region could lose two-thirds of its glaciers by 2100, according to the report, the Hindu Kush Himalaya Assessment.

Etc. etc. Further down in the story, you'll learn (surprise) that some of the areas in question are notably inhospitable to man, and that the poor villagers are trying to farm in places the government has actually discouraged people from inhabiting -- at an altitude of 12,000 feet, where the principal geologic feature is, surprise, rocks. A few of this story's designated victims finally abandoned their former home in order to move closer to a "still-flowing stream" a mile away:

“I couldn’t stay,” said Tsering Lamke Gurung, 54, a village leader and father of eight, four of whom have died. “My children and I were not able to survive from crop failure.” The leavers have trickled out of Dhye in groups over the past few years. They strapped bundles of food and clothing to their backs and hiked nearly a mile down to the banks of a still-flowing stream. They called their new community Dhye Khola, a local name for the water body.

There were some moments of triumph. One resident sent pictures of the uncultivated land to a French aid agency, which agreed to plant fruit trees in the village and help build sturdier concrete homes for families. But the longer-term settlement process was fraught, illustrating the challenges migrants face in procuring resources for unrecognized villages where residents have no legal right to the land.

Mr. Gurung, who took the lead in building Dhye Khola, said he approached a former prime minister of Nepal for guidance and aid. He met prominent lawmakers, a Nepal-based leader of the World Wildlife Fund and representatives from foreign embassies. “They didn’t support us,” Mr. Gurung said. “They wouldn’t help us get a land ownership certificate.”

It's hard not to feel for these people. But perhaps a lesson can be learned from the human experience elsewhere. At the turn of the last century, long before the demon of "global warming" had first demanded obeisance, Americans moved west, searching for a better life, as the saying goes. Some of them, lured by the railroads, settled in and tried to "dry farm" in what is now North Dakota and eastern Montana -- the Badlands. (For a full account, read Jonathan Raban's brilliant book on the subject.) After a generation or two of failure, they eventually up and moved to the fertile side of the Cascade mountains in Washington and Oregon.

Some places, it seems, just aren't meant for people.