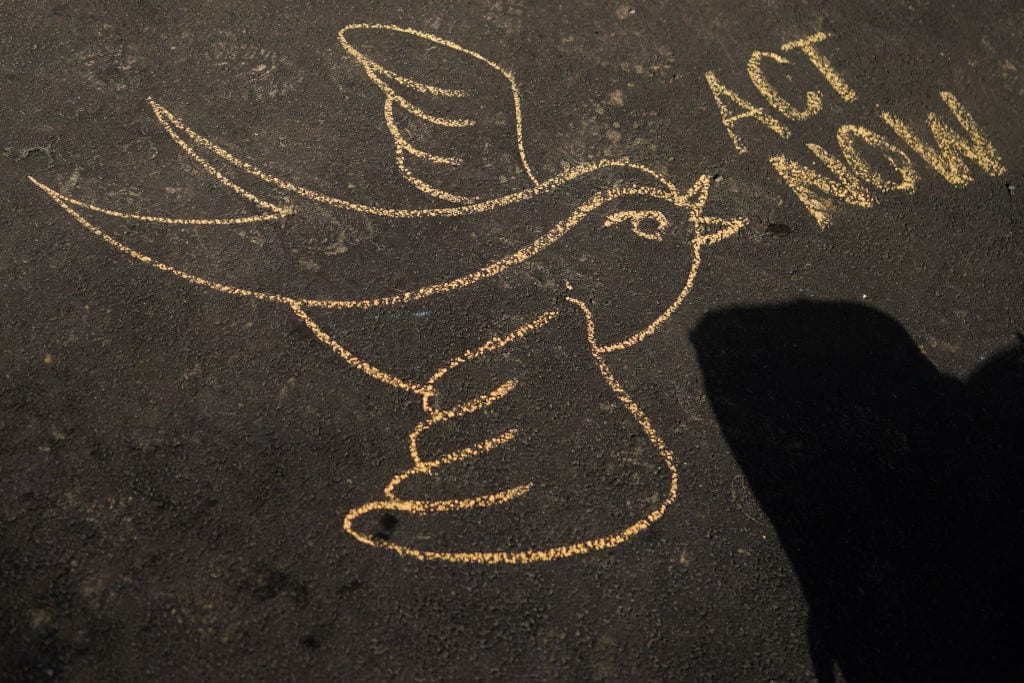 On a recent Question Time, the BBC’s flagship debate program on current affairs, Richard Horton, the editor-in-chief of the medical journal, The Lancet, passionately denounced the UK government for taking too complacent a view of the coronavirus pandemic. Not long before, Dr. Horton had taken the same view -- which he should probably have mentioned -- but epidemics are among his specialties, and he corrected himself when China admitted the seriousness of the threat. And as an expert with medical credentials up to his medulla oblongata, he seemed to speak with greater authority than the politicians on the panel.

But how far does that authority go? Horton intends to expand it very considerably. He argues that doctors as doctors have a professional obligation to become political activists and to engage in civil disobedience when they think that a political issue has bad medical consequences for their patients—or indeed for any doctor’s patients. His editorials have made The Lancet notorious for the range of topics, including directly political topics—inequality, for instance, or Iraq war casualties -- which they pronounce to be medical issues for which they have their favorite prescriptions ready. And on no topic has he been more fervent, more frequent, or more “authoritarian” than on climate change.

Horton's editorials in The Lancet have adopted the “worst case” scenarios of the Intergovernmental Panel on Climate Change (IPCC) to argue that the “climate emergency” is “one of the greatest threats to the health of humanity today” and poses “an acute danger to human and natural systems” (my italics.)  He has called on other professional journals to become “activist” (i.e., to take sides in controversial issues) as The Lancet has done -- for instance, it publishes an annual report on health and climate change that diagnoses a pandemic of climate emergencies which, however, can be cured every time by the same anti-capitalist remedy.

And he has used the journal to call on health workers to join in Extinction Rebellion’s civil disobedience protest against government inaction on the emergency last October which led to scattered acts of disruption—occupying banks, cancelling flights, and blocking bridges, roads, and traffic that included (ironically) an ambulance—by usually small groups of protesters in major Western cities.

Though these protests continue, they seem to be having less impact the longer they last, as with previous radical protest movements. Extinction Rebellion’s larger impact—despite Horton’s high hopes for it as a “transformational”  international rebellion -- has been on the whole counterproductive. Though the police and the courts have been indulgent towards the protesters, the general public has been irritated, even angry, at being blocked and delayed. Successful protests in the past, such as the Suffragettes, triumphed because majorities or large minorities in the population thought they had justice on their side. But what XR wants doesn’t begin to meet that test, at least as laid out by Horton:

Each of these demands is more than problematic. The first glides over the difficulty that there isn’t general agreement on what is the truth—and, significantly, that is the case with almost all political questions. Climate scientists differ, and the moderate global warmers among them, including the IPCC scientists, differ strongly from Extinction Rebellion in their analyses, predictions, and remedies.

Secondly, “act now” is an abstract demand whose abstraction is a deceit. Governments could legitimately reply that they are already acting on climate, but Horton regards their actions as “inaction.” His definition of action in this context is a radical program of decarbonization and deindustrialization. All the signs are that neither governments nor electorates want to go too far in that direction. Hence, Extinction Rebellion (XR) is quite coy about its proposed reforms, but sometimes they leak out. Horton and XR have to find a way around the obstacles of political opposition and public opinion..

Hey presto! That’s demand three: creating a citizens’ assembly to “reclaim control of a paralysed political process.” But the political process he’s talking about is parliamentary democracy, and it isn’t “paralysed” at all as its current handling of the Covid-19 crisis demonstrates (even if you disagree with what it's doing.) Nonetheless, XR is demanding that new bodies be established to take control of major political decisions away from Parliament and the elected government and given to . . . well, other than that they’d be citizens, it's not clear who? Nor how? It’s all very vague and misty, but apparently the process wouldn’t be through elections since, as Horton has already pointed out, they only lead to paralysis and inaction.

All this is slightly concerning. Though the wag who asked —“why not call them Soviets and be done with it?”—probably went too far, it’s nonetheless rings a faint alarm bell when Horton writes, as he did in October, that doctors shouldn't be punished for taking part in Extinction Rebellion protests? Well and good if that means they shouldn’t be punished for voicing their opinions or putting them on placards. That’s free speech even if they use it to say “Climate change is too important to be left to democracy.”

When those words become actions, and those actions break the criminal law, however, we can’t exempt health workers—much though we admire them for the sacrifices they are currently making to keep us safe—from the rules that apply to all citizens in or out of assemblies. And since even a favorable view of Dr. Horton’s politics suggests that he favors some sort of guided democracy with a special role in politics for doctors, scientists, and other experts—especially when that view comes with the imprimatur or The Lancet—we need to remember some old and unfashionable truths.

To start with, we must briefly demystify expertise. Experts are not infallible; they can be wrong. We know that for a certainty because they sometimes differ. That’s why when a doctor gives you a diagnosis of a terminal disease or prescribes a painful cure, he’s not offended if you ask for a second opinion. Similarly, when Horton criticized Tory Ministers on Question Time over their handling of the Covid-19 pandemic, he was really differing with the medical scientists whose advice they were following.

There are many questions too, especially in politics, in which no-one can be an expert because judgments on them require too many different kinds of knowledge for one kind of expert to give an authoritative view. Whether to declare war—the single most important decision a political leader can be asked to make—is one such question.

Climate change is another. Though there is said to be a “consensus” on it, there are a significant number of dissenters in what is a very various profession. Even if there were unanimity among them all, they would still have to deal with criticisms and opposing viewpoints from economists, engineers, philosophers, and as Horton proclaims, from doctors and medical scientists too. So when experts enter the political arena on such issues as climate change, they are only partly giving a professional opinion with some authority; it would be more accurate to say that they're contributing their particular insights to a debate among equal citizens, including other experts who draw on different sources of authority. Even (or especially) in their own profession, their authority is limited. For instance, since it is obvious that many doctors and scientists do not in fact agree with Horton’s view of climate change and give plausible reasons for their disagreement, they can be under no obligation to campaign, let alone break the law, to advance those views .

That’s important for reasons going beyond politics. Horton has made some serious blunders in a largely successful editorial career: over his defense of a doctor which critics contend has led to a fall in child vaccinations, his large exaggeration of casualties in the Iraq war, his publishing an open letter to the people of Gaza that falsely accused Israel of a massacre, and not least his passionate, engaged campaigning over climate change. To be fair, campaigning editors take risks to uncover the truth; they don’t always pan out; and Horton is a campaigning editor but not an infallible one. Have a look at some of the criticisms of The Lancet’s 2019 report on health and climate change that raises alarmist anxieties over the most recondite threats to health from fossil fuels when the single most relevant chart in it shows that mortality rates are falling fast worldwide.

How Horton deals with such problems when they arise therefore matters. It's a mixed record. He did retract the Open Letter to the people of Gaza on a trip to Israel--and he did so generously. But when two Australian climate scientists submitted a letter disputing an article on the precautionary principle, he overruled sub-editors who had been negotiating its publication and rejected it. When his pet political ideas are at stake, he has to be forcibly evicted from his fixed positions. Sure, editors must have the final say, but in a professional journal  the spike is not best way to advance a scientific argument, and silencing your critics is not a good exercise of professional judgment.

They are, however, the familiar political tactics of Woke ideologues—and thus a sign of the spreading blight of the politicization of professional associations and their particular ethics. We can hardly accuse Dr. Horton of such abuse, however, since he has anticipated us by proclaiming it. He does so in his editorial calling on health workers to support Extinction Rebellion, lamenting as follows:

In Britain the Royal Society is Science and The Lancet, though independent, is its Prophet. The Royal Society is a professional body dedicated to seeking the truth of nature through observation, experiment, and argument. Horton has found the one great truth and wants to proclaim it to the world and if possible, to make it compulsory. They’re a bad fit.

The moral is clear, and the solution should be satisfactory to all. Horton wants to be a great campaigning editor in the hard-hitting style of a Hugh Cudlipp or a Harry Evans. Give him the editorship of a major left-wing newspaper. The Guardian springs to mind. It could certainly use some of Horton's energy, confidence and expertise.  He would enjoy campaigning without the dispassionate reticence of science.

Make an honest man of him. And make The Lancet an honest professional journal of medical science. They'll both be happier.