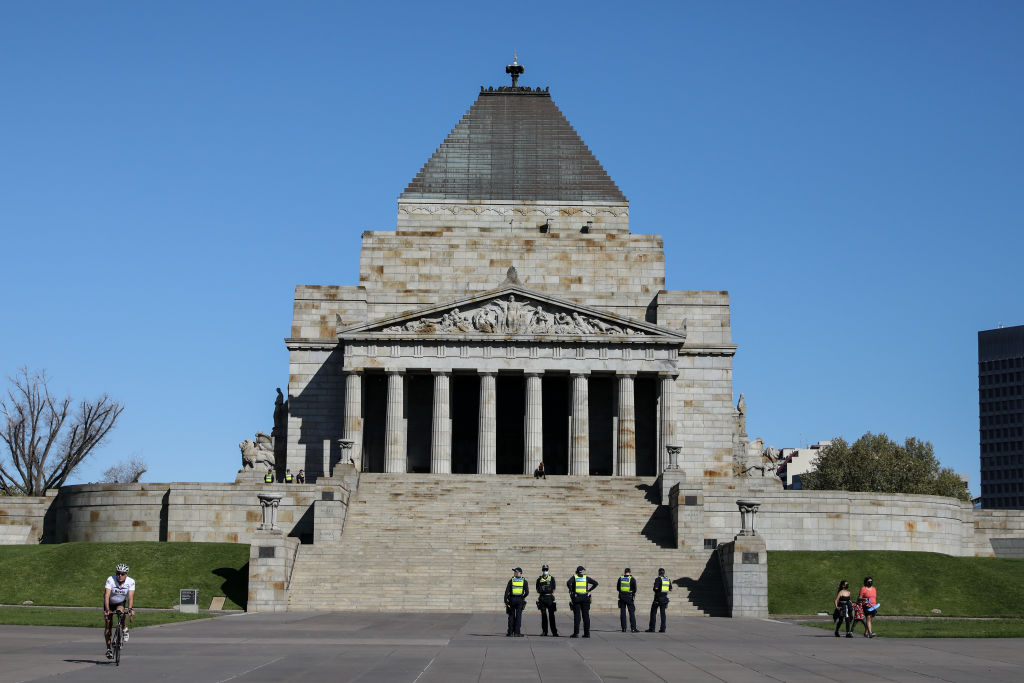 Things are going from bad to worse in Melbourne and in wider Victoria state in Australia. I haven’t done the survey but it is credibly reported that as of 23 September, Melbourne has suffered more days of lockdown than has any other city on earth. In a marvelous piece of theatre construction workers were informed that vaccination was to become a ticket to work.  Objecting to the weakness of their own union (the CFMEU) in the face of this unconscionable mandate some hundreds demonstrated and wreaked damage on the CFMEU’s Melbourne office front.

In a fit of pique, El Duce Dan Andrews, the Victoria premier, closed down the whole construction industry in Victoria for two weeks. The result: tens of thousands of building workers unemployed with nothing to do but demonstrate. Proof positive of what has become widely known. Dan is not only a communist but a very stupid one.

On 22 September building workers occupied the steps of a shrine in Melbourne dedicated to soldiers who lost their lives in WWI. The press was onto this. “Absolutely disgusting” read the headline in The Australian, the only not-so-left newspaper in the land. Only one or two conservative voices pointed out that demanding freedom on the steps of a shrine commemorating those who fought and died for freedom was not so inappropriate.

Notice the tone of most media reporting. When what the press should focus on is the brutality of Victorian police charging up the steps firing rubber bullets at building workers (not neo-Nazis by the way) who were simply standing there calling for freedom. You may have seen the same in Venezuela. Truly we are seeing how tenuous is freedom.

In echoes of the ban on drones filming Haitian illegal aliens gathering under the International Bridge in Texas, the Victorian police banned news-gathering helicopters flying above the demonstrations. The aptly black-shirted police commissioner relented under pressure; yet still demands that approval for flights be sought and any videos obtained be delayed for an hour before being broadcast. A police state has arrived; though its extent depends on where you live, now that Australia has been Balkanised.

Effectively, Australia has reverted to its pre-1901 colonial status, where each state formed a self-governing colony under the British Crown. Over the past eighteen months states, particularly Victoria, Queensland and Western Australia, have mostly closed their borders to both international  and domestic travellers; and, also, even to returning citizens of their own states from other parts of Australia, unless they are sharpish before the gates shut at twelve-hours’ notice.

Depressingly, according polls, Dan still seems to have the majority support of Victorians. Those old 1930s films of dictators being cheered on by adoring crowds don’t seem forced, do they. Better not pin our hopes on the sanity of crowds.