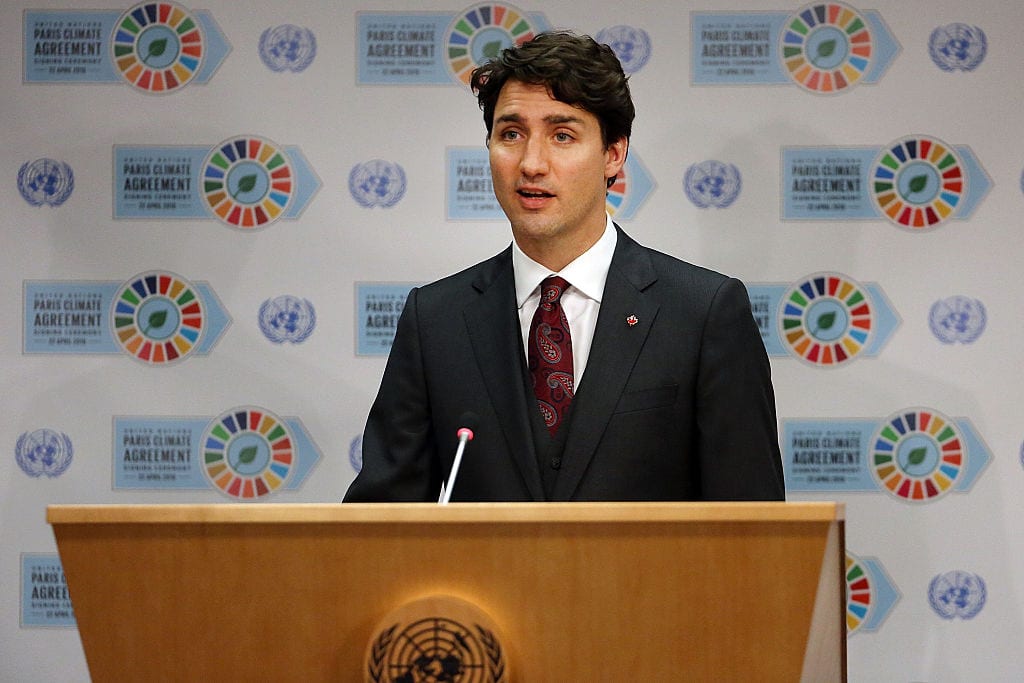 Checking the weather channel early this a.m., I see that the temperature in Edmonton is minus 20 Celsius (minus 4 Fahrenheit). By comparison, Calgary is positively tropical at minus 10. A correspondent of mine, a science professor at the University of Alberta who was initially moderately accepting of the global warming hypothesis, has revised his assumptions, just now writing to say we are in the midst of a “global emergency”—not only COVID-19 but global cooling. Vancouver, where my wife and I make our home, has been unseasonably chilly for a Pacific coast city. It was snowing this morning, April 2 (as of this writing), a day after April Fools’, so it’s not a joke. The cooling trend has been observable for some time.

Meanwhile, our nitwit of a Prime Minister, the ineffable Justin Trudeau, has imposed an onerous carbon tax on the nation to fight man-made (or people-made) global warming, aka “climate change,” at a time when the economic shutdown owing to the coronavirus has left many people out of work and unable to meet even ordinary expenses. Trudeau has swallowed every lie, every false prediction, every disprovable premise of the anthropogenic global warming movement, as his 2019 statement on Earth Day bears painful witness. His advice for Earth Day 2020 was to stay at home and unplug. As one commenter tweeted in response, “Everyone may as well practice sitting in the dark, because that’s where millions of laid off people will be when the 50% carbon tax comes April 1rst.” Another mordantly asks, “Should we unplug ventilators or industry producing them tonight?”

Trudeau has absolutely no idea how to run a national economy, having quipped that the “the budget will balance itself,” but is certainly up on leftist ideology, never having met a left wing dictator he wouldn’t consider a political father or brother. His sympathy for Fidel Castro is a matter of record. His admiration of China’s “basic dictatorship” because it “allows them to actually turn their economy around on a dime” has not been blunted by a Chinese-origin pandemic or the ruthless policies and state-engendered lies of the Central People’s Government. Indeed, it seems that China has, for some inscrutable reason, motivated him to insist that “we need to go green, we need to start, you know, investing in solar.”

In his 2019 Earth Day Speech, the PM informed us that “Canada’s North is heating up at three times the global average.” You read that right: three times. “Glaciers are shrinking. Sea levels are rising…Floods, fires, heat waves, tornadoes…are becoming more intense and more frequent, threatening communities across the country.”

Batten down the hatches. We’re going under. You can see the devastation, the rising oceans, the sinking islands, the calving glaciers, fires, floods, tornadoes, maybe even the Four Horsemen of the Apocalypse galloping by, hooves thundering. What I note is minus 20. What I see is snow falling on Canada’s balmiest city. What I recall is some of the coldest winters on record in Ontario and Quebec, where I formally resided. Trudeau’s sources are the totally discredited IPCC at the U.N. and the Paris Agreement from which Trump has wisely withdrawn the United States. None of Trudeau’s dire prognostications are even remotely detectable. They are pure Obama boilerplate. They are the Liberal Party of Canada’s version of the Democratic Party’s Green New Deal bilge.

When faced with contrary evidence, leftists like Trudeau and his confrères reach for desperate or ridiculously involuted explanations. Yes, the Jakobshavn Glacier is growing—but conditions will flip again, never fear. Global cooling is really a function of global warming. Computer models tell us what we need to know, despite the fact that the models are faulty. Climate experts are reliable, despite the revelations of tampering with and suppressing of countervailing data; the notorious Wikileaks Climategate 2.0 cable dump confirmed that the “climate science" had been cooked and the “consensus” was more of a political and financially lucrative gambit than a scientific project. Michael Mann’s famous hockey stick graph is still credited, though it whiffed its slapshot by a country mile, having been thoroughly shattered. Mann apparently forgot to include the Medieval Warm Period (or Medieval Climate Optimum) in his calculations, which would have invalidated his global warming thesis.

Nonetheless, we still believe. Case in point. In conversation with my neighbor, a Trudeau stalwart who derives her “facts” from the CBC and the Globe and Mail, I learn that polar bear colonies are approaching extinction. She is profoundly worried, empathizing with the poor beasts. When I point out that biologist Mitchell Taylor, who works with the Nunavut Territorial Government of Canada, stated categorically that their numbers in the Canadian north had increased by a factor of 25 percent, she is incredulous (National Center for Policy Analysis, January 25, 2007). When I mention that the total North American polar bear population, which was estimated at between 5000-8000 individuals in 1970, is approximately 29,500 today, I am met with complete skepticism. (Global Warming Policy Foundation, State of the Polar Bear Report, 2018). Such blank refusal to accept researched evidence suggests that the real problem lies with our ursine activists who suffer from a sort of, let’s say, bi-polar syndrome, seeing one thing transpiring in the Arctic while refusing the factual medication that would enable them to see another, which just happens to coincide with reality.

As with the polar bears, the activists’ numbers are also ramifying and their colonies prospering throughout their natural habitats. They are the real deniers. What all this comes to, obviously, is that we have to eliminate fossil fuels and stop the flow of oil whose downline carbon emissions are heating up the earth so that, by and by, we will all either drown or fry. We target Big Oil and forget that the current industry of choice is actually Big Green, a multi-billion dollar Solyndra-type scam, which Norman Rogers has remorselessly exposed in Dumb Energy. And as Benny Peiser writes in a definitive study at the Global Warming Policy Forum, “The renewable energy industry… downright lies about solar and wind energy being the way of the future [and has] convinced us into giving them billions to chase a pipe dream.” NE News NOW puts it succinctly: “Behind the dire warnings of the Green agenda is reportedly the green glow of money.”

Going back to Trudeau’s apocalyptic fiction, he is prepared to destroy the country in order to save it from a non-existent cataclysm. If the seas are rising and presumably threatening to swamp the world’s beaches and low-lying island nations, asks Timothy Birdnow in American Thinker, why have the Maldives built four new airports to welcome tourists? Tuvalu, which was apparently on the point of submersion, has grown in size. If we are to be buffeted by extreme weather conditions, turning pedestrians into kites, how is it “we have just come out of a hurricane drought”? If the climate is heating up, why have there been “no major changes in the Earth's albedo?” But alarmists will have it any way they can. Physics.Org at the University of Bristol assures us that if icebergs and ice caps are melting, the seas will rise; however, if they are growing, as is the East Antarctic ice sheet, then global sea levels will also rise. But such bets must also be hedged, so the growth of the East Antarctic ice sheet may be less than originally believed. As they say, go figure!

As Rob Bradley Jr., CEO of The Institute for Energy Research writes, doleful predictions of climate warming “constitute yet another exaggerated Malthusian scare,” like those of the population bomb (Paul Ehrlich), resource exhaustion (Club of Rome), and Peak Oil (M. King Hubbert)—none of which have come to pass. But Trudeau is a true believer. Thus he has been shutting down pipelines left and right, has effectively bankrupted the oil-producing province of Alberta, and severely damaged the Canadian economy. The earth is warming at an exponential rate, so we must act precipitously. We must blockade the Athabaska oil sands and close down the refineries. A carbon tax is only the next step in the greatest utopian boondoggle of our time.

It’s still pretty cold, but the snow has tapered off, a sure sign of global warming.