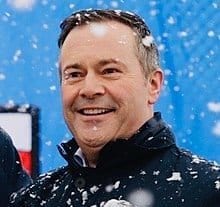 Time for a change in Alberta.

Alberta Premier Jason Kenney is an ambitious man. Not that that should surprise anyone -- he is a very successful politician, and you don't get as far up what Benjamin Disraeli famously called "the greasy pole" as he has without quite a lot of gumption. But the question we must ask about any politician is whether his personal ambition is leading him to stray from the good of his constituents. I find myself wondering whether this is the case with Kenney.

I say this after hearing his comments delivered at the Wilson Center in Washington, D.C. last Friday concerning the necessity of a "gradual shift from hydrocarbon-based energy to other forms of energy” in Canada and throughout the world. He continued,

“It is preferable that the last barrel [of oil] in that transition period comes from a stable, reliable liberal democracy with among the highest environmental, human-rights, and labor standards on earth.”

This is a major rhetorical shift for Kenney, who has spent the past several years cultivating his brand as Mr. Alberta, the great defender of Canada's oil sands and the jobs they provide. To hear the Premier of Alberta -- the Texas of Canada -- sketching out an obituary for oil and natural gas ("It died surrounded by people with exceptional labor standards") is nothing short of amazing.

Was it a mistake? Will this be walked back, the way that Kenney's fellow former Tory cabinet minister Peter MacKay's statement in October that social conservatism “hung around [then-Tory Leader] Andrew Scheer’s neck like a stinking albatross" eventually was? (Interestingly, those remarks were also delivered at the Wilson Center in D.C. What is it about Canadian politicians saying things in the States that they wouldn't say in Canada?)

As you likely know, Kenney parlayed his nearly two decades as a high profile Federal MP and Cabinet Minister in Ottawa into the leadership of the Progressive Conservative Party back in Alberta. He ran on a platform of merging the party with the rather-more-conservative Wildrose Party, in the hope that the two would stop splitting the vote and return right-of-center governance to Alberta after its brief dalliance with Rachel Notley's socialist NDP. And that's exactly what happened -- the two parties merged, the NDP was kicked to the curb, and Kenney was hailed as a liberator.

Since then he has, by and large, been an able spokesman for Alberta and Western Canada generally, fighting against the implementation of the Trudeau government's carbon tax in court, opening a public inquiry into the campaigns against Albertan oil and gas, and fighting for the construction of pipelines to get Canadian crude oil to refineries or to tankers for export.

All of which makes the Premier's words in Washington that much more puzzling. Why would Jason Kenney, the great defender of Alberta against the domineering Liberal government in Ottawa, suggest that an industry which is universally associated with Alberta is not long for this world? There are, it seems to me, a few possibilities.

First, it's possible that Kenney is conceding an argument for the sake of a short-term gain. The gain would likely be the Teck Frontier oilsands mine, or some other project which Kenney feels to be important. As Don Braid put it in the Calgary Herald on Monday:

It is almost impossible to imagine those [undecided] Liberal ministers approving Teck without some assurance that, over time, UCP Alberta is comfortable with transition, even in Kenney’s long-term scenario.

The argument being conceded, however, is the Liberal's, namely that Canadian oil and gas needs to be phased out within a few years. In fact, back in 2017 Justin Trudeau took some heat (including from Western Liberals and NDPers) when he said

We can’t shut down the oilsands tomorrow. We need to phase them out. We need to manage the transition off of our dependence on fossil fuels but it’s going to take time and in the meantime we have to manage that transition.

Then-Premier Rachel Notley (still holding out hope that she could be reelected) shot back,“Alberta’s oil and gas industry and the people who work in it are the best in the world and we’re not going anywhere, any time soon.” And Kenney himself got in on the act, asking whether Trudeau's "phase-out" meant "he wants to hand-over all global oil production to Saudi [Arabia], Iran, Qatar, et al?" He added "If we end 'dependence on fossil fuels' how will Justin Trudeau fly to private Caribbean islands? Planes & helicopters fueled by pixie dust?"

Strange that present-day Jason Kenney sounds so much like Justin Trudeau.

In any event, conceding this argument to get Teck approved would be a serious miscalculation. To do so would be to undermine an entire industry for the sake of one part of that industry. It would be entirely nonsensical.

The next possibility is that he has really come to believe that Canada needs to transition away from its oil and gas industry. There was some real consternation shortly after Kenney took office over his decision to appoint Mark Cameron, formerly head of the carbon tax activist group Canadians for Clean Prosperity, as Deputy Minister of the Policy Coordination Office. Is it possible that Cameron, or someone else who has Kenney's ear, has convinced him that the most conservative thing he could do would be to manage the decline of the existing energy industry?

One final possibility is that this rhetorical shift isn't about Alberta or Albertans at all. The federal Tory Party has recently lost an election, despite the various scandals rocking Justin Trudeau and his party. The Tories actually gained seats and won a greater percentage of votes, but this only solidified their dominance in Western Canada. In Ontario, Quebec, and the Maritimes they barely moved the needle.

All of which has precipitated a massive debate within the party about how to win over the rest of Canada. And as usually happens when conservative parties lose, the growing consensus among the consultant class is that if they want to win, they must simply embrace liberalism.

Now, while he's staying involved, trying out the role of kingmaker, Kenney is unlikely to jump into the ongoing Tory leadership race. He hasn't even been Premier of Alberta for a year, so he can't very well head to Ottawa now. But it is likely that Kenney is calculating that adopting a slightly modified version of the Green movement's messaging will sound reasonable to voters in Ontario and perhaps help shape their view of him, laying a foundation for his ascent to the top of that greasy poll in a few years time. Maybe he figures that he, Mr. Alberta, has locked down the support of Western Canada, and now he is looking eastward. And once the opportunity presents itself, he can save the Tory Party just as he has saved Alberta.

Except, one wonders, if he trades the oil and gas industry for theoretical support in Ontario somewhere down the line, will he really still have Alberta locked up? This seems by no means certain. It seems more likely that the men and women of Alberta who depend on oil and gas for their livelihoods, when they hear his pitch, 'Kenney the hero who took down the NDP, Kenney the fighter,' will remember more than anything else the moment when he surrendered.