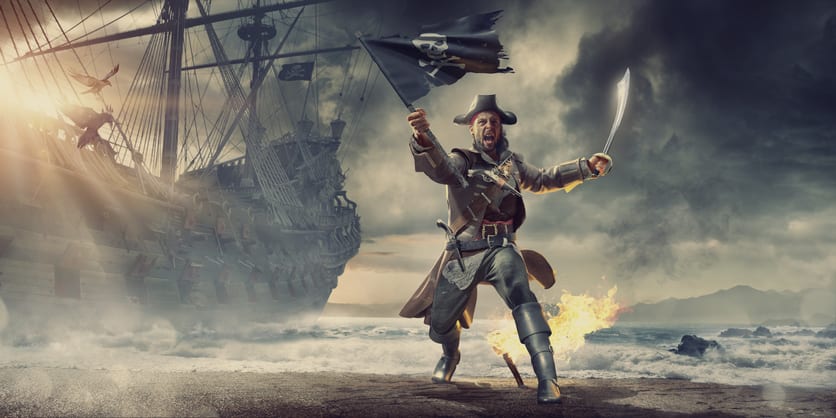 You're probably familiar with the phrase "false flag operation." Referring originally to a ship's flying the flag of a different nation than that with which it was aligned in order to deceive the enemy, it has come to refer to any such misrepresentation, particularly those with the intent of casting one's opponents in a negative light.

The thing that makes false flag operations so effective is that it is often impossible to prove, beyond a shadow of a doubt, that one has actually taken place. Absent an admission of guilt, all one can do when investigating the circumstances is to lay out the facts and let the jury decide.

I bring this up because I've recently stumbled upon two stories which have the appearance of false flag operations. The first is by Jazz Shaw, who reports on the attempt to build what's being billed as the next generation of nuclear power plant in Idaho. The plant would serve roughly 720,000 homes in that state and in neighboring Utah. Communities in both states which would benefit from this project have already signed on, but one group of activists have made it their mission to convince all involved that it's a bad deal.

The group is called the Utah Taxpayer Association, and their principal argument is that the project is a waste of taxpayer money and (because the technology is still being developed) is likely to fail and lead to higher electricity prices.

Well, as a conservative, fiscal responsibility arguments always get my attention. But Shaw points out that there is something fishy about the organization making the argument:

As to the “fiscal conservative” group trying to get municipalities to pull out of the project, the Utah Taxpayer Association is being fronted by The Hastings Group. One look at their client list at that link will give you an idea of their general ideological makeup. They include:

The Utah Taxpayer Association has also enlisted anti-nuclear power advocate Peter Bradford as a spokesperson. The list of their association with green energy and environmentalist groups goes on.

Shaw doesn't mention this, but along those same lines, the website of The Hastings Group is full of boasts about their "18-month push" to pressure the Trump administration to stop off-shore drilling and their "12-year campaign to shift media attitudes about socially responsible/sustainable investing," the latter being code for divesting from fossil fuels.

Judging by these relationships, it seems unlikely that the Utah Taxpayer Association is the confederation of Goldwater Republicans that its name and rhetoric would lead you to surmise. It's rather more likely that some textbook Greenies, aware that their normal pitch would have less purchase in rural mountain states, decided to attack the problem from a different angle, hoping that cost-conscious conservatives would miss the lefty agenda behind the scenes.

And what is that agenda exactly? After all, as Shaw notes, nuclear power is effectively zero carbon, so you'd think that anti-carbon emissions activists would be on board with this project. Their opposition reveals their true colors -- for a lot of them, at least, it isn't the carbon they care about so much as limiting the competition for their so-called renewable energy projects.

The second potential false flag is rather more complicated, and has to do with the Atlantic Coast Pipeline, a planned project which was principally owned by Richmond, Va., based Dominion Energy. It was meant to move natural gas from the Marcellus Shale formation in West Virginia through Virginia and then down to North Carolina. Had the pipeline gone through, it is probable that Dominion would have built a second natural gas liquefaction terminal, likely in the Newport area, to complement the one it already owns in Cove Point, Md., creating lots of well-paying jobs for Virginians and allowing the company to export significantly more natural gas overseas.

"Was" is the operative word here, however, because in July it was announced that Dominion is cutting its losses and pulling out of the $8 billion project, citing "the increasing legal uncertainty that overhangs large-scale energy and industrial infrastructure development in the United States." This is being spoken of principally as a victory for the environmentalist groups which have been trying to kill the project since it was launched, with Michael Brune of the Sierra Club crowing,

Dominion did not decide to cancel the Atlantic Coast Pipeline—the people and frontline organizations that led this fight for years forced [it] into walking away.

However, journalist and Virginia native Arthur Bloom is skeptical. As he put it in a recent podcast appearance, "the death of the Atlantic Coast Pipeline has sort of been heralded by activists as this big win, this is the new Virginia, pushing back on decades of probably-racist Republican rule. Virtually none of that is true."

Bloom has written a detailed piece at The American Conservative in which he attempts to connect the dots to discern what really happened here. The thing is, Dominion is not only pulling out of the Atlantic Pipeline, it is, as the Wall Street Journal reports, "selling the rest of its natural-gas transmission and storage network to Warren Buffett’s Berkshire Hathaway Inc. for $9.7 billion," a deal which includes a 25 percent stake in its Cove Point liquefaction facility. As he investigated the "various interests that were publicly opposed to the construction of the pipeline," Bloom was struck "quite forcefully [by] how many of them were connected to Berkshire Hathaway."

One of those interested parties was Michael Bills, a Virginia billionaire and chairman of the board of environmental lobbying group Clean Virginia, who has waged a war against Dominion for the past several years, even offering to max out donations to any political candidate in the state who pledged not to accept any money from the company. Bloom points out that Bills is the former business partner of Berkshire Hathaway executive Ted Weschler, who is frequently mentioned as a potential replacement for Warren Buffet, as Berkshire's CEO. That doesn't prove anything, but it is a connection, and a high level one at that.

Bloom also details the political opposition to Dominion from the state's ascendant Democrats, a more important part of the story than the legal and regulatory hurdles to the project. (Indeed, the project had recently won big at the Supreme Court). Of course the state Democratic ascent has been funded in large part by Berkshire money too. Bloom notes that "the largest single donor to the Democratic Party of Virginia in 2015 was the son of Buffett partner Charles Munger, Jr, whose money supplied more than half of their funds for statehouse races that year."

And then there's the fact that, in Bloom's words,

Berkshire also owned most of the newspapers in western and central Virginia until March, including the Richmond Times-Dispatch, the Free Lance-Star, the Culpeper Times-Exponent, the Daily Progress in Charlottesville, the News Virginian in Waynesboro, and the Roanoke Times, giving them almost complete control of the pipeline narrative in the parts of the state where it mattered.

Be sure to read the whole piece to get into the real nitty-gritty of the thing, but Bloom makes a compelling case that everything is not as it seems. As he makes clear in the interview cited above, there is something a little too convenient about the fact that Dominion was the focal point of so much environmental activism, which had the effect of depressing the stock price of the company, allowing a massive financial firm -- which had deep ties to the environmental activists -- to swoop in "and [scoop] up their assets on the cheap." Meanwhile the environmentalists are able to claim the scalp of a major pipeline project while ignoring Berkshire Hathaway, this despite the fact that the company's anti-union history makes it likely that the unionized workers in Dominion's natural gas sector might soon be out of a job. Unions are less important to the left these days than wealthy environmentalists.

False flag operations are difficult to prove, but Shaw and Bloom argue persuasively that alliances and the money trail constitute a preponderance of evidence in their respective cases pointing to real deception on the part of the interested parties. Read and judge for yourself.