'Extinction Rebellion': Rebels with a Cause 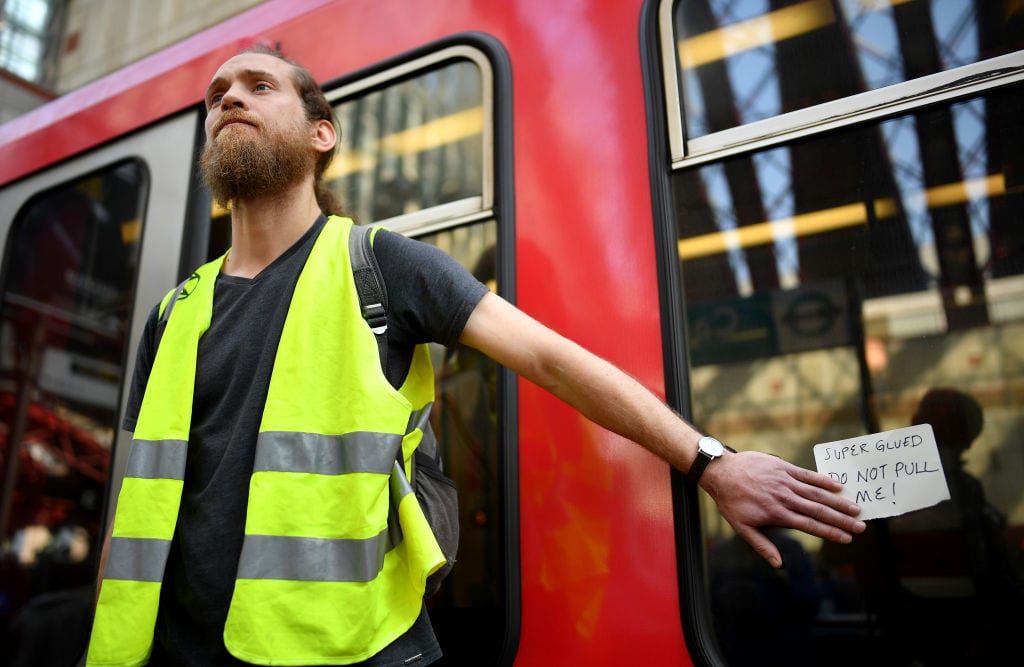 Superglued to the Revolution!

The poet and scholar of Soviet history, the late Robert Conquest, is the author of several commonly quoted -- and misquoted --  rules of politics, the second of which amusingly holds that "the behavior of any bureaucratic organization can best be understood by assuming that it is controlled by a secret cabal of its enemies." (Many sources list this as Conquest's Third Law, but the one they list as second -- "Any organization not explicitly right-wing sooner or later becomes left-wing" -- was actually coined by our own John O'Sullivan.) Anyone who has ever been to the DMV or had occasion to deal with, say, the Bureau of Land Management, will take his point, though it is perhaps slightly contradicted by the fact that the bad behavior of bureaucracies never seems to rein them in. Rather the opposite in fact.

In any event, it isn't only bureaucratic organizations that often seem to be run by cabals of their enemies. Hardly a week goes by these days without some group or other engaging in an officially sanctioned activity that seems to run so counter to its own interests that it really makes you wonder. A recent example of this comes from an outift that has made its name antagonizing the very people you'd think they'd be trying to persuade: Extinction Rebellion.

You might remember them from their various antics over the past few years, including gluing themselves to a DLR train in London so that everyone on the platform would be late for work, and digging up the famous lawn of Trinity College, Cambridge, for reasons which were difficult to follow. I myself happened to be giving my young niece and nephews a tour of Lower Manhattan on the day that they sprayed fake blood all around Wall Street, likely turning those horrified children into life-long anti-environmentalists.

Extinction Rebellion purportedly engage in these shenanigans -- what we used to call crimes -- in order to draw attention to the supposed "climate emergency" we're allegedly experiencing. In fact, they mainly succeed in pissing people off, so much so that even environmentalist onlookers were disturbed by the Trinity Lawn incident, and the train-gluing eventually led to frustrated commuters dragging the protesters from the tops of the trains.

As for their latest bright idea, The Mail on Sunday reports that XR are planning on aggravating the present COVID-19 related economic calamity by "staging rent strikes, halting tax payments and taking out bank loans they don't intend to repay":

Internal documents obtained by The Mail on Sunday set out plans for a ‘Money Rebellion’ involving acts of financial sabotage to ‘directly challenge the fundamental principles that govern our national and global economies’. Despite dire warnings that the coronavirus pandemic has plunged Britain into its worst recession for 300 years, the dossier details how the group – also known as XR – wants to launch a rent strike later this month....

XR hopes at least 5,000 supporters will refuse to pay their rent, adding: ‘Council tenants and private tenants alike can participate in the strike… on such a scale that it forces a society-wide conversation about our misguided economy.’ According to the documents, it will be followed by a tax strike involving 10,000 people who will sign a conditional commitment to withhold £100 of income tax. Such a move will, it adds, ‘present a dilemma to HMRC about whether to pursue 10,000 claims for £100’.

Other possible protests include a utilities strike, where activists refuse to pay their bills unless suppliers promise to switch to 100 per cent renewable energy, and plans for supporters to withhold VAT, student debt or mortgage payments.

In the United States, some 33 million people have filed for unemployment due to this pandemic and the attendant lockdowns. In Great Britain, almost a quarter of workers have been furloughed. It is likely that many more people are going to suffer from the economic effects of this crisis than know anyone who has contracted the virus. But this is good news, say Extinction Rebellion. This is the moment to bring civilization to its knees. While their previous acts of vandalism and disruption mostly fall into the category of nuisance, this proposal has more than a whiff of treason about it.

Now, I'm skeptical that they will actually succeed in bringing civilization down. Indeed, it would be surprising if they convinced enough people to engage in this scheme to have a discernible impact. More than likely they will succeed only in injuring their own credit scores (that is, if they don't get their wealthy parents to pay off their loans before there are any real consequences), while once again enraging regular Britons, who are putting up with a lot right now without having to watch spoiled children trying to tank the economy.

Hence my invocation of Conquest's law. After all, what have they to gain from all of this negative sentiment? Shouldn't they be trying to make a case for the rightness of their cause rather than disrupting the lives of regular hardworking people, all while lecturing them about their carbon footprints?

And yet, it seems significant that, most of the time, XR's disruptors get away with it. At Cambridge -- to the annoyance of locals -- the police simply stood by and looked on. At the London Underground, it was the commuters, not the cops, who dragged them off the train. Its hard to imagine that they would have acted with such passivity without a directive from above, and while I'd like to think that were they to seriously attempt to sabotage an already shaky economy during a national emergency they would be dealt with swiftly and severely, I have my doubts.

In any case,  it does seem like persuasion is the furthest thing from their minds. Rather than seeking and perhaps gaining broad support, leading to the election of politicians who agree to advance their aims, XR's tactics are aimed at giving headaches to the people in power, who fold rather than dealing with them, or else giving a pretense to the people in power who already agree with them to act according to their own inclinations.

Which is to say, perhaps they have a better sense of their interests than I do. Power, not popularity, is what matters to them. Maybe the goal of Extinction Rebellion is to become the cabal that controls the bureaucracy.

Who's to say that they haven't already succeeded?