Diary of an Acclimatised Beauty: Thanks-giving 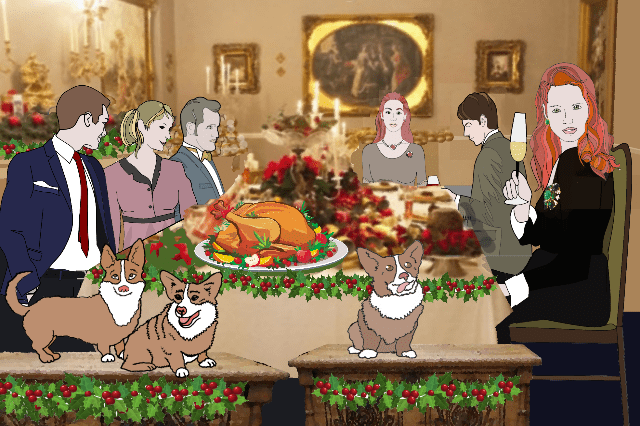 After weeks of dropping hints, I concluded it was time to wave the white flag. Mummy and Daddy are most assuredly not going to provide me with an American Thanksgiving today. And I should have guessed Judith (Mummy) was not coming round when my queries were answered with:

“What is the point of this holiday, again?”

I wanted to scream. We had all made the best of her attempt at a Guy Fawkes Night, when absolutely no one turned up. And I was even silent on the environmental attack the Fawkes night bonfires provide, but that was my point—we make exceptions for holidays! Or at least I did.

Getting back to Thanksgiving—I’d been researching options for a trip back to the States but the Americans seem to have ramped up fear of the dreaded Covid again. One state even suggested for a safe holiday…guests should bring their own plates, cutlery… AND FOOD! 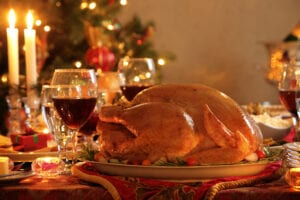 I thought of writing a letter to the editor outlining the fact that the first colonists had suffered many a terrible virus, died by the hundreds and still found time to be thankful. But newspapers, it would seem, exist to convince the world that it is the worst disease to ever descend upon mankind. So I decided to forego the letter, and insinuate myself upon Annabel, whom it turns out was thrilled to have an excuse for a soirée.

The minute I did, it was nonstop texting from her to get it just right. Turkey if we can get it… goose or chicken in a pinch… and then she asked some question about pardoning a turkey that I could not answer but I’m pretty sure it isn’t a religious holiday, and that we could just ignore that bit.

Within minutes responses were coming through on her mass Evite and I realised I’d created a monster… not only was she arranging trips to collect people from the train station, the rest were driving separately and two are coming in by private charter. Yes, a much larger carbon footprint than Judith’s little sausage roast. Oh dear. I was already on a train myself but had expected… well I don’t know what I expected but the die was cast. I decided to ring daddy for a get-around. Even if he didn’t agree with my green-stance, he’d at least offer some ammo. 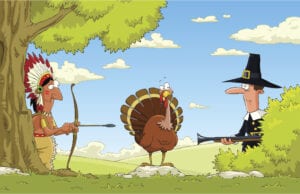 Let's have him over for dinner every year.

And ammo he did offer, but let’s just say, not every shot hits its mark. I arrived at Annabel’s with two days to spare and the house smelled like burnt sage. Not the ritual burning of sage that my L.A. clients do to clean their homes of negative energy, but the actual cooking kind.

I popped into the kitchen to learn they had purchased four turkeys, ‘just to be safe’, and I didn’t get any explanation as to the sage fire. Stacks of canned pumpkin had been sourced and shipped from some American supplier as well as moulds from which to make pilgrim-shaped something or other. I just smiled as the carbon meter in my head ticked away. Annabel found me and whisked me away:

“Leave them!” she insisted; this Covid thing has given them half the year off. “Now what about costumes?”

“That’s Halloween.” I responded, starting to get actually scared.

“No I mean for the servers… at table!” She smirked, as if it were obvious.

“Servers…(OMG!) were probably not a part of the first Thanksgiving and haven’t been at any I’ve attended but obviously this being your house… I think some kind of standard whatever should do.” And this was Annabel…everything big, and to her exacting standards.

It was finally turkey day and we found ourselves around a very festive table with everyone asking me, the resident authority, questions I couldn’t possibly answer. "And do you celebrate this every year in your country?" asked the woman on Annabel’s right.

“But it is American, is it not?” she continued.

“Umm…not entirely. The Canadians do one of their own in October, but theirs is more of a harvest festival, I believe.”

“Jews?…” I continued, wondering where this was going.

“I distinctly read that most of the Jewish holidays are harvest festivals.” she continued.

“I really couldn’t say… but THANKSGIVING is meant to be about giving thanks… and eating!” I said, wishing she really would just stuff a drumstick in her mouth, a la our own ancestors. 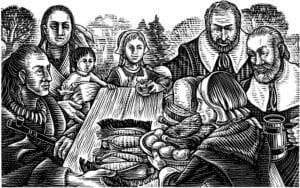 Beats what we had on the boat.

“But wasn’t this about religion? Some religious freedom?” her husband chimed in.

“No—not really… there’s some confusion that a portion of these settlers left to avoid religious persecution, and some did… I think. But some wanted nothing more than to install their own religion as the law of the land. And also… I graduated from Cheltenham, this really isn’t my…”

“But there is a Mayflower Society Ball!” Annabel chimed in. “Have you been?”

“No. I haven’t. It’s in New York and something I feel pretty strongly opposed to. I mean, they try to pass themselves off as American royalty, when the truth of the matter is your life had to be pretty bleak… I mean, really belonging to the lowest ranks of society to hop on a disease-infested ship and take a chance on an absolute unknown.”

I had though—compared to daddy’s suggestion that I sell Thanksgiving as having green origins, and cited the cannibalism of the earliest colonists as recycling.  Good old Daddy. One thing’s for sure, no matter where one celebrates… politics and religion… and green concerns, are off the menu at Thanksgiving.

2 comments on “Diary of an Acclimatised Beauty: Thanks-giving”