Diary of an Acclimatised Beauty: Mourning 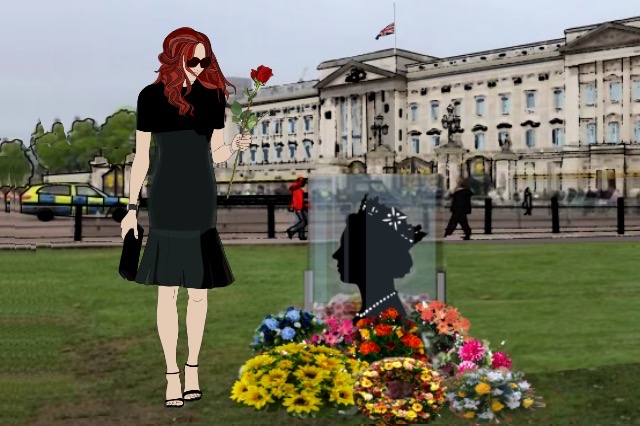 Mummy has been crying off and on since we got the news.

We’ve lost our beloved Queen and no amount of wishing is going to change that. And it’s what we all feared when her Platinum Jubilee was held at 70 years rather than 75. Judith (mummy) has been crying off and on since we got the news and I’ve done my best to keep from further upsetting her. I didn’t expect to find myself at my childhood home in St John’s Wood on this day but if I’m honest, I really did expect Elizabeth's reign to continue on forever. As Daddy said, we’ve known nothing else. She was queen when I was born in British Hong Kong and when my grandmother was said to have tucked a small framed photo of HRH into my pram.

Daddy has taken Judith to tea nearly every day, which has stopped her from watching the telly nonstop, and bracing when she sees Camilla. In the end I’m sure she’ll come round but for now she won’t accept Charles as our sovereign. Given how many have rung to ask her to clarify the rule, I believe she’s not alone. Canada, which still has the queen on its currency, opposes Charles succeeding his mother by 67 percent. A rather inauspicious start for the prince who has so valiantly fought for our planet. 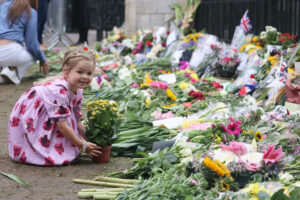 At your service, Ma'am.

Walking back from my first (and last) British Military Fitness Class I couldn’t help but notice a sea of brightly coloured cellophane. We were told it would not be the miles of flowers we saw at Diana’s death and that arrangements would be ‘sensitively moved’ to Green Park, but what they hadn’t addressed was the impact on our landfill. And in response I quickly organised tables with stewards to remove the plastic wrap so that the flowers could more easily be composted and replanted. I felt the queen would have wanted no less, and as we transition to a green-minded king, it was the thing to do.

I would have volunteered myself but I’d promised to take over tea-duty with Judith for today. She was in black of course and immediately told me that her single brooch was in good taste— having been her mother’s. And again reminded me that, ‘Your grandmother and the Queen were of an age’. As if I could possibly be allowed to forget. She also warned me that she wouldn’t be able to eat a thing. A warning that became less credible after devouring two plates of sandwiches.

We didn’t see anyone she knew but then one rarely does. And I was sure everyone she knew was still ringing the house to discuss the title of Queen Consort and dashed hopes of a morganatic marriage. Yet somehow, this was not an appropriate topic for our tea. Or so she said. I wanted to keep her mind away from her sadness but not so far away as to have to hear what I knew was coming:

‘Now Jennifer’ she began.  UGH! I motioned for another glass of champagne. ‘You do understand that once King… Charles can no longer involve himself in all your pet green projects’.

‘I thought you were putting a stop to that’ I responded.

‘I just thought it right, that someone say something to you—to break the news’.

‘That the Queen has died?’ I asked. 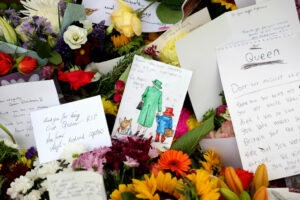 Take my hand, Mum. It will be all right.

She found that remark uncalled for and perhaps she was right but she really could be a pain, and this outing was for her benefit. The last thing I wanted right now was to be sitting for tea when I’d learned mourners were now leaving Paddington bears and marmalade sandwiches WRAPPED IN PLASTIC for the queen.

For a moment I wondered if Judith had read the note I penned to the new King Charles, urging him not to drop all of our good works, and to continue to be a defender of the planet, but in the end I think she was just trying to be a mother for a change.  In my letter to Charles I’d reminded him that he was possibly the most significant environmental figure of all time, and that he could not abandon Terra Carta… no matter anything! As prince he could act as a one-person NGO, but as king he would be constrained by the convention that the monarch should not interfere in the U.K.’s political decision-making, or take any overt political stance. I reminded him that the environment isn’t politics, it's life.

Many people feel that as Prince, Charles overstepped the bounds of constitutional monarchy, including his blistering attack on corporate vested interests.  But it has always been understood that this freedom would end as soon as he took the crown. So I believe it is important that he re-brand his stance—not as one of advocacy, but one of responsibility. Less focus on agenda, and more on serving the best interests of the country. 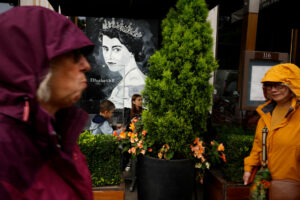 God save the king.

I explained that we have evolved as a country, and in time I believe he will be able to continue his lobbying at the highest political level, as he has done rather effectively with his black spider letters. And as the Tories have always been the conservators of the land there should be no risk of his agenda being seen as partisan or political… simply important. During his confidential weekly meetings with the Prime Minister he will be able to air his concerns over the environment and world climate.

When I got home Daddy handed me the paper, the headline read: 'World leaders to travel to Funeral by bus, commercial plane'. Surely he could not be serious. This was a mistake. ‘NO!’ I shrieked.

‘I thought you’d be happy to see this—it’s the green solution, smaller carbon footprint and all that’, Daddy said smirking.

Ugh! How does he not get this? Along with world leaders we are the ones saving the planet. We are the ones taking up this very important task. In the same way that failing corporations must pay more to attract top talent… we certainly should not be punished or dissuaded by making us fly commercial.

3 comments on “Diary of an Acclimatised Beauty: Mourning”