Diary of an Acclimatised Beauty: Making Do 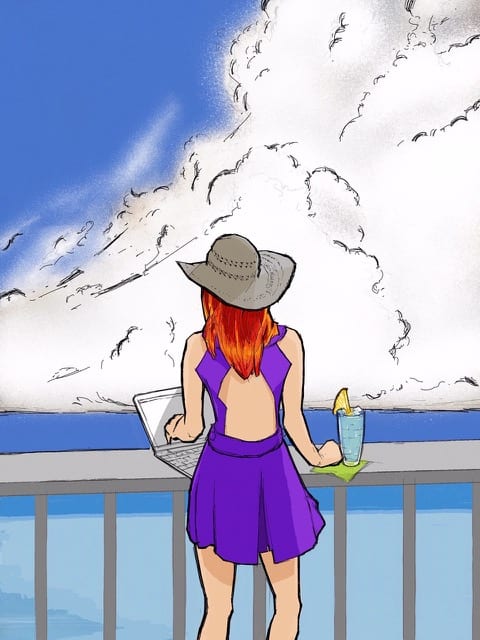 What is it about Hawaii that when you arrive it’s just that feeling of ahhh… I was so happy to be here even if there was no one to greet me, and no chance of the hotel sending a house car. They are on a skeleton’s skeleton staff. Gone too was the taxi dispatcher, the skycap and the cruise director herding midwesterners for a seven-day cruise around the Islands. One tiny Prius cab and a big “Aloha" from the driver, and we were off. En route we passed a gas station with prices just above the $2 mark?? How could this be? Do they save on transportation costs? No wait—never mind—there’s never any oil in places with volcanoes. Must investigate.

The upside of the end of the world proved to be the suite of rooms I was forced to take as they are technically closed and only private “apartment homes” were available. I’ll take my lumps as they come.

I cracked open my computer to get straight to your letters, dear readers. Stress and captivity are clearly taking their toll. It seems all this mask-wearing is causing break-outs when none of us can get to an aesthetician. Do not despair! We can solve this with things you already have on hand. Take equal parts of vodka and baking soda, mix together and apply as a mask directly on blemishes. For minor irritation take three bags of chamomile tea to one cup of water, steep for one hour and then use as a toner. But better yet, if you can, just avoid the mask altogether and use the vodka for its intended purpose.

One particularly galling aspect of this lockdown is celebs who can’t stop themselves from telling us “we are all in this together”. Firstly, most of us have only one home, and not a spare that boasts stables and a pool and a gym and an infrared sauna. For my part I certainly didn’t grow up wanting, but I also didn’t send out video blasts telling the masses I understood their plight atop an antique silk Louis XVI settee. And second, isolation by definition means we are most certainly not all in this together. I have only unkind words for these prats. Can’t imagine anything worse than getting seated next to one of them at a dinner, banging on about their great compassion. Equally offensive, and yes, I’ll leave her name out as well, is a friend of my mother’s—posting daily videos of her girls cutting up every measure of designer clothes from which to make crafts. Oh aren’t they absolutely brilliant to use only what they have in quarantine? Yes, brilliant. Absolutely.

Catching up on other emails, I was disappointed to see that coronavirus killed Earth Day, or at least the Earth Day climate protests in Washington. And I was especially distressed to read the very, very sad tweets of one of my clients—whose very existence is linked to fighting climate change. I’d just tweeted my heartfelt condolences when I realised how stupid I sounded lamenting the fact that a billion climate-change activists didn’t travel to lament climate change. So I took down the tweet and it will stay down until I can sort through the correct response, but it rather reminded me of the days when I questioned Al Gore’s globe-trotting crusade against his fellow man’s carbon footprint. Maybe my part in all this should be promoting virtual-only events? Thinking.

Thinking (and drinking) is about all I’ve been doing under Corona’s scorching umbrella,  which doesn’t make for the clearest head but what else would I be doing in the land of blue cocktails? I was trying to work out whether there's more fruit in sangria or a pineapple flirtini. Conclusion: Americans are very confused about the purpose of a cocktail.

As for other confusions… I don’t know where to start on the beach closures…The department of land or some such thing said, “It’s currently against the law to walk or run on state beaches.” But only five beaches are state beaches. Except then the Governor said “all beaches are closed” and made it clear he “did not say no walking or running!” (on the very beaches he already said were closed). But state officials clarified that walking and running on beaches is illegal, even though the Governor made clear he didn’t say no walking or running. And then further explained this to mean “no sitting, no standing, no lounging, no sunbathing, and no loitering on beaches and sandbars”. Is a sandbar also a beach?

It’s just as well I stay off the sand… not like I can get a pedicure anyway. So my fitness of choice is dancing around the suite to Katie Earl’s 'Tongue Tied', with no one above me and no one below me; no complaints, and no citations. Mahalo!

3 comments on “Diary of an Acclimatised Beauty: Making Do”