Diary of an Acclimatised Beauty: Eventing 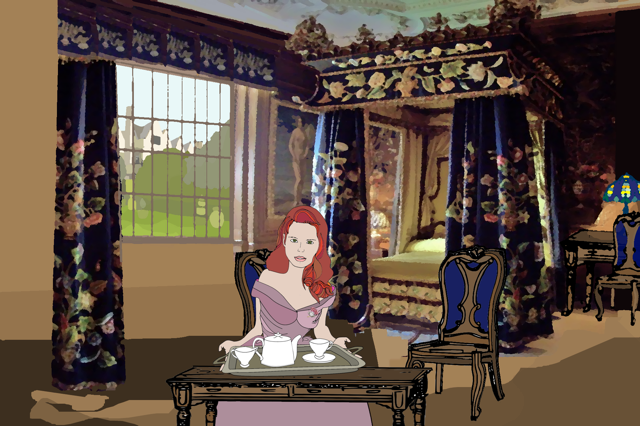 I’m back in Jolly old England as I’m meant to be setting up a mega-conference for the client that Daddy has mockingly dubbed ‘The Green Baron’. ‘Baron’ because we’ve reached tera-cap status and ‘green’ because we are working to be carbon neutral by 2040. He thinks it’s all rather hilarious. Daddy is indeed proud of me for landing such a client, but also reminded me that the company’s carbon footprint just breached 60 million metric tonnes.

Travel from the states back to the UK was a bit of a mess and I don’t think I should make it known—but with all the inspection of my vaccine status, and latest PCR tests, the customs agent didn’t even crack open my passport. My sad, dark blue post-Brexit booklet just lay under his nose until he scooped up the lot of it and handed it back to me. And so many questions as to whether I had a headache or had felt ill in any way... I really felt I should have been given a lolly as my doctor used to do. The most ridiculous bit is they won’t give you a seat until you are cleared by the medical inquest. So while I can feel sure that no one on the plane has a headache—a valid visa cannot be assured. And it all feels very much like school… being told at the last minute where I am to sit. It’s not such a big deal when one has her own pod but for the people on the other side of the curtain… well, boo.

The flight was pleasant enough but once we landed—the party was over. Heathrow is not nearly as empty as it was a year ago and the line for people who were transiting was madness. And what was the point? They were already in the building. I had weighed the prospect of taking the train to Peterborough but decided not to bill for the four hours it would take by rail versus under two in a town car. Hard to know which gesture my client would appreciate though. 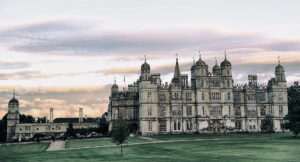 And just like that, I was back in the glorious England of my childhood. I’m well-familiar with Burghley House, having come here so many times as a girl with my parents to watch the annual Burghley House Horse Trials, and then much later as a competitor. The house itself is probably the finest example of an Elizabethan prodigy house but this is the first time I’ve actually stayed here. It’s not open for guests and my previous forays had been as part of a tour, or as a party guest in connection with the horse trials and my Olympic participation.

It was here, on the grounds of the estate that I learned to be truly brave and attacking in competition. It is the world’s greatest five- star equestrian event and the ultimate goal for every rider in the world. But as a Briton, one genuinely feels they are fighting for queen and country. Sadly this year, and last, queen and country shut us down for the dreaded Covid, which never made any sense to me as it’s an outdoor event and the horses are regularly treated with Ivremectin. A colossal loss of revenue for all involved, but now an opportunity for us.

Right off it became clear that nearby lodging was going to pose some logistical complexities. Specifically loads of buses and private cars to ferry people to the various events, and that was after we’d all made our way from London. I could feel the green meter ticking but I was determined to make this work and reminded myself that it would provide less impact and congestion than the annual event. Especially given we wouldn’t be bringing in horses. OK, granted the non-horse bit was entirely lame but I did feel the need to craft arguments in support of our green conscience. And with that I began to second-guess my suggestion of Burghley House in the first place. The property, however, was doing all it could to sell me on the idea so I could in turn sell it to my boss. What I needed was an inducement. Or divine inspiration. 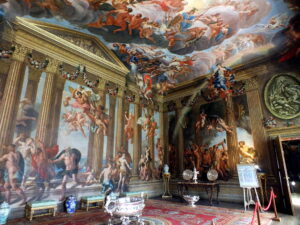 This must be Heaven.

I walked down the corridor to stare up at Verrio’s Mouth of Hell and then onto his masterpiece… Heaven, which was both magnificent and grotesque. The fat-bottomed gods and goddesses, while magnificent, gave no clues except to seemingly say, please don’t bring a bunch of loud Americans to fix their gaze upon every bare baroque breast and penis. Noticing a lion that had been clubbed to death, I went back to my room to ring my father.

He greeted me with, ‘Congratulations!’

‘Thank you Daddy’ I said, ‘but you knew I landed this job months ago.’

‘Indeed, but since then you’ve eclipsed both big tobacco and big oil in lobbying expenditure—nearly doubled actually.’

‘Well that is big news.’ I said, steeling myself for what was coming next. ‘Listen, Daddy, I’m here in Burghley House…’

‘Yes, one and the same, and I’m trying to find a way to bring a huge event here without… well, you know.’

‘Why not invite that sickly little Swede? You could call the event…HOW DARE YOU!’

‘I’m serious, Daddy! I feel awful. I’m nearly in tears. I walked the grounds and I honestly don’t want to bring one more human to this celestial place.’

‘Then ask your boss to write them a check for £100M… if you’re serious that is. That should offset your carbon guilt.’

‘Ah but he will. Because soon enough he will have his eye on Cambridge City Airport, which is slated to close to build several thousand homes. Which of course is madness because more homes would mean more goods needed, thus creating a need for an even larger shipping hub. And if he hasn’t realised this, you should suggest it to him—along with your carbon guilt money.’

I was gobsmacked. He had solved my problem— but had he?

‘Listen, Jennifer—I have to figure out what your mother’s got up to but we’ll be home later,’ he said and rang off.

I now felt guiltier than ever. But I was a genius… stuff the homes somewhere, and build a mega-hub—which clearly we need. And a whopping check for the estate. Best not call it carbon guilt money though...

2 comments on “Diary of an Acclimatised Beauty: Eventing”