Like the coronavirus, which seems to disproportionately injure African-Americans and other minorities, "climate change" appears to be fundamentally racist. Regarding the Wuhan bug, don't take my word for it -- Al Jazeera, NPR, and the BBC all sing ecumenically from the same hymnal:

This is pure racialist bilge, of course, deriving directly and selectively from the cultural Marxist notion of "proportionality" that has come to infect almost every aspect of our public policy thinking, from "disparate impact" in housing and labor issues (a tendentious derivative of the Civil Rights Act of 1964), to Title IX sex discrimination (from the 1972 Education Amendments Act) to the current shibboleths of "diversity" and affirmation action. It ignores, for example, the very real differences among ethnic groups regarding susceptibility to certain diseases -- Tay-Sachs disease among Ashkenazic Jews, skin cancer among the Anglo-Irish, sickle cell anemia and hypertension among blacks. On the Left, however, the only possible explanation for any racial disparities in any field whatsoever is racism -- except of course, when it comes to sports. A predominantly black NBA or an overwhelmingly white NHL are, at least for now, perfectly fine.

As has become clear, the collectivist Left has decided to conflate the Wuhan virus with their overall fascist fantasy of "climate change," and now regard the unconstitutional lockdowns and other restrictions on personal autonomy and freedom as a dry run for what's to come next. "Progressives" regard the de facto outlawing of communal religious services, for example, as an unalloyed good -- not because it "flattens the curve" or saves lives, but because the abolition of religion has been a mainstay of their political philosophy since at least Rousseau and, latterly, Marx. So it's no surprise they've racialized something as impersonal as the Wuhan virus in order to continue their ur-Narrative of Western social racism and economic exploitation, and are now connecting it to "climate change" via the Rousseauvian myth of the noble savage:

When the wildfires hit Australia last year, Bee Cruse was horrified at the sight of the red sky, the black ash falling like snow, and the smoke choking the whole East Coast. The fires were a direct reminder of the British genocide against Aboriginal and Torres Strait Islander people like her, and the tearing of them from country and their traditional ways of land management.

In an article for Vox, Cruse, a Wiradjuri, Gomeroi, and Monaroo-Yuin storyteller, told me, “We see and feel the spirit of our animals and our land; they are our ancestor spirits. We don’t own country, country owns us; we come from her to protect her. When country hurts, we hurt. When our animals, our spirit cousins, cry, we cry.”

What Cruse was describing was climate grief, a psychological phenomenon that affects Black and Indigenous peoples, and other people of color, in uniquely devastating ways.

This sort of thing used to be called superstition, but we're too sensitive for such blunt talk these days.  The whole corpus of Western civilization, from its art to its faith, to its sciences, is now being called into question by an alien philosophy of nihilism imported from central Europe, which elevates relativism and a bogus egalitarianism above all else. If all cultures are equally good (objectively impossible), then why shouldn't we heed the animal spirits? 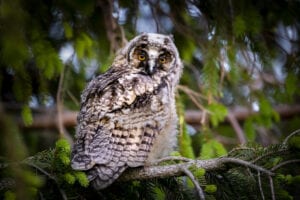 What's new today is not connecting primitivism to moral virtue but to take the principle of egalitarianism to the next level, and argue that true egalitarianism means that not only are some people simply more equal than others (Orwell roasted that concept in Animal Farm) but are, in fact, superior. As British historian Tom Holland illustrates so convincingly in his recent book on Christianity, Dominion, much of the atheist Left's credo is derived directly from Christianity ("the last shall be first"); my addition to his refreshingly apolitical argument is that it's now being used as a club against the genuine article.

Those paying attention have long seen this coming: it's the notorious Rule No. 4 of the Marxist agitator Saul Alinksy, mentor to both Hillary Clinton and Barack Obama: "Make the enemy live up to its own book of rules. If the rule is that every letter gets a reply, send 30,000 letters. You can kill them with this because no one can possibly obey all of their own rules." La Rochefoucauld's famous observation that "hypocrisy is a tribute vice pays to virtue," becomes clear when viewed in a religious context, since otherwise there would be no need for hypocrisy were it not traveling under the cloak of Christian virtue.

Just as we are seeing with the COVID-19 outbreak, environmental racism forces people of color, especially Black and Indigenous peoples, to bear the brunt of global disaster. We are not only disproportionately affected by the climate crisis—breathing in more pollution, living in communities with higher temperatures, suffering from more medical conditions, experiencing more natural disasters, and being displaced at much higher rates—but we carry the pain of the climate crisis deep inside us.

Since the earth's population is disproportionately "non-white," and most people live in what we used to call Third World countries with the attendant substandard levels of hygiene, waste disposal, and medical technology, this is exactly what one might expect; it's not a plot, it's a result. Now throw in hand-me-down notions of Freudian psychology exported from Vienna to the Outback, you have a concatenation of neo-Marxist resentment:

In its 2014 report, Beyond Storms & Droughts: The Psychological Impacts of Climate Change, the American Psychological Association (APA) found that the climate crisis was affecting human mental health across the globe. Anyone can experience climate grief, regardless of their identity. But for us, our grief—and our anger—is rooted in centuries of painful history, and the current ecological violence hurled at our communities.

“Just like other stressors that people of color experience, ecological grief is often magnified,” said Dr. Tyffani Dent, a licensed psychologist and author, in an interview. “People of color know…society is going to make sure we’re impacted first, and impacted the hardest,” Dent said.

You can see where this argument is heading: the world would be much better off without the Age of Exploration, the Industrial Revolution, fossil fuels, and electricity, and the medical breakthroughs in the treatment of infectious diseases; in short, the Third World would prefer to live without the ministrations of the Renaissance and its cultural successors in the West, minus Marxism. And thus in savagery, in the sense of "primitivism." So out with the lot of it:

Xiye Bastida, a youth climate activist, a member of the Indigenous Mexican Otomi-Toltec nation, and an organizer of Fridays for Future, says that her climate grief is deeply tied to her Indigenous identity. “For Indigenous people, climate grief comes from when they’re first displaced by fossil fuel companies, by drilling, by fracking infrastructure that makes Indigenous communities be moved from their place of origin, their place that they have a relationship with. (Our) relationship with the land is the first thing that we care about,” Bastida said.

For Black and Indigenous peoples, you could argue that the history of our oppression is the story of the Anthropocene itself—the current geological age defined by the dominant influence that human activity has had on mass extinction, climate, and the environment. Without colonization, the trans-Atlantic slave trade, and the genocide and oppression of Indigenous peoples around the world, we likely would be living in a different reality.

That's for sure. But the current trend in historical "scholarship" -- as evidence by the absurd "1619 project" of racial grievance and historical revisionism recently published by the New York Times -- is not enlightenment but revenge:

Research has bolstered the idea that white supremacy has led to the climate crisis. Scientists from University College London found that the mass genocide that accompanied the colonization of the Americas in the 15th century permanently altered Earth’s climate, due to “a huge swathe of abandoned agricultural land” that “pulled down enough carbon dioxide from the atmosphere to eventually chill the planet.”

Ravenous for the mass production of lucrative commodities such as salt, cotton, and sugar, the slavemasters and colonists stripped the land in what’s now known as Canada and the United States, the Caribbean, and South America, murdering countless Africans and Indigenous peoples along the way. Worldwide, the memory of indescribable racial terror informs the climate grief of our people.

Of the brutal savagery of "indigenous peoples" like the Aztecs pre-colonization -- which included human sacrifice and cannibalism -- nothing, of course, is said. And when such peoples got their hands on the conquistadors, the violence was horrific. But that is human nature, as red in tooth and claw as Nature herself.

There's much more to this absurd essay, but it does illustrate just how deeply cultural Marxism has penetrated Western thinking, and how open we are now to prima facie ridiculous notions of our own villainous complicity in a plot that must have started very, very long ago indeed. The history of civilizations indicates that all things must pass, from the Roman Empire, to the Incas of the Americas, to the the Islamic Mughals in India, to the U.S.S.R. All the Third World has to do is wait, and all will be well again.