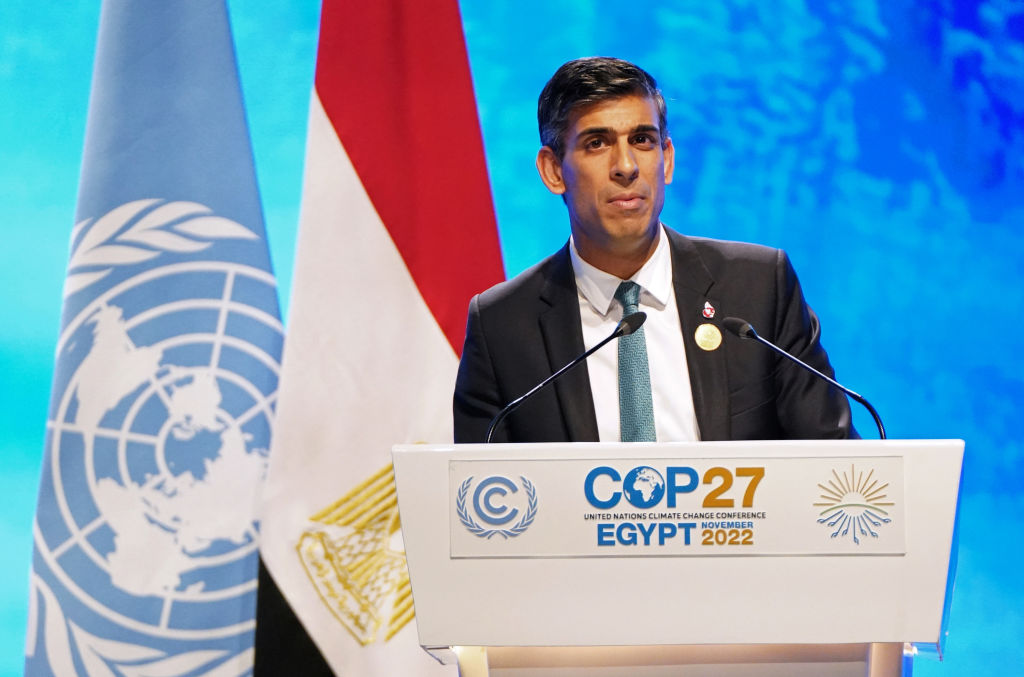 That was then, this is now.

For a brief moment Rishi Sunak, Britain's new prime minister, looked as if he might resist joining the rush over the cliff of climate catastrophism. Initially he decided not to attend the COP27 "climate change" summit in the former Israeli (now Egyptian) Sinai peninsula resort town of Sharm el-Sheikh on implementing the U.N.-brokered plan to cut the world’s carbon emissions to Net-Zero by 2050. Then he said his mind was open to going. Finally he went.

My interpretation of his early reluctance was that he didn’t want “to be trapped into making commitments on Net-Zero that might later be inconvenient to his overall energy and budgetary policies.” If so, that was a very prudent judgment. And to be fair, the Prime Minister resisted a great deal of political and international pressure to stick to it. Then Boris Johnson, his predecessor, announced that he would be attending the climate jamboree. That proved to be the last snowflake that triggers the avalanche. Rishi felt he had to go. 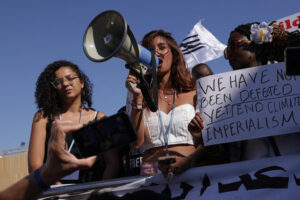 Even on the day before he set off to Egypt, however, it became clear that his initial prudence was as amply justified as it has been brutally violated. Consider the back story of Britain’s finances. And pay attention because recent news stories may have given you the impression that the short unhappy episode of Liz Truss as prime minister was responsible for the dire straits of Britain’s fiscal situation that includes a budgetary “black hole” of 50 billion pounds, a proposed set of tax hikes amounting to 25 billon pounds, and spending cuts of about 35 billion pounds.

In reality both Ms. Truss and her chancellor, Kwasi Kwarteng, are entirely innocent of this Mother-of-All-Shortfalls. They were in office only about a month, and none of their proposed tax-and-spending changes were even introduced in that time. When they left office, they bequeathed to their successors the same exact inheritance of fiscal and monetary problems that they had inherited. Those problems in turn were the results of the massive expenditures on Covid-19 and the lockdown, of the stay-at-home rules that have shaped a workforce that today refuses to go to factory or office, and of the quantitative easing that built up a monetary backlog that is now emerging in rapid inflation and high interest rates.

And who is responsible for all those? No one more so than the former chancellor, Rishi Sunak, unless you count his prime ministerial boss, Boris Johnson. They’re starting to look like a tag-team trying to win the race to insolvency before any other national team. And they have jointly taken a giant’s leap forward towards that result by their speeches and, yes, their commitments at the COP27 Summit. 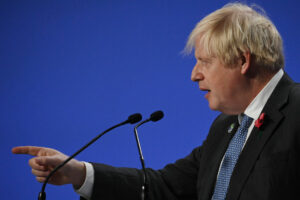 Having pushed Rishi into going, Boris then gave a speech to the summit that pushed his former colleague further into massive financial transfers from the U.K. to developing countries. He did so by making the case that Britain was historically responsible for global warming because it had invented the industrial revolution:

The United Kingdom was one of, if not the first, industrialized nation. The first wisps of carbon came out of the factories and mills and foundries of the West Midlands 200 years ago. We started it all.

Historically speaking, that was nonsense. Even if you think that man-made carbon emissions are the sole cause of "climate change"—which is not the scientific consensus—Britain put extremely small amounts of carbon into the atmosphere for the first two hundred years of the industrial revolution. "Global warming" began in the 1970s, after the spread of modern industry around the world. Nor is it remotely true, as the leftist theory bizarrely embraced by Boris holds, that the industrial revolution was a privileged blight from which Britain and the early industrialized world derived all the benefits while the developing countries got none.

Quite the contrary. Among the benefits it brought to the whole world were modern medicine that eradicated entire diseases like smallpox and cured almost all the transmissible illnesses known to mankind; modern agricultural methods that ended famines and alleviated hunger and malnutrition; and new industries that lifted billions of people out of endemic poverty, increased living standards worldwide, and extended life expectancy well beyond “three score years and ten.” Any cost-benefit analysis that weighs those benefits against the costs of "climate change" would have to deliver a favorable verdict for the industrial revolution, which is why developing countries are all anxious to proceed with their own local versions of it.

Boris himself must have realized that he had just opened a Pandora’s Box full of prospective U.K.-financed transfer payments of incalculable expense to Africa and Asia. For he immediately tried to evade the responsibility he had just conceded by giving it a gloss of technology:

What we cannot do is make up for that in some kind of reparations. We simply do not have the financial resources. No country could. What we can do is help with the technology that can help to fix the problem.

But that realism was too late, as realism usually is for Boris. Leaders of the developing world were soon in full cry demanding the “implementation” of these and earlier promises from Western leaders. Negotiators for the U.K. and its G7 allies in the corridors and back rooms of COP27 were signaling that they were prepared to concede more money for “loss and damage” funds—a bureaucratic term of art now morphing from emergency disaster aid into reparations in disguise. And the bandwagon began to roll. 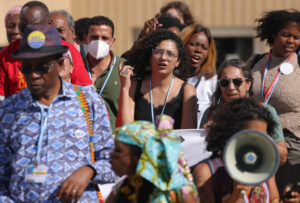 The Camp of the Saints awaits the West.

By the time that Rishi Sunak stood up to give his address only hours after Boris, he had conceded a moral responsibility to assist poorer countries to transition to a carbon-free world without actually using the word reparations. But he said that the U.K. would deliver its full pledge of 11.7 billion pounds from previous COP summits and—though vaguely—much more than that.

The bandwagon was picking up speed. But that's the purpose of COP climate summits. Once you’re at one, you can’t say nothing, and if you say something, it can’t be "no."

11.7 billion pounds too is an interesting figure—slightly more than one-fifth of the amount of money needed by the current U.K. Chancellor to fund the existing budgetary black hole in the nation’s finances. One doubts if the prime minister really wants people to remember it in ten days when the chancellor delivers his punitive tax-and-cut budgetary statement. That may explain why the government briefing of the U.K. press in Egypt, to judge from the next day’s headlines, switched from celebrating the U.K. taxpayer’s generosity at COP 27 to hailing an as yet uncompleted deal (originally embarked on by then-PM Liz Truss) for the U.K. to buy lots and lots of natural gas from the U.S. to keep Britain warm this coming winter.

As Rishi Sunak reflects on all this, he may remember uneasily an old WWII poster, revived for the Covid lockdown: Is your journey really necessary?

One comment on “Boris and Rishi Buy the Pyramids”