AGAINST THE GREAT RESET: 'The Anti-Industrial Revolution'

For the next three weeks, The Pipeline is presenting the remaining excerpts from each of the essays contained in Against the Great Reset: 18 Theses Contra the New World Order, which was published on October 18 by Bombardier Books and distributed by Simon and Schuster, and available now at the links.

Excerpt from "The Anti-Industrial Revolution" by Martin Hutchinson

The World Economic Forum’s Great Reset is a major revision of the economic policies that have pulled humanity to its present state of modest prosperity. Its central premise is captured by the epigraph: “You’ll own nothing and you’ll be happy.” But ownership is what divides modern free men and women from medieval serfs—without it, we are subject to the whims of our masters and unable to fashion our destiny. The Great Reset not only resets our social status, but also, over time, it will reset our living standards to those of our serf ancestors.

The WEF, based in Switzerland, aims to create a Fourth Industrial Revolution; apparently, electrification and computers were numbers two and three. (As an old-fashioned sort, I prefer to think there has been only one Industrial Revolution, which is still ongoing, and that subsequent technological advances are developments of the original leap forward, which unlike its supposed successors, was not a mere technological add-on to previous progress, but a paradigm change in humanity’s destiny.) The Covid-19 pandemic was the pretext for the group to call for a “Great Reset,” in which governments can change the conditions of economic life so that the WEF’s own policy preferences are favored. As President Barack Obama’s first chief of staff Rahm Emanuel said in 2009, “Never let a plague go to waste.”

According to Schwab and Malleret: “to achieve a better outcome, the world must act jointly and swiftly to revamp all aspects of our societies and economies, from education to social contracts and working conditions.”

Schwab’s Great Reset agenda has three main components. First, it “steers the market towards fairer outcomes”—Schwab  and his cronies deciding what is fair. Second, the Great Reset agenda ensures that investments advance shared goals, such as equality and sustainability. (There appears to be no provision for those of us who do not share these goals.) The third priority is to “harness the innovations of the Fourth Industrial Revolution to support the public good, especially by addressing health and social challenges.” 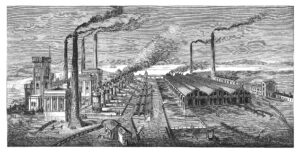 The one and only.

Clearly, the Great Reset agenda has little in common with conventional market capitalism. To highlight the differences, I will compare its approach point by point with the policies that gave Britain the original Industrial Revolution—the most comprehensive advance in human civilization since the invention of agriculture, and with more unequivocally positive effects on living standards. I shall demonstrate that in almost all areas, the Great Reset advocates the opposite of those policies. It then seems inescapable that it is likely to produce the opposite results, in other words, an Anti-Industrial Revolution, in which human economic progress in living standards goes into reverse.

Individual Freedom
The Industrial Revolution occurred in Great Britain between 1760 and 1830,13 although its roots go back a century earlier, to the entrepreneurial outward-looking society that arose in the Restoration period after 1660. That society differed from all Continental societies of the period (except the Netherlands) in one overwhelmingly important
respect: almost all its people were fully free. That freedom derived from the period after another pandemic, the Black Death.

Nearly three hundred years before the Black Death, the Norman Conquest had sharply compromised the living standards and embryonic freedoms of the indigenous Saxons. The Normans appropriated the large landholdings, exterminating almost all the Saxon nobility, and then imposed the more severe French version of feudalism on the remainder of the indigenous population. In consequence, most of the Saxon population existed in an unfree status for the succeeding centuries, each member providing labor and possibly military service to their feudal lord and receiving no cash compensation for doing so. As England became more settled and its wealth increased, more land was cleared and cultivated. However, population increase among the serfs kept them mired in serfdom, even though the nonrural sectors of the economy were developing a cash economy with free exchange.

Then the Black Death happened, wiping out at least a third of the population. The result was a severe labor shortage, combined with a decline in food prices since there was no longer enough labor to cultivate all the available land. In response, the upper classes that controlled Parliament passed the Statute of Labourers 1351, prohibiting working men from demanding higher wages. These restrictions were initially effective, but over generations, with people moving, new employers emerging, and new job types appearing, they became a dead letter—the “Peasants’ Revolt” of 1381 and other labor unrest were symptoms of the ex-serfs asserting their new autonomy. By the fifteenth century, the restrictions had effectively disappeared—the descendants of the serfs freed themselves and worked for the much higher wages now available. This period was in retrospect known as “Merrie England.” For the ex-serfs, if not for their former masters embroiled in the Wars of the Roses, it was indeed Merrie!

This liberation happened across Europe at this time for similar demographic reasons, but England and the future Netherlands saw workers liberated more fully and permanently than in France, Spain, or the Holy Roman Empire. Thus, even though living standards declined again with increasing population after 1500, the greater freedom of English labor, maintained even through the impoverished early seventeenth century, was an important contributor to the Industrial Revolution.

The freedom of labor in eighteenth-century England was not simply a matter of its working status. English law had always restricted the central power—we find a detailed description in Sir John Fortescue’s 1470 “The Difference Between an Absolute and a Limited Monarchy” of how the English monarchy was bound by the law, rather than absolute like the French one. The Civil War and the Interregnum, together with the legalism of the seventeenth century and the 1689 Bill of Rights established English legal freedoms of the individual as a bedrock constitutional principle. Consequently, English working men were free to move about the country, provided they could support themselves—only the 1601 Poor Law, which provided a minimal subsistence for the indigent on a parish basis, forced those who could not do so to return to their home parishes. They were also free to work in any occupations they chose and to make any arrangements they could negotiate with their employers.

These freedoms were essential to the genesis of the Industrial Revolution, and a leading reason why it happened in Britain and not elsewhere. The Holy Roman Empire, for example, however full of industrious and well-schooled German engineers, was still bedevilled by serfdom and feudal obligations in the eighteenth century because the Thirty Years’ War had reimmiserated much of its populace. Consequently, German industrialization was almost entirely delayed until after 1850.

The WEF in its report exhibits attitudes about ordinary consumers that would not have been out of place in a thirteenth-century donjon. Some allowance must be made for the report having been written in June 2020, but in discussing the Covid-19 outbreak, it rejects indignantly the idea that closing down the economy might cause misery, noting smugly “Only saving lives will save livelihoods,” quoting the efficacy of masks and restrictive regulations. The divergence in U.S. unemployment rates in 2021 between Republican-run states that generally reopened early and Democrat-run states that stayed locked down demonstrates that lockdowns indeed imposed additional misery and doubtless additional lives lost.

The report’s contempt for the man in the street shows itself elsewhere. Consumers are “obsessive” about inflation, we  were told, before we were reassured that “it is hard to imagine how inflation could pick up anytime soon.” The report also sought to establish a “global strategic framework of governance”—guess how much democratic input there will be into that!

The report also urged replacing GDP—the statistic that reflects the overall output of the economy—with a “doughnut” whereby the inner ring would represent what’s needed to sustain the “good” life and the outer ring what the environment can support. Naturally, governments and institutions such as the WEF would determine what the “good life” consists of and precisely how much the environment could support and would engage in redistribution within the doughnut to ensure that the good life was shared by all and that the environment was protected. Individual consumers would have no say in the matter—nor would they have any right to squawk as the doughnut got thinner and thinner with all the redistribution and environmental costs until the “good life” proved to be unattainable without wiping out half the world’s population.

However, the most consumer-unfriendly and freedom-killing section of the Great Reset is its glee over contract-tracing applications on cell phones, which it describes as an “unprecedented opportunity.” We have already seen what this leads to in Britain, where huge numbers of the population have been forced through the government’s Test and Trace software to self-isolate for a week or more, without any symptoms or other evidence that they are infected what with widespread vaccination is generally a mild or even undetectable disorder. We have also seen the Chinese “social credit” system, enabled by cell phones, that allows an authoritarian Communist state to control its people and weed out dissidents.

Since learning this, I have several times blessed the grouchy elderly Luddism that has caused me to reject getting a cell phone over the last decade...

Next week: an excerpt from "The Great Reset and 'Stakeholderism'," by Alberto Mingardi.

Against the Great Reset

AGAINST THE GREAT RESET: 'Dueling Faiths: Science and Religion under the Great Reset'

AGAINST THE GREAT RESET: 'History under the Great Reset'

AGAINST THE GREAT RESET: The Great Reset and 'Stakeholderism'

One comment on “AGAINST THE GREAT RESET: 'The Anti-Industrial Revolution'”