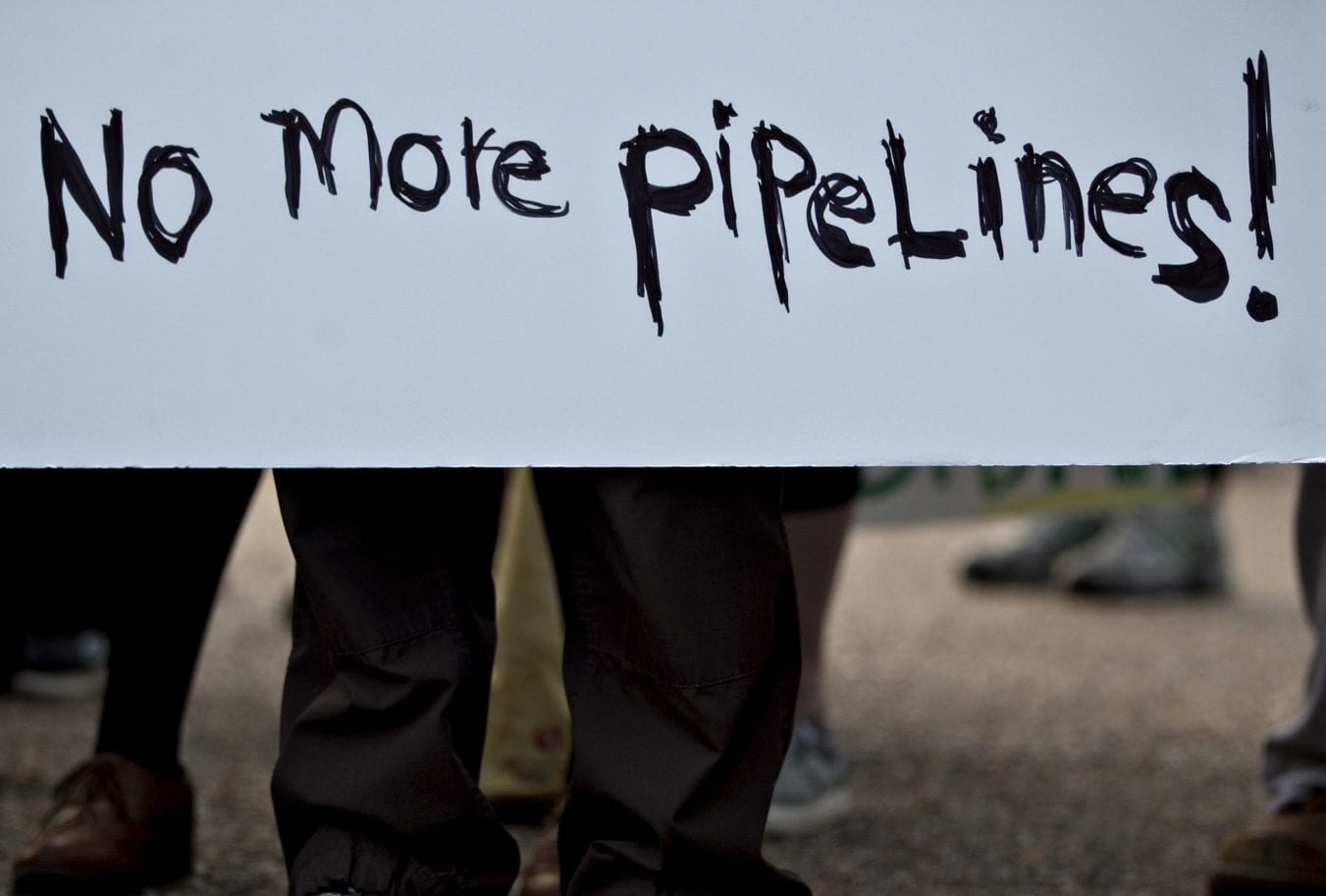 For nearly two weeks now, environmental activists across Canada have been blockading roads and railway lines all over the country. CN rail, Canada's largest freight railway company, have announced that they are shutting down their Eastern operations, leading to a serious risk of goods shortages in Eastern Canada and to 450 workers being laid off. Passenger train crown corporation VIA Rail followed suit, cancelling their passenger services across the country, inconveniencing nearly 100,000 people over the holiday weekend.

What is it that has these activists so up in arms that they are are willing to cause so much disruption throughout Canada? Nearly all of the press reports I've read offer an easy answer:

[CN]'s operations have been held up since last week by protests near Belleville, Ont., and New Hazelton, B.C., done in solidarity with B.C. Indigenous leaders who oppose the Coastal GasLink natural gas pipeline through their territory.

And another from the Toronto Star:

Protests in solidarity with the hereditary chiefs of the Wet’suwet’en First Nation have sprung up across the country as demonstrators show support for Indigenous leaders in northern B.C. who oppose construction of the already-approved Coastal GasLink pipeline. While all 20 elected First Nations band councils from the region have signed benefit-sharing deals connected with the project, hereditary chiefs of the Wet’suwet’en have claimed the pipeline can’t proceed through unceded traditional territory without their consent.

And another from the Montreal Gazette:

Blockade organizers across Canada have said they’re acting in solidarity with those opposed to the Coastal GasLink pipeline project that crosses the traditional territory of the Wet’suwet’en First Nation near Houston, B.C.

If you are a casual reader of the news,  you might think that that's all pretty straightforward. The Coastal GasLink pipeline, which has been approved by the Liberal Government in Ottawa and the socialist NDP government in British Columbia (where it is being built), has run roughshod over the wishes of the local native population, and people of good will across Canada are standing up for them.

Except, that that is not at all what is happening, as Mike Smyth explains for B. C.'s The Province:

The First Nations directly impacted by the Coastal GasLink pipeline — and the thousands of Indigenous people they represent — largely support the project. All 20 First Nations along the pipeline route have signed benefit-sharing agreements with the pipeline company through their elected band councils. That includes the multiple elected councils of the Wet’suwet’en First Nation.

But the protesters have aligned themselves with five Wet’suwet’en hereditary chiefs opposed to the pipeline, and not the 13,000 Indigenous British Columbians represented by all the band councils that support it.

He goes on to sharpen the point a bit:

It’s an especially inconvenient fact for pipeline protesters who say they are blocking roads, bridges, highways, train tracks and public buildings in solidarity with Indigenous people.

They sure aren’t representing the Indigenous people working on the pipeline. Of the 1,000 people currently employed by the project, about one-third are estimated to be First Nations. If the blockaders get their way, they would throw hundreds of Indigenous people out of work. That’s some “solidarity.”

Stewart Muir of Resource Works, an independent organization which reports on issues involving British Columbia's resource sector, has been on the ground in B. C. talking to locals, especially members of indigenous groups actually effected by the pipeline and these protests. Muir's interviews with these people - which are being posted on Twitter and Facebook - are invaluable for understanding what is really going on there.

One person who Muir spoke to is Troy Young, a member of the Hagwilget Village First Nation, part of the Wet’suwet’en Nation, who manages an Indigenous-owned company working on the Coastal GasLink pipeline. Young is clearly bothered by protesters across Canada interfering with a Native issue:

It would be appreciated and respectful to our culture if people would leave us to our own devices. The traditional way of doing things is to meet in our feast hall, have our discussions, and then make an internal decision, and let people know.

He goes on to voice his frustration with the five dissenting chiefs, who are "choosing to do everything via media and not following proper protocol."

Young also points out that the protesters are ignoring the benefits the pipeline will bring to First Nations communities:

Against everything they're saying, the protesters, typically if people are employed, drug use goes down, because people are happy when they're making money, they feel better about themselves. They feel more confident.

He's particularly concerned about what the success of the protesters would mean for First Nations employment opportunities: "If the project were to be halted, the loss would be probably insurmountable. Nobody's ever going to invest here again."

"There's a lot of people out there that don't even belong from Witset, and they're kind of ruining our names... making us look bad.... If they're not from Witset, if they're not natives from our village, they shouldn't even be involved in what's going on."

And from Phillip Tait, a resource worker also working on the pipeline:

"I'm just a regular guy, I want to work. This project is going to have, what, 10,000 employees. Now if we interrupt one little part of it, its going to disrupt the whole line. And... 10,000 people is a lot of families and businesses that are going to be effected."

All of which is to say that once you're on the ground it becomes pretty clear that, contra the standard media narrative, the protesters don't speak for the Wet’suwet’en.

So who are they, and what, exactly, do they want? Is it really possible that many thousands of protesters have gathered in cities and blockaded train lines across a nation as large as Canada without coordination or serious funding? It isn't difficult to find allegations online that many of these protesters are being paid, perhaps by American environmentalist groups who feel that they get more bang for their buck in Canada than they do in the US.

These questions warrant further investigation. Even so, the protesters remain a familiar type with familiar motivations. As Rex Murphy put it, they are "the anti-industry, anti-energy, anti-Alberta, climate-change save-the-worlders who have been harassing the country for years."

Val Litwin, president and CEO of the BC Chamber of Commerce, adds

What is the ultimate goal of the non-Indigenous groups involved in #ShutDownCanada? They make no attempt to hide their desire to keep resources in the ground and development from happening. But at whose expense? In so doing, they are hurting the very people they purport to represent — the thousands of working men and women (both Indigenous and non-Indigenous) who rely on development to put food on the table, who want to feel safe and secure in their ability to provide for their families, and who want to see their communities move collectively toward a more prosperous future.

As protesters have been blockading roads and railway lines across Canada, Prime Minister Justin Trudeau has been traveling across Europe and Africa campaigning for Canada to be given a seat on the UN Security Council. With criticism mounting - Opposition Leader Andrew Scheer issued a statement saying that the government's non-response had emboldened "radical activists" with "no connection to the Wet’suwet’en people" - Trudeau announced that he would be cancelling his planned trip to Barbados and coming home for emergency meetings on the situation. Though, after Scheer mocked the P. M.'s call for "dialogue" as "the “weakest response to a national crisis in Canadian history,” Trudeau announced that Scheer would be excluded from those meetings, saying "Mr. Scheer disqualified himself from constructive discussions with his unacceptable speech earlier today," a childish response, which likely betrays how seriously he takes this situation.

The inconvenient fact for Trudeau, however, is that Scheer is exactly right, and ordinary Canadians are taking this extremely seriously. Despite the Canadian media (with a very few exceptions) acting as unofficial P.R. reps for the protesters, a new poll shows that nearly two-thirds of the country oppose them. They are beginning to see what has been clear from quite early on, which is that the protesters - whoever they are and wherever they come from - are using Canadian First Nation groups as a shield for their own Environmentalist ideology. Despite their claim to be acting in solidarity with the disenfranchised, they have little regard for the regular people of all races effected by their barricades. All of their appeals to white guilt and anti-colonialism are a thin veneer to mask their frenzied desire to end all pipelines.