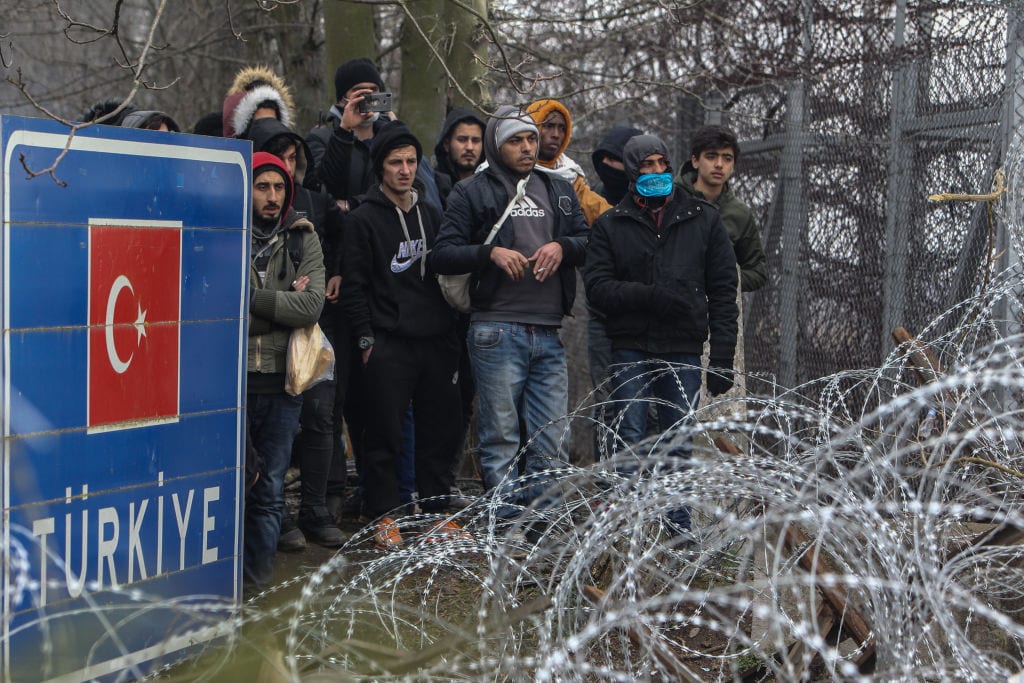 This far, and no farther.

Not all pipelines carry oil and gas. For the past five years, a human pipeline has sprung up, connecting "refugees" from their hellish homelands in Afghanistan and Syria with the desirable precincts of Greece and Italy. That the vast majority of them are not entitled to asylum under laws dating back to the end of the Second World War and designed to prevent a second Holocaust, matters little -- not when they can be used as a weapon against the West.

So Turkish strongman Recep Tayyip Erdogan’s provocation in opening Turkey’s borders to the West so that thousands of “migrants” might once again invade the territories of his fellow NATO allies really ought to be the last straw for the lands of Christendom. At war with the Seljuk Turks since they first invaded the Eastern Roman Empire in the 11th century and defeated the Byzantine emperor at the crucial Battle of Manzikert in 1071, the West suffered an existential threat from the Islamicized central Asians until well into the 17th century. At the Battle of Vienna in 1683, the Ottoman Turks (successors to the Seljuks) were finally halted in their quest to invade Europe and conquer Rome.

Fast forward to 2015, when the so-called “migrant crisis” – a Muslim invasion by another name, this one conducted by fighting-age men in trainers, carrying cell phones and pleading “refugee” status in order to take advantage of western charity and guilt – roared through eastern and southern Europe, heading for the rich countries of the European Union, particularly Germany and the United Kingdom. In a blunder of historic proportions, outgoing German chancellor Angela Merkel foolishly welcomed a million or more mostly young men from Muslim lands into the heart of central Europe – their historical goal.

This invasion force first had to traverse the bulwark countries of Greece, Serbia and, especially, Hungary, leading to a sharp division in the contemporary EU: the areas that had suffered most under Islamic rule, such as Hungary and Balkans, turned their faces against the “migrants,” while hitherto unscathed western nations like Italy, French, Germany, Britain and the Scandinavian countries continued to embrace them, at their cultural peril.

What has happened since has been eminently predictable. In the wake of widespread  disruption Hungary has erected a fence along its eastern and southern borders. Poland – whose elite Winged Hussar cavalry was instrumental to victory at the gates of Vienna – has adopted a policy of zero immigration from Muslim lands. France, meanwhile, has suffered from rioting and an outbreak of church burning, Germany and Sweden from rape, molestation, arson and murder sprees, and Britain has been subject to the “grooming” of its girls and young women by Pakistani (“Asian,” in Fleet Street parlance) rape gangs.

Re-enter the Turks under the Islamist Erdogan, who views himself as the successor to the caliphs whose rule ended with the collapse of the Ottoman Empire after World War One. Like Vladimir Putin in Russia, who wishes to recreate the Czarist and Soviet territorial empires under Russian hegemony, Erdogan hopes to restore the ummah under Turkish rules. To that end, he has abrogated the reforms made by Mustafa Kemal Atatürk, who established a secular Republic of Turkey in 1923, abolished the caliphate the following year – bringing for the first time to Islam the idea of separation of church and state –  and brought Turkey into the family of civilized nations and, ultimately, in 1952, into NATO.

Turkey in the North Atlantic Treaty Organization, however, only made sense in the context of the Cold War, providing the Americans with a forward operating presence close to the Soviet Union, including the big air base at Incirlik, from which it operated the U-2 spy planes. Even today the base remains useful, serving as a staging area for American operations in the Middle East.

By greenlighting the invasion of Europe by Muslim Syrians and Afghans, Erdogan has abrogated Turkey’s NATO bargain.  Which means that the West – which admitted Turkey to NATO with the understanding that it stay secular – needs to rescind its deal with Turkey.  Turkey was always a marginal member of NATO (it stayed neutral throughout almost all of World War II and fought on the wrong side during World War One), and now that it has abandoned secularism in favor of recrudescent Islamism, which historically has been incompatible with the West, its presence no longer serves any useful purpose. The country’s meddling in the Syrian crisis, its war against the U.S.-allied Kurds, and its increasingly cozy relationship with Russia make Turkey more of a security risk than an asset.

Alas, NATO is akin to the Hotel California, with this twist: you can check out, but you can never be 86ed. There is no way to expel a member – and Turkey knows it.

With many displaced persons in his territory, the Turkish dictator has been holding them as hostages, to be used as blackmail against the West as he goes his increasingly anti-Western way.  That his way is not our way matter little, neither to Erdogan or the western media, which has long preferred the sob story of “refugees” to the historical realities of Realpolitik. The “refugees” are often sentimentalized in the Western press as “just wanting a better life.” But so what? So does everybody. Economic migrants are rightly not regarded as legitimate refugees.

Still, economic migrants (which is what most of the “refugees” are) are not entitled to legitimate refugee status, a legal concept codified after World War Two during the displacement of millions of people. So-called DP camps dotted Europe as the victorious Allies confronted the thorny legal difference between “refugees” (those who could not return to their homelands) and “displaced persons” (those uprooted by the war who could return as conditions allowed).

It’s an important distinction. No one is truly a “refugee” if he or she can return to their homeland, even after a time spent in a DP camp. When the Americans finally leave Afghanistan, no Afghan will be a refugee.  When the Syrian civil war is finally sorted, no Syrian is a refugee. No one fleeing his own homeland’s cultural, economic, or civil dysfunction is, by definition, a “refugee.” The way for Syrians to improve Syria -- a Roman province as far back as 64 BC and a center of early Christianity -- is by staying home.

That the flashpoint is once again Greece should come as no surprise. Recall that Byron, one of Britain’s greatest poets, died at Missolonghi fighting for Greek independence from the people who turned the Parthenon into a mosque and an ammunition dump. As recently as 1974 Greece and Turkey came to blows over the island of Cyprus, which remains divided today. In the current crisis, the Greeks have deployed troops to their land borders, and their navy to the littorals.  The memories of Thermopylae, although distant, echo still.

Will we heed them? This is no time for political correctness. With the imminent end of America’s forever war in Afghanistan, it’s time for a complete re-assessment of our presence in the Middle East. It’s also past time for Turkey to be gone from NATO, and to be understood as the enemy it is, rather than the ally that it was.