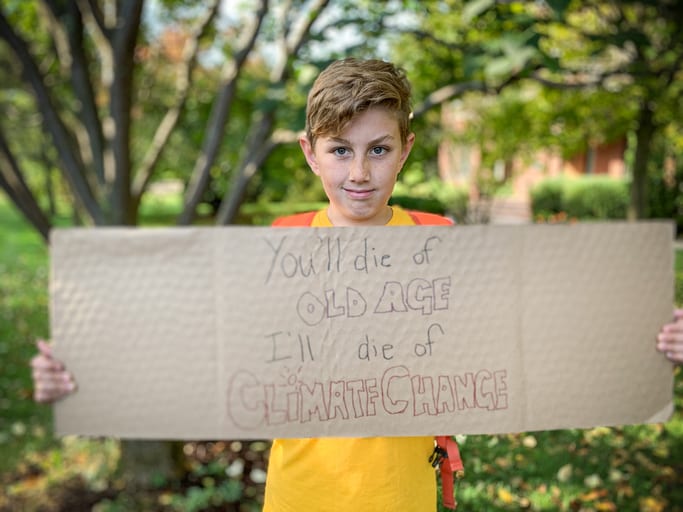 Of all the cruelties the Henny Pennys promulgating the "climate change" hoax wish to inflict on their neighbors, surely the cruelest is the effect their ridiculous end-of-days rhetoric is having on the children. Helpless pawns in the hands of their teachers and parents, who preach the Green Revolution with the ardency of all true believers who would rather die themselves than to be proved wrong, the kids are not all right. Case in point:

A growing number of children are being affected by eco-anxiety – concern about ecological disasters – new research suggests. In order to find out more about how children feel about climate change, BBC Newsround conducted a survey of 2,000 eight to 16-year-olds. The poll showed that young people are feeling frustrated and anxious about the state of the planet with 80 per cent saying the problem of climate change was important to them, and more than a third saying it was very important. Nearly three quarters (73 per cent) added that they were worried about the state of the planet right now, including 22 per cent who say they were “very worried.”

There's plenty of anti-children viciousness on the loose these days, from those who butcher their children in the womb, to those who disfigure their kids' bodies and hormonally wreck them with "gender re-assignment" surgery. Terrifying them with boogeymen visions of apocalyptic "climate change" is lower on the scale, but it's not nothing. Rather, it's a calculated enormity designed to employ kids as cultural land-mine exploders and then to count on normal parents' wishes to protect and shelter their offspring by promising to do whatever it takes to calm them down. That "whatever it takes" involves destroying Western civilization doesn't seem to bother them.

Leave it to the crier-in-chief of the climate scare media, the New York Times, to have led the way. Already last summer they were banging the tin drum of doom and gloom and woe-is-us, what about the children? The piece opens, as it often does with the Times, with an argument from authority from its favorite (indeed, only) authority figures, psychologists and psychiatrists:

Sunday’s episode of “Big Little Lies,” the HBO show about five women living in Monterey, Calif., included a second grader who had an anxiety attack after discussing climate change with a teacher. The girl worried the world was going to end.

Psychologists say the way parents and teachers talk about climate change with children has an effect on their young psyches. “A lot of people, when they talk to kids, are processing their own anxiety and fears,” said John Fraser, a psychologist and chief executive of NewKnowledge, a social science think tank that studies health and the environment. “Do you think kids won’t be scared, too? As a culture, we haven’t developed good tools to talk about these things.”

The point is there would nothing to talk about if only Hollywood, the media, teachers, and shrinks would shut up about it.  But no, the malignant New Luddites must have their say -- for the good of the children, of course:

Dr. Swim and Dr. Fraser agree that the next step is discussing the process of climate change and its effect on the planet. This is essential to demystifying the concept of global warming. But it requires parents to do some homework, too. Many parents, educators say, have as much to learn as their children.

At the New England Aquarium in Boston, William Spitzer, the vice president in learning and community, said educators there often engage families by using animals as a starting point. Myrtle, an 80-year-old green sea turtle that weighs 500 pounds, is quite popular among visitors.One way to explain climate change, he said, is to use the analogy of the Earth being covered by a blanket of heat caused by, among other things, burning fossil fuels. That action creates more carbon dioxide, he said, which “causes the temperature of the ocean to rise.”

That's bunkum, of course. Oceans have been changing forever; indeed, sea levels have been rising and falling for eons, without any assistance from man.

A study by the University of York found evidence for a period of enhanced pre-industrial sea-level rise of about 2-3 millimetres per year in three locations — Nova Scotia, Maine and Connecticut, which were largely natural, without any human constructions or man-made factors.

These three locations are partly related to the North Atlantic Oscillation – a large-scale atmospheric pressure see-saw over the North Atlantic region – and to periods of enhanced ice melt in the Arctic, said the authors of the study, whose findings are published in Geophysical Research Letters.

Previous studies have shown that, since the 1950s, rates of sea level rise along the Atlantic coast of North America were faster than the global average – leading to this region coming to be known as a sea level rise “hotspot.” However, lead author Prof Roland Gehrels, from the University of York’s Department of Environment and Geography, said this earlier rapid episode of sea level rise in the 18th Century wasn’t known before. To find out what global warming is doing to sea levels today, the team examined the base level from historical times.

“In the 20th Century we see rates of up to three or four millimetres per year, faster than in any century in at least the last 3000 years. In the 18th Century they were slightly slower, but still much quicker than you would expect for the Little Ice Age, partly because the Arctic was relatively warm during the 18th Century,” he noted.

It was a pre-industrial phenomenon, so there were no anthropogenic forces – or human influences, he explained. In the 20th Century they might have played a key role but well before the industrialization, those rapid episodes of sea level rise on the north east coast of North America in the 18th Century might have been due to natural causes, he said.

Amazingly, there are still some voices of sanity, making this salient point: since "climate change" is taught in every school as "settled science," what is left to do? Why, ratchet up the hysteria!

When it comes to climate change, the normal rules of politics and the usual ways that adults relate to children have all been abandoned. Adults, it seems, now defer to children. {The climate-change pushers] They acknowledge that it is part of geography and science. Their argument is that they have ‘barely learned about the climate crisis at school despite it being on the curriculum’. They want it to be taught more often, in more depth, and, as their words reveal, for it to be taught as a ‘crisis’, rather than just another topic to be covered. And who can blame them? When children are bombarded with doomsday scenarios about irreversible global warming leading inevitably to large numbers of people dying, it is hardly surprising that they feel scared. It is not unreasonable to panic, or to want to know more, if you are told again and again that there is only 12 years to save the planet, that the future is uncertain and that adults have left you with a catastrophic mess to sort out.

Children are not taught too little about climate change: they are taught too much. They are made scared, and then abandoned by adults unable or unwilling to encourage a more critical approach to the discussion. Teachers could usefully help children by putting seemingly apocalyptic data into context. They could show how tipping-point dates have, since the time of Malthus, been passed, with the world’s population not only continuing to exist but thriving. They could show that even the most secure scientific knowledge around climate change is still contestable.

Instead, having scared children about the future of the planet, adults then defer to them for solutions. Schools are looked to, not to turn out knowledgeable scientists and critical thinkers, but to produce climate activists proficient in letter-writing and banner-making. Turning education over to political activism – even if it is for a cause that many agree with – is an abdication of adult responsibility.

This is a kind of madness akin to the Children's Crusade of the early thirteenth century, in which fervor combined with ignorance combined with moral dudgeon combined with an utter inability to take on the job resulted in the deaths and enslavement in North African bazaars and brothels of thousands of European young people.

The fact is, Henny Penny stories never end well for anybody: after Henny-penny (Chicken Little in the American version) decides the sky is falling, she enlists Cocky-locky, Goosey-poosey and other barnyard animals to join her mission to inform the King of the impending calamity. Finally, they encounter Foxy-woxy, who invites the tasty creatures to shelter in his lair. You can guess what happens next:

But Foxy-woxy had made two bites at Cocky-locky, and when the first snap only hurt Cocky-locky, but didn't kill him, he called out to Henny-penny. But she turned tail and off she ran home, so she never told the king the sky was a-falling.