Saving Economic Recovery from the Greens 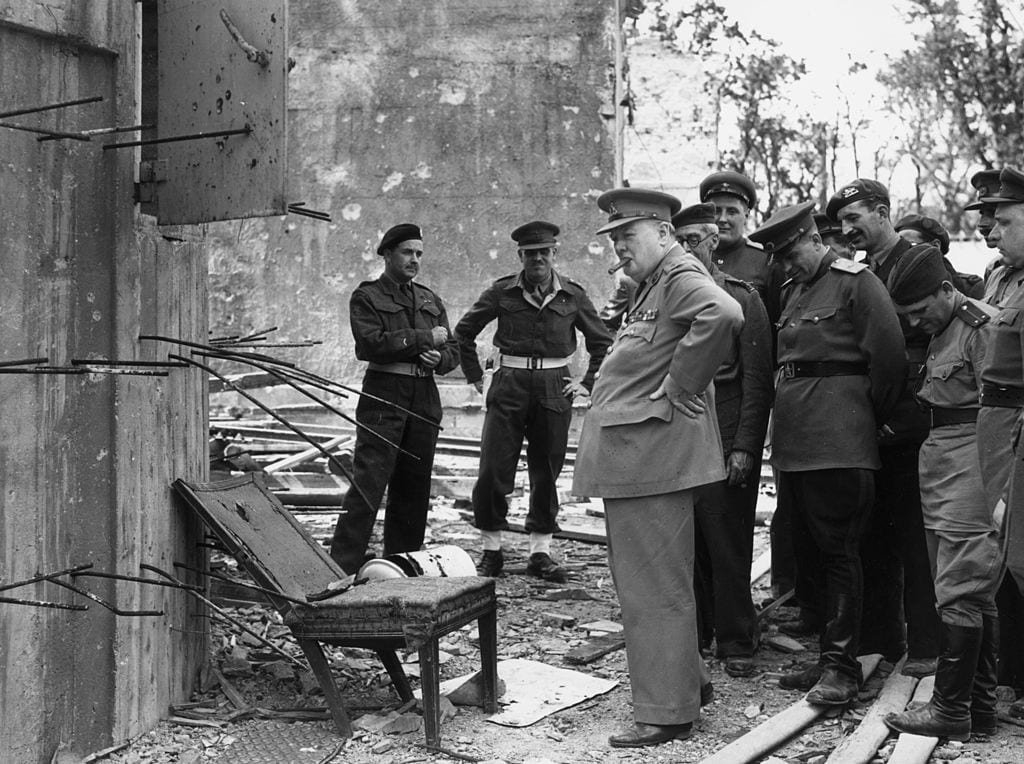 You're gonna need a bigger Wirtschaftswunder.

As the end of the Second World War approached, the Allied nations began serious preparations for peacetime policy and reform. That was felt to be an overriding duty owed to their armed forces fighting and dying in the field; it was fueled by a strong sense of guilt that they had failed in this duty after the Great War; and the content of that reform was largely shaped by two general ideas in wartime circulation.

The first was that future governments must harness science for the benefit of society; the second was that state planning was manifestly superior to the unplanned chaos of free market competition. The cant phrase was that as we had planned to win the war, so we must now plan to win the peace. Together these two ideas would shepherd us towards a better world. Films, plays, and novels as well as White Papers were published along these lines.

Critics would patiently make a case against these ideas. My first boss on the Daily Telegraph, whenever a colleague proposed to tackle some social problem “like a military operation,” would ask sardonically: “Have you ever served in the Army?” But it’s hard for even clever people to make a dent in an amorphous ideological atmosphere.

As a result the first idea triumphed in the United States, where science married government following the Manhattan Project, gave birth to a military-academic-industrial complex, and has lived a luxurious but not always honest life dancing to her mate’s priorities ever since. The second idea of state planning won out in Britain, in the Allied Control Commission running Germany for the first few years of peace, in several other Western European states, and of course in an “Eastern Europe” under Soviet control.

The results of both we’ll see below.

They’re important because the same kind of debate is now being held in Europe and North America over what policies we should be pursuing in the relatively near future as we emerge from the Covid-19 pandemic, and the lockdowns imposed to defeat it, to find economies ravaged by several months of inactivity and losses. Estimates of the severity of those losses vary greatly from a fall in GDP of 6.5 percent to one of 35 percent.

And when we recall it took about six years for many European countries to return to the levels of prosperity they enjoyed before the 2008 financial crash (made worse in Europe by the grumbling Euro crisis that may be about to re-emerge in Italy), we must acknowledge the seriousness of the challenges we’ll face and the difficulty of choosing between alternative choices. .

Debates over which recovery policies to pursue fall into two categories. There is the more or less eternal clash between those favor a free market policy of liberating enterprise, cutting regulations, and stabilizing the currency in order to attract investment and increase economic growth and those who believe in state planning, public investment, high levels of regulation, and inflationary finance to do the same.

Intellectually speaking, that conflict was decided by the early fifties in Europe. As the distinguished Hungarian economist, P.T. Bauer used to argue, the workforces in countries on both sides in the war were already skilled, educated, and in possession of attitudes and aptitudes conducive to economic success. They already had or were human capital.

How would they perform under different policy regimes? The answer was provided by the sluggish postwar economic performance of statist Britain under Clement Attlee’s Labour compared to the rapid recovery of both Germany and Italy under Christian Democrats whose finance ministers pursued orthodox policies of deregulation and anti-inflationary finance. Italy returned to prewar levels of prosperity by 1949, Germany a little later. Both enjoyed “miracle” economies by the mid-fifties; the Brits had to wait for Margaret Thatcher in 1979.

So we know the policies needed to provide a speedy return to prosperity.

But those working on post-pandemic recovery policies have adopted a second aim which greatly complicates any plans to do that. The European Commission, most European governments, notably those led by Angela Merkel and Emmanuel Macron, the United Nations, the Democratic opposition party in the U.S., the Pope, the Davos crowd of morally correct CEOs, and bien-pensant liberal opinion generally supports a  “Green New Deal” of recovery on the back of a massive reduction of carbon emissions which is rather like eating without food or swimming without water.

If my description sounds somewhat over-critical, here is the EU’s own account of what the "European Green Deal" (click on the link) means: “a modern, resource-efficient, and competitive economy where:

I will treat that last item as a meaningless piety until the EU manages to come up with a financial and currency deal that rescues the economies and unemployed youth of southern Europe left behind by the depredations of the Euro. First things first. On the other hand, I will charitably assume that the first item will not be achieved by “exporting” the EU’s carbon emissions to other parts of the world, mainly Asia, by investing in factories that operate under looser climate rules. As is done now.

That leaves item two. If my charitable assumption is correct, economic growth can only be de-coupled from resource use—to the extent that the economy grows while the carbon-based forms of energy that currently power it are massively cut—by new forms of energy as yet undiscovered or by scientific advances that allow us to use carbon-based energy while eliminating their emissions.

And here the Green New Deal faces a serious problem: Science isn't Magic. It's a powerful engine of progress but it doesn't always deliver exactly what you want when you want it. For instance, most of the new alternative forms of energy currently in use—the so-called “renewables”—are either unreliable (i.e., winds don’t blow on schedule, not all days are sunny) or expensive to produce, commercially risky, and in need of subsidies.

Similarly, technologies that would allow us to “capture” carbon emissions and disperse them harmlessly have yet to be developed. That means not that they will never be developed, but that they might remain bright ideas for a long time and be prohibitively expensive compared to existing energy sources when they eventually come online.

And those caveats apply to other new technology “fixes” on which the Green New Deal implicitly relies. They explain too why the deal is so heavy on vague uplift and social justice rhetoric in its “roadmap to actions” section: “supporting industry to innovate,” for instance, and” “turning the political commitment [to making Europe climate-neutral by 2050] into a legal obligation.” Its rhetoric can’t be matched by its proposed actions.

What becomes crystal clear is that, barring some huge technological miracles, the only way that Europe can grow without net emissions of greenhouse gases by 2050 is by diverting the whole of any economic growth away from increasing the living standards of its peoples into transforming its economy along puritan green lines. Even then it will find it hard, probably impossible, to avoid actually depressing such living standards by a considerable amount.

In short, Greenery can’t rely on science to deliver the goods for it.

That, of course, is exactly how the Soviet Union destroyed itself. It diverted the proceeds of production (and of massive borrowing from abroad) from consumer living standards to investment in military technology, thus becoming as someone said: “Upper Volta with nuclear weapons.”

EU leaders can’t admit any of this, and they may well feel that—in response to pressure from their own Green parties (with whom some are in coalition)—they have gone much too far in promising this transformation. President Macron’s fierce threats to place sanctions on countries that don’t join the Paris Green accords would suggest so. It’s a classic attempt to get other countries to assume the burdens that would otherwise cripple France in competition with them.

Nations have sometimes made commitments they have no intention of fulfilling for a quiet life diplomatically. But repeated commitments create a general political atmosphere in which retreating from them looks like cowardice, bad faith, and even cynical duplicity. The existence and growing political clout of extreme Green parties and NGOs make that doubly difficult. Those movements have no qualms about adopting policies that will bring about a severe drop in the standard of living of countries, including their own, that they feel are looting the world’s resources. In fact it’s their policy is to bring about such a change—and in particular to use the transition from the recessions caused by the pandemic not to restore the living standards of 2019 but to foster a humbler, poorer, greener Western world.

In the last week, sensing a danger that the EU would begin to soften its flagship Green cause in order to revive European economies, environmental pressure groups have begun to make the case that restoring prosperity comes second to moving to the new green economy—and, more honestly and ruthlessly, to propose that some industries either shouldn’t return at all or at the very least should return in a shrunken form.

Their candidates for this reduction in size and importance are: the airline industry, the shipping industry, and (more surprisingly) the farmers who are in the firing line because the Greens argue that the Common Agricultural Policy (CAP) damages the environment, privileges large agri-business, and takes a massive 38 percent of the EU’s budget which could be used on greener causes.

All three industries have clout, strong lobbying representation in Brussels, and strong positions to defend. The airlines have the advantage that when the pandemic has faced from memory, people will want to vacation and visit their second homes abroad. The shipping industry likewise, and it has already sounded the alarm. France’s farmers, which have successfully defended the CAP against earlier attacks from, for instance, Tony Blair and Margaret Thatcher, have always enjoyed the support of French governments. They're unlikely to lose that now.

But these industries—and the customers they serve—will need to organize for a real fight. They may have the larger public on their side, a popular cause in economic recovery, and an intellectual case in how recovery was achieved after 1945. But their enemies are well-entrenched in the media, the bureaucracy, the law, and politics. And they have the great unseen benefit of a political atmosphere in which saving the earth is the unassailable political virtue—and the European Union its loudest champion.

Until it dispels that myth, industry will have an uphill fight—and the EU a mass of of embarrassments.

4 comments on “Saving Economic Recovery from the Greens”