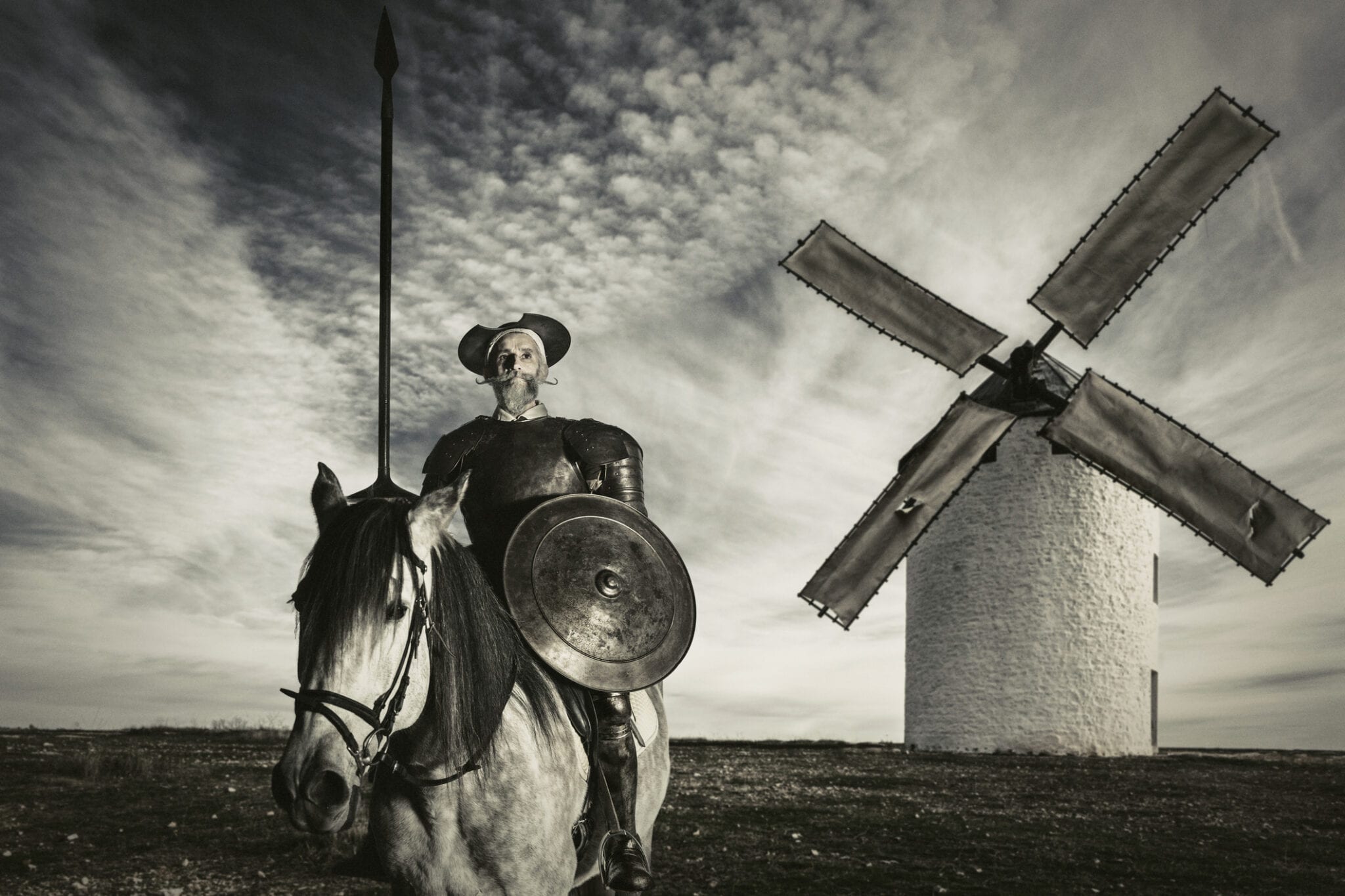 A friend of mine of scientific pedigree, who I won’t name on the off chance I am misinterpreting him, suggests we might madly burn coal to make electricity and then scatter the residual ashes over the oceans to make them more alkaline. More alkaline oceans apparently absorb more CO2. And, Bob’s your uncle, problem solved. Another friend says this won’t do because the oceans are so vast it will make no difference. I also worry about the fish. Is all of this outlandish in any event?

Well, recall the suggestion by some scientists in 1975, when global cooling was the scare du jour, that soot might be strewn across the Antarctic to absorb heat from the sun. That rates more highly in the outlandish stakes, I think. But if you were to stand back and imagine something really, really, mad, then might you not come up with thousands upon thousands of giant windmills?

Imagined madness is reality. I googled, I’m ashamed to say, given the wokeness of that cancel-culture organisation, and found a figure of 341,000 wind turbines in the world as at September 2017. I found it hard to get an updated figure but, obviously, it will be bigger. The height of these totem poles (term used advisedly), including blades, is 100 metres and more. And, they’re getting taller. Reportedly, there is one in Germany, near Stuttgart, which soars some 246 metres. Now that’s got to be an eyesore.

As it’s windier the higher you go, who knows where it will end. Birds and bats won’t be the prey. Watch out aircraft and drones. And please parachutists be careful.

Apparently a 2-megawatt wind turbine requires a total area of about half a square kilometre, to allow for the circumference of the blades, the need for considerable space between each turbine and the need for a wind farm to have a buffer zone. So, on that basis, the area of land occupied by 341,00 turbines would be about 170,000 square kilometres, give or take. Michael Shellenberger (Apocalypse Never) refers to research which found that wind farms require “roughly 450 times more land than a natural gas power plant.” How that computes in acreage I don’t know, but you get the drift. 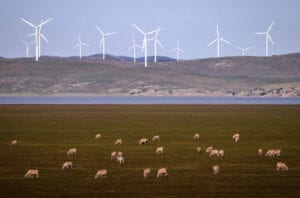 "Look there, Sancho Panza, my friend, and see those thirty or so wild giants, with whom I intend to do battle and kill each and all of them."

Wind now supplies around 5 percent of the world’s electricity (7 percent in Australia -- a pyrrhic boon indeed). If it were to supply 35 per cent -- which I am confident is the lower end of the range desired by green activists and certainly by the subsidy-addicted carpetbaggers on the gravy train -- then about 1.2 million square kilometres would appear to be required.

That is equivalent to Tasmania or Switzerland or West Virginia, times eighteen. That’s a lot of land when you consider the need to keep wind farms fairly close to power grids to keep transmission costs manageable. Of course, there is the sea. Even so, the blot on landscapes (and seascapes too) will surely be insufferable except to those whose pagan religiosity is excited by the sight.

What benefit have these towering monstrosities brought, you might ask innocently, if you’re abjectly un-woke. Presumably, they have reduced CO2 emissions. It’s too hard to lay bare this presumption.

You would need to calculate the amount of CO2, and perhaps other greenhouse gasses, which result from the mining of the minerals and ores used in their making, their manufacture and transport and installation, and their maintenance and eventual disposal. And you have to add in the emissions from the back-up power that is essential to have when the wind doesn’t blow. Where the sum ends up, I don’t know. But, as I say, I presume over a period of the life of a turbine, say, 20 years, a saving in CO2 emissions will accrue.

However, thus far, the saving is not visible on the world stage. CO2 emissions worldwide continue to grow year-on-year, at least they did up until 2020. Covid has done a splendid job of reducing emissions in 2020. But, relying on governments reacting panickily to a pandemic is not, hopefully, an enduring strategy. Of course, it is plausible to argue that CO2 emissions would have been even higher but for wind, and that may be true. Still, the overall picture doesn’t look impressive. Where’s the tangible gain for the pain? 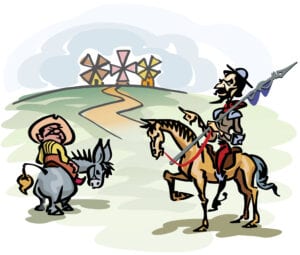 "When life itself seems lunatic, who knows where madness lies?"

Part of the pain has been felt in electricity prices – not to mention blackouts. Residential electricity prices in Australia have near doubled in the past ten years, as cheap coal power has been driven out by intermittent wind power (and solar). Alan Moran, Australian commentator on all things climate, in a recent report (The Hidden Cost of Climate Policies and Renewables, 19 August 2020) estimates that “government-imposed climate policies and renewable subsidies account for 39% of householders’ electricity costs.” And that is not the end of it. Government subsidies should logically be added back into electricity prices to get a true price. After all, those who consume electricity pay taxes to pay for the subsidies.

Part of the pain is the loss of competitive advantage and, thus, manufacturing jobs. The competitive advantage Australia used to have in generating cheap energy from coal is now lost. Using International Energy Agency figures, the average price per kWh for residential electricity is roughly twice that of the United States and Canada, and three times that in China; which, surprise, surprise, imports lots of Australian coal. As does India. Both are building new coal power stations as Australia’s are closing. Incidentally, Germany’s prices are over 40 percent higher again than Australia’s.

Taking a lead from research in Spain, Moran argues that for every green job created 2.2 others are lost. It is obviously hard to back up this estimate. At the same time, it would be surprising if a country with a relatively small population, suffering a tyranny of distance, yet with an abundance of high-quality easily extractable coal, could afford to give away that latter advantage and have its manufacturing sector remain unscathed. It was bad enough, as it was, without the onset of ruinously high energy prices.

The Australian Bureau of Statistics reported (10 December 2019) on job growth in Australia over the 25 years from September 1995 to September 2019. Total jobs filled increased by 64.6 percent. In contrast, manufacturing jobs fell by 270,000; from 13.4 percent of total jobs to just 6.3 percent. Manufacturing has been significantly offshored. The last remnants of car manufacturing in Australia disappeared at the beginning of this year. High energy prices won’t help keep what remains of Australian manufacturing. The steel and aluminium industries, heavy users of electricity, are always on the brink.

Want to go all Greta Thunberg and penalise the whole world and all of mankind by going to wind and solar? Fine, muttered dubiously, if self-denial is ubiquitous, omnipresent, universal. But western industrial nations should be wary of getting too far ahead of the pack, or ahead at all. In Australia, sadly, both sides of politics differ only in their degree of enthusiasm for striding out and embracing national self-harm.