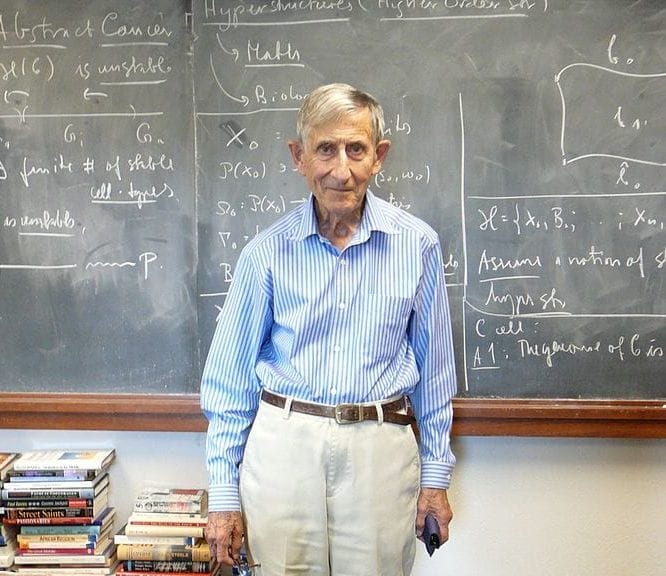 Internationally renowned theoretical physicist and mathematician Freeman Dyson passed away on February 28 at the age of 96.

Even this description seems too small to encompass Dyson's intellectual acumen and accomplishments. Born in Berkshire, England, in 1923, from a young age Dyson had an insatiable curiosity. He was known for spending hours each day poring over volumes of the Encyclopedia Britannica, which he read over and over again, cover to cover, as well as the science fiction novels of Jules Verne and H. G. Wells, which imaginatively explored the potential of scientific inquiry and discovery.

At the age of 15 Dyson won a scholarship to study mathematics at Trinity College, Cambridge, though he took a leave of absence during the Second World War to serve as a civilian analyst for the Royal Air Force's Bomber Command where he was charged with devising more efficient bomber formations. After the war, he took his BA at Cambridge and eventually relocated to Cornell University in Ithaca, N.Y. to work on his PhD in physics.

He never did finish that degree -- shortly after arriving at Cornell, Dyson began making serious contributions to the field of theoretical physics, most famously demonstrating that two rival formulations of quantum electrodynamics were in fact mathematically equivalent, an insight he came to while riding across the country on a Greyhound bus. It helped earn a Nobel Prize... for the developers of the complimentary theories, not the man who showed that they were complimentary. In any event, this made a PhD seem superfluous. Cornell made him a professor, and shortly thereafter he relocated to Princeton's Institute for Advanced Study where his colleagues included Robert Oppenheimer and Albert Einstein and his job description was, essentially, "thinking big thoughts." There he remained, applying his boundless curiosity to the scientific problems of the day, for more than 60 years.

One of the problems he applied himself to over the last several years of his life was that of the increased concentration of carbon dioxide in the atmosphere and its relationship to the temperature of the planet, otherwise known as the "climate emergency" believed in by "the overwhelming majority of scientists." If you've read Mark Mendolvitz's recent contribution to The Pipeline, you know that those references to the majority of scientists, their consensus, is really a propaganda tool. Freeman Dyson was one of those who vocally objected to that propaganda.

A testament to Dyson's stature is the fact that the all of the lengthy obituaries his death occasioned make it a point to mention his climate skepticism as a kind of eccentricity. Here's what the New York Times says on the matter:

Relishing the role of iconoclast, he confounded the scientific establishment by dismissing the consensus about the perils of man-made climate change as “tribal group-thinking.” He doubted the veracity of the climate models, and he exasperated experts with sanguine predictions they found rooted less in science than in wishfulness: Excess carbon in the air is good for plants, and global warming might forestall another ice age.

In a profile of Dr. Dyson in 2009 in The New York Times Magazine, his colleague Steven Weinberg, a Nobel laureate, observed, “I have the sense that when consensus is forming like ice hardening on a lake, Dyson will do his best to chip at the ice.”

He considered himself an environmentalist. “I am a tree-hugger, in love with frogs and forests,” he wrote in 2015 in The Boston Globe. “More urgent and more real problems, such as the overfishing of the oceans and the destruction of wildlife habitat on land, are neglected, while the environmental activists waste their time and energy ranting about climate change.” That was, to say the least, a minority position.

[Dyson's] technophilia may explain his apostasy on global warming. In the early 2000s, he drew furious criticism from other scientists and environmentalists for his views on climate change. Although he did not deny the Earth was warming — he was not a global warming denier in the strictest sense — he thought the environmental movement had overstated the threats to the planet. “I just don’t see any evidence that global warming is particularly dangerous,” he said.

That view is not shared by the overwhelming majority of scientists. Mr. Dyson’s fringe position reflected a deeper philosophy: that change is coming, inevitably, and we should embrace it and not fear it.

It is telling that the Post's obituary writer chose to describe Dyson's views as "apostasy," as that word points towards the religion which has grown up around climate change. Dyson himself viewed the climate discussion in religious terms, and so often employed a related term to describe himself: "heretic." He spoke of himself this way because he felt that it was his special burden to "challenge the prevailing dogmas of today."

Interestingly enough, for a man of such prodigious intellect, much of Dyson's writing on the climate question is focused on calling for epistemic humility. In his short essay "Heretical Thoughts on Science and Society" Dyson said:

I have studied the climate models and I know what they can do. The models solve the equations of fluid dynamics, and they do a very good job of describing the fluid motions of the atmosphere and the oceans. They do a very poor job of describing the clouds, the dust, the chemistry and the biology of fields and farms and forests. They do not begin to describe the real world that we live in. The real world is muddy and messy and full of things that we do not yet understand. It is much easier for a scientist to sit in an air-conditioned building and run computer models, than to put on winter clothes and measure what is really happening outside in the swamps and the clouds. That is why the climate model experts end up believing their own models.

His own study of the relevant literature led him to conclude that "We don’t understand climate, climate is very complicated and we are only beginning to understand what the effects of carbon dioxide may be. They’re maybe good or they’re maybe bad. But it’s not clear." Still, he went on to observe that

As the Times obituary mentioned, Dyson considered himself an environmentalist, and as such he objected to the way that many of his fellow environmentalists spoke about CO2 as if it were a pollutant:

CO2 is good for us, good for the plants, good for the food. CO2 is not a pollutant.... Coal is a pollutant. It produces all kinds of poisons which really are bad for human health and bad for vegetation too. So we should by all means try to get rid of coal. But the substitute of coal, which has worked extremely well in this country, is natural gas. Natural gas is still a fossil fuel, it still has some carbon but only half as much as coal and it has none of the bad chemicals.

Consequently he believed hydraulic fracturing - fracking - to be a great boon for society, an example of humans using technology to creatively interact with nature and improve the environment:

What we need is cheap technologies which will pay for themselves. Of course a good example is fracking. Fracking is a huge success economically. It’s cheap and convenient… Actually it's producing a substantial reduction of emissions in this country. Because of fracking we are now actually producing less carbon dioxide than we were. In Europe the emission of carbon dioxide is rising because they are burning more coal.... So what’s happened in [America] is that we’re substituting natural gas for coal. As a result reducing pollution and also reducing global warming, if that is what you want. So the rest of the world can do the same thing.

The religion of "global warming" -- a product, in Dyson's estimation, of the government grants which inevitably go to those who "scare the public" and "lazy" media -- needs heretics like Dyson desperately, to poke holes in its grandest assertions and disabuse normal people of its extravagant claims. Freeman Dyson performed that task exceptionally well. Hopefully other young scientists will pick up where he left off.

What COVID and 'Climate Change' Have in Common