Covid, 'Climate Change,' and the Theory of Everything 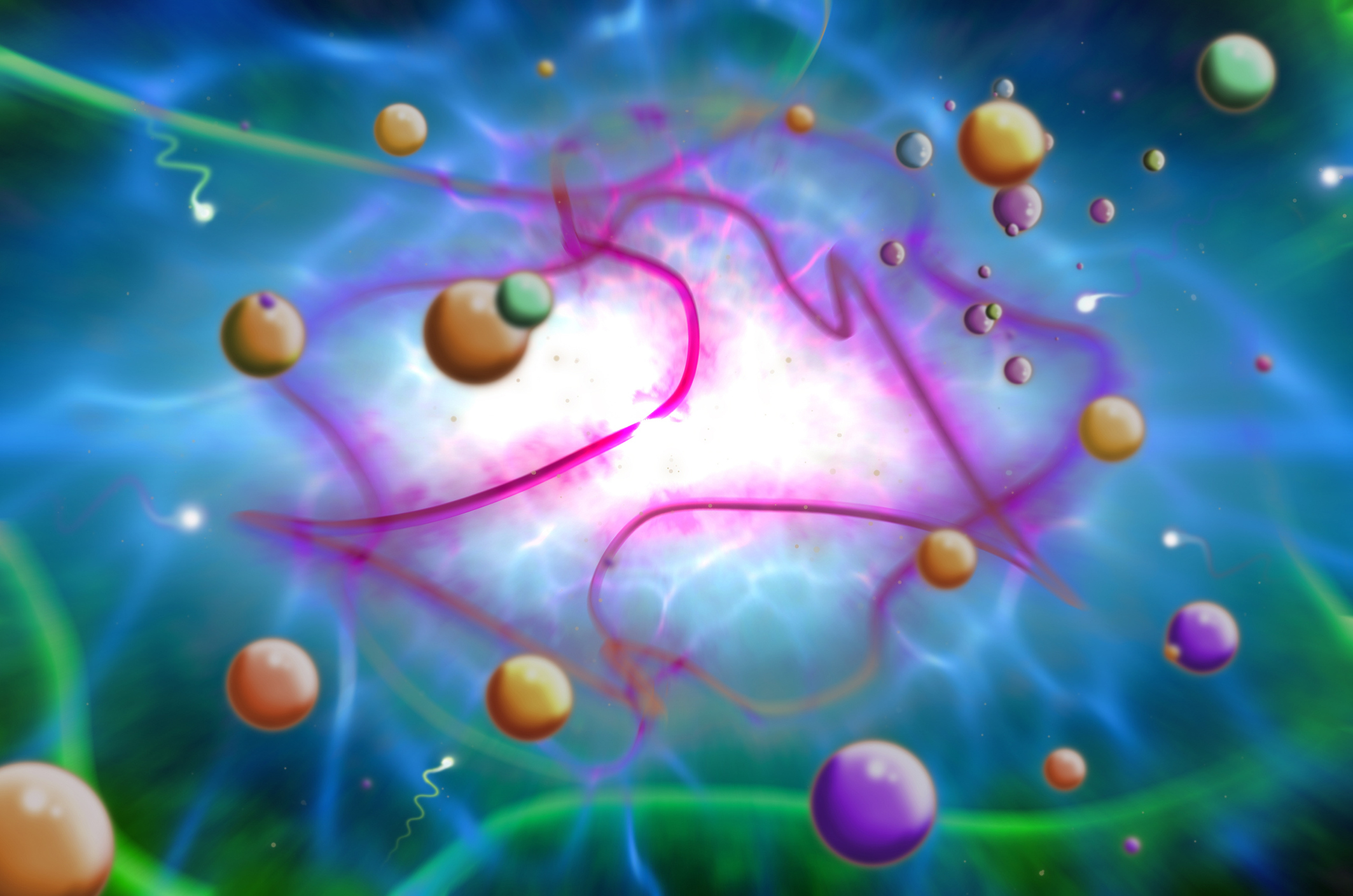 We're all in this together, but you're up the creek.

Since classical physics seemingly clashed with quantum mechanics, scientists have tried to find an overarching theory. Searching for the Theory of Everything is the catchiest way to describe the grand quest. My quest is more base than grand, being steeped in political calculation. Yet it has a commonality of sorts with the theory of everything. I’m after a common factor which explains the loss of public support for three political leaders. Each quite different from one another.

My three subjects are Joe Biden, Boris Johnson, and Scott Morrison. According to the polls, support for each of them has plummeted since they were elected. If elections were held today each of them and their respective parties would be routed.

On the political spectrum, Biden has gone from (supposedly) moderately left to green-new-deal junkie. Johnson has gone from an irreverent, freedom-loving Brexit hero to a tax-raising, Covid-panicking, climate zealot. Morrison, true to expedient form, has embraced net-zero to appease wets among his colleagues, to assuage corporate carpetbaggers and, so I understand, to please Scandinavians. 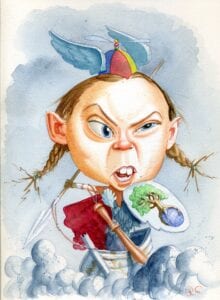 In the past, the issues of the day were more bread and butter than they are now. Generally, the state of the economy determined whether a government was returned or kicked out. "It’s the economy stupid," used to be the theory of everything.

Clearly, inflation is affecting the popularity of Biden. A touch of the past there. But that certainly isn’t playing out in the U.K. or in Australia to nearly the same extent. Nor does the dreaded Wuhan virus tip the balance either way in my view.

My impression is that those seeking safety, and astonishingly they are in their legions, are happy enough with their government. That’s because all three leaders have reacted with feckless paranoia at the least sign of sickness. Moreover, those hardy folk who are prepared to take a risk or two for freedom’s sake have largely been battered into submission by media and government propaganda machines. Being constantly told that your freedom poses a deadly risk to the vulnerable is unnerving.  Who wants to be accused of recklessly killing grannies and grandpas? No one. Game, set and re-election.

Biden has a border problem, as does Johnson to a lesser extent. This undoubtedly affects their popularity. But among which voters? That’s key, as I’ll come to.

Australia has the advantage of being an island continent. It’s easier to keep so-called asylum seekers out. Boats have to travel a fair way. Still, you have to be prepared to turn them back. Under Tony Abbott, prime minister from 2013-2015, they were turned back. If they scuttled their boats, hoping to be rescued and brought ashore, they were provided with life boats and pointed seaward. 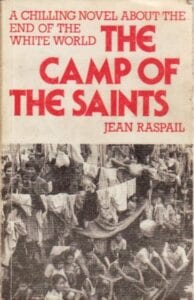 As foretold by prophecy.

Of course, the usual suspects were outraged. However, no political party, except the delusional Greens, has ever risked going to an election promising to overturn the policy of turning back boats. They would like to. But they sniff the votes. The votes they’re sniffing are not those of the inner cities, the professional and corporate types, the public servants, the educators. They’re all now overwhelmingly left-cum-green voters. The votes at risk are in blue-collar outer suburbia, and in regional and rural towns.

John Howard, Australia’s prime minister from 1996 to 2007, won repeatedly by attracting the “Howard battlers.” Voters who in days past would have voted for the Labor Party. This section of the voting block also brought Boris Johnson his victory in 2019, as the so-called “red wall” of Labour constituencies in the Midlands, Northern England and in parts of Wales fell to the Tories. This story applies in similar measure to Donald Trump’s victory in 2016 and also to Scott Morrison’s come-from-behind win in 2019.

It’s not so much the issue as the constituency. Trump appealed to America first; in other words, to old-fashioned patriotism. A lot followed from that. Defending the southern border; protecting American industry from predatory international competition and from onerous regulations; and withdrawing from draining foreign military engagements.

Johnson also keyed into patriotism. Brexit was won on patriotism not on financial calculations. Who's patriotic anymore? You’d mostly search in vain in white-collar inner-suburbia. Patriotism lives among blue-collar workers and in regional and rural communities.

It wasn’t patriotism per se that Morrison tapped into in 2019 but it was related and the constituency was the same. Climate-change apocalypticism threatened the coal industry in Northern New South Wales and Queensland and, with it, the livelihoods and way of life of surrounding communities. The common factor in the victories of Morrison and Johnson and Trump before them was their appeal to the national interest. Their thinking was spot on. 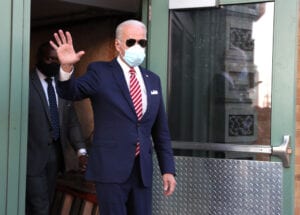 From spot on to derangement.  Climate-change apocalypticism has finally had its way. Nobody illustrated that better than Biden in New Hampshire at the end of 2019:

Anybody who can go down 300 to 3,000 feet in a mine can sure as hell learn to program as well...Give me a break! Anybody who can throw coal into a furnace can learn how to program, for god's sake!

Of course, the extent of Biden’s derangement is a special case. Nonetheless, the common factor in the falling popularity of all three leaders is their embrace of globalism in the place of the national interest. And, hence, their willingness to sacrifice the well-being of multitudes of their citizens in a quixotic quest to cool the planet. Maniacal, inexplicable, but true.

Maybe Biden didn’t really have much of a choice with AOC and Bernie Sanders snapping at his throat. Not so with Johnson and Morrison. Though I suppose, in part excuse, Johnson has his leftist wife, Prince Charles, and David Attenborough to deal with. I can’t find much of an excuse for Morrison. 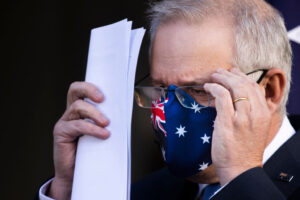 Enemy of the People: Scott Morrison.

Last time he did a Trump and put Australia first. There was a big contrast between his Party’s climate policy and the opposition Labor Party’s. Now they are both aiming for net-zero; bizarrely dependent on unknown future technologies. In the meantime, onward with wind and solar boondoggles; and to blazes with Australia’s fossil fuel industries and the communities which live off them. There will be a comeuppance. As the votes of such communities drift away to conservative-minded independents, Morrison can forget about winning.

By and large, most Republicans understand today’s political landscape, I think. Johnson and Morrison seemingly don’t. Johnson has more time to change course. He won’t. His party needs to change him. Morrison, having swallowed the poisonous climate bait will likely meet his doleful fate. Dispatched to the opposition benches in the forthcoming May election.